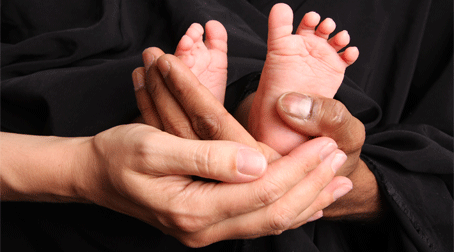 It isn’t easy being part of a mixed race couple.

Just look at the lesbian couple suing because they wanted the sperm of a white man, and they got some black dude’s swimmers. Sure they might have a beautiful biracial girl, but I’m sure they remember how people got all pitchforky over that Cheerios commercial a while ago. I mean, come on, they’re already lesbians, do really they need a little black girl to give them more points on the Sean-Hannity-Hates-You scale?

Like hell they do, and they’re willing to risk the fact that someday, their little girl will find out that her mommies sought money because a little brown girl like her was not on their agenda.

I’m disgusted with their suit, but they are right about needing emotional fortification, because when you’re a member of a mixed race family you attract more attention than a gal with three boobs. People either stare unabashedly or actually break a sweat trying to take their eyes off the “swirl” before them. Luckily, unless you’re in a particularly rednecky area or have run into a truly despicable person, most people’s stares don’t read, “If I only had my robe and hood!”

These days the usual reaction is more like “My, isn’t that a pretty pony?!” It’s like your family is a walking study in racial features. “Get a load of that skin/ hair/ eyes? Are those blue? Well, I’ll be!” It’s like folks have found the best Mr. Potato Head creation ever made and are wrapping their heads around how all the parts came together. These people are curious to see if mixed-race kids have three legs or maybe a face on one side of their ass. How comforted they are to know the truth! Legend has it that their sighs of relief have stirred up several tornadoes.

Staring aside, the real issue is people’s expectations — expectations that give mixed race parents a challenge that begins at conception, if not on the first date! Before my children were even tiny buns in the oven, people were saying how gorgeous they’d be. Can you imagine the pressure!?! Hubs and I are very nice looking people, but we’re not exactly Lupita and Brad.

I mean, what if we failed? What then? Would we be doomed to a life of apologizing about our homely biracial child? I could just see it — our poor kid shunned from the Hot Mixed-Kids Club because instead of being born a delectable caramel-hued Halle Berry, she or he was more like a cream of-mushroom-soup-colored Carrot Top.

It was beyond stressful.

Thank God my children hit the jackpot. They look like all those awesome looking mixed-race people kicking ass and taking names in the magazines and catalogs these days. Not to brag or anything, but my children stop traffic. We’ve almost caused accidents because a motorist couldn’t get on with his day without stealing a look. Hubs and I sometimes get embarrassed (he turns beet red, but Lord knows, I can’t!) with people throwing themselves at us just to tell us how beautiful our children are. Sometimes I fantasize about putting my kids on Ebay when they misbehave; I know I’d make a killing in a bidding war!

But, truth be told, despite the fact that we poop Oreos, we’re just like any other family. Sadly, the spotlight we live under doesn’t wash our dishes, get rid of our clutter, or stop our kids from wanting to beat the crap out of each other seventeen seconds after they’ve woken up.

But it doesn’t. The spotlight is just a glare we live under.

Sometimes it’s fine; most of the time we can handle it. Most people mean no harm. We’ve gotten used to it in the way that, eventually, people can get used to anything. Still, the spotlight is easily misdirected, and when it is, it sucks out loud. It can be anywhere from annoying, to rude, to hurtful, and we want it to go away.

So about that spotlight. . . if you’re aiming it in our direction, for the love of God, please turn it off.

Or at least point it towards us briefly, and with a friendly smile, before going on with your day.

ABOUT KEESHA: Before her two children re-choreographed her life, Keesha was a professional dancer who performed in the U.S. and in Europe. Today she teaches modern and jazz dance in the Chicago area. She is also the human cyclone behind the blog Mom’s New Stage. A multitasker at heart, she shows fierce skills at simultaneously writing, choreographing, checking Facebook and Pinterest updates, playing the role of a mother named Joan “Kumbaya” Crawford, and overcooking food. Keesha is one of the select contributing authors of In The Powder Room’s first anthology, You Have Lipstick on Your Teeth. Her writing has been featured on Mamapedia, The Huffington Post, and in the bestselling anthology I Just Want to Pee Alone.

This post was written by Keesha Beckford exclusively for BonBon Break Media, LLC