Happy Birthday to Me 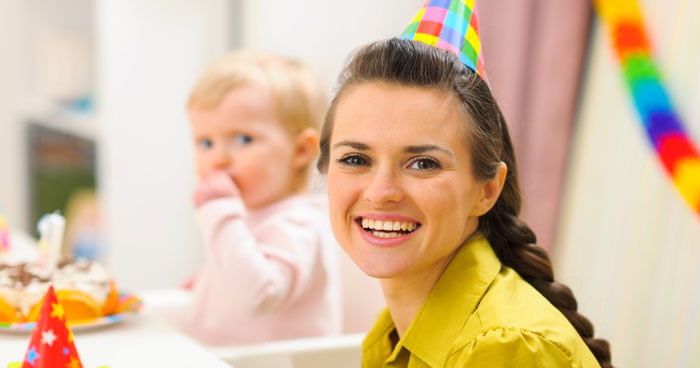 One week ago today my Little Man accomplished the first full year of his breathtaking little life. There were balloons and window festoons, cakes, candles and bubbly wines. The event was celebrated thoroughly. Mama even played “Happy B*Day” on her bass to accompany the choir of teary aunts and proud grandpas; everything was lovely and emotional like no other occasion I can think of.

But they say that when a Child is born so is a Mother, and, therefore, one week ago today the disheveled New Mom I have become marked the first full year of her breathtaking and somewhat erratic little life, too.

Since no one really celebrated this milestone, I will take a moment to do it myself, for I have grown. It hasn’t been easy. They say that the amount of change a human being goes through in the first year after birth and the speed at which these changes unfold is much greater than at any point later in their lives. For Mothers it’s pretty much the same, except Mothers don’t have to increase the size of their onesies every three weeks.

When I now sit on my armchair by the window with a cup of lemongrass-scented maté and allow my thoughts to go within, I feel like someone who has finally gotten out of the woods and onto a wide, mint-green clearing. I know there must be more woods ahead, and mountains, and traps of all kinds, but for the moment I would like to take a nice deep breath and look back at all the things I have learned.

I finally understand what the word “pain” means, and I am not so scared of it any more. After a completely unmedicated birth, two weeks of breastfeeding with nipples that were open wounds, stitches, resuming sex after stitches and the whole postpartum shebang, I am now much less of a princess in the ouch department. Sure, if someone were to put a stick between my teeth and saw my leg off in a military hospital in the middle of a jungle, I might still need a few shots of Tequila to endure it. At least I know the breathing technique now.

I weaned myself off sleep and several other bad habits. Like drinking coffee while hot, showering every day and peeing on my own. I don’t like the word “sacrifice.” It sounds a bit medieval and it makes me think of buckets of blood. I prefer “acceptance.” It’s much more Zen and it smells of early morning dew on the ferns by a small waterfall.

I shed 87% of the bullshit floating in my system. Foreplay? No thank you. I have no time for that. “Cut To The Chase” is my new battle cry. Is The Child (finally) down for his nap? Then I will RUN to that toilet and I will NOT relax and read a book as I do my business because before he wakes up I still want to RUN to the kitchen and swallow a sandwich without even looking at it while answering a pressing email with one hand and heating up the morning’s coffee with the other.  Because there is no way to know if a nap will last five minutes or two hours, you learn to live in the moment.

I reached a level of stamina and strength I never even dreamed of. When I think of myself as I was before my son entered my life, there is no denying it: I was a weakling. Mentally, emotionally and physically, I was like a tendril of smoke dancing mid-air over a decadent boudoir. I felt gracious, invincible and abstract but the truth is that so much as a window left ajar would have disintegrated me before I’d manage to say “blow.” Nowadays I feel more like a young female rhino although, I hope, I’m cuter than that.

I became closely acquainted with the notion of “relentlessness”. If you have ever found yourself at 3:30 am on a rocking chair trying to soothe a screaming, wiggling, desperately teething baby to sleep for no less than TWO hours, I think you know what I mean. You can’t press “Pause” on this scenario. You can’t just wipe off your hands after 57 minutes and say, “Sorry guys, this isn’t fun any more. I want out.”  Whatever escape you crave is irrelevant; you are a big girl and your child needs you.

Welcome to the real world and good luck.

Most importantly, I have learned what Unconditional Love is. After the post-delivery dust had settled, while my uterus began its shrinking process, my heart began to grow. It has doubled in size and beats with the strength of an army on the march. Whenever I hear people say a Mother would be capable of killing in defense of her offspring, I glance at my fingernails with a dreamy half-smile. You bet I would.

In my previous life as a childless maiden, I would often wander about the park in search of tranquil inspiration for my writing. I often ran into Mothers pushing prams to or from the playground, and I would avert my eyes. So uninteresting they were to me, in their plain clothes and unkempt hair.  Everything about them conjured up images of Hello Kitty and sippy cups. I thought these women led soft lives of bedtime stories, peanut butter and coloring books. I’m sorry, I was an idiot. Standing on the other side now, I feel steady and strong and fully proud of the woman I’ve become.

Writer by calling, Filmmaker by choice, Mama by surprise, Marta still dreams of becoming a Rock Star, one day. Till then, you can find her at nap time drinking yesterday’s coffee and blogging at Baby Blues & Rock'N'Roll about the breathtaking marvels of being someone she never thought she would ever be.
Next Article