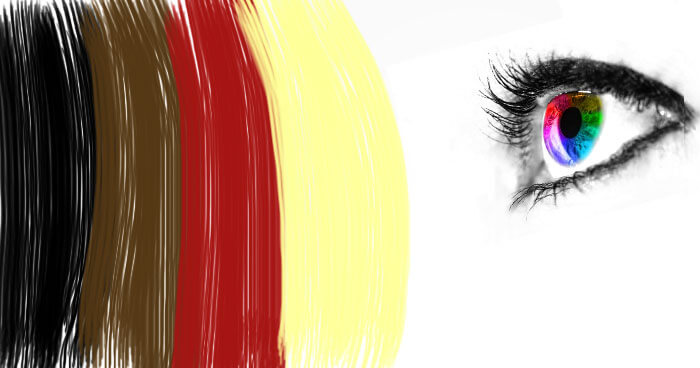 In the thick of the 1992 presidential election, I was a senior in college. I lived in a three-room suite with Lisa Chung and Tess Miller.*  We were African-American, Taiwanese, and WASP, and did almost everything together.  We were a walking Benetton ad.

Lisa and I were staunch Democrats, who would cast our first votes for Clinton/Gore.  Tess was an ardent Republican, as was her boyfriend, Isaac.  They were fond of bellowing, “Hello, this is the Clinton/Gore Rapid Response Team!” and bursting into hysterics. Tess’s boyfriend Isaac, a star debater, loved to give us shit for supporting Bill and Al.

One day we had had enough. Lisa spat, “We are voting for them because they at least try to understand what it is like to be a minority in this world.  You have no idea what it’s like for us!  You go on and vote Republican and think about why we wouldn’t in a million years.”

Tess sobbed in her room while we, feeling simultaneously emotionally cleansed and monstrous, stomped off to the Wawa, the campus version of 7-11.  We’d eat away our stress and anger about race, class, and senior year in the form of empty calories.

Lisa and I knew that Tess, a wealthy girl from the Chicago suburbs couldn’t be expected to know what it was like to be a middle-class person of color. Tess loved us for being us, and thought little about our minority status, so much so that she forgot about it. She meant well, or at least she meant no harm.

Sometimes white friends like Tess have been sweetly innocent. In the summer of 1993, I was a 20-year-old college graduate.  Which meant that when ID was required for the bars we were trolling in NYC, I was screwed. My fake ID wouldn’t have fooled a preschooler.  One night a friend, a beautiful olive-skinned woman, tipsily piped up with an idea.

I looked at her like she had three heads. Another friend blurted out, “Um, Kate? Keesha’s black.”

We had a good laugh over that.  How adorable!

In 2005, during an ultra-feminine bonding session, replete with wine, snacks, wicked memories, and belly laughs, another dear friend tearfully declared, “I don’t think of you as black.  You’re just my friend.”

Again, deer in the headlights.  This time there was no one else there to come to my rescue. Seriously? And yet, I knew what she meant.

She couldn’t believe that anyone would refuse to be my friend because of ignorant, racist ideas. Lamenting the horrible world that put so much baggage on our being friends, she sincerely meant no harm.

Twenty-three years later, in the wake of the virulent racism Barack Obama’s everything has unleashed; the murders of Trayvon Martin, Tamir Rice,  John Crawford, Eric Garner, Walter Scott, and countless others; and a media where racial issues seem to have replaced sex as a way to inflame people, I’m less likely to tolerate the colorblind friend.

Recently, in speaking about my piece Dear White Mom, I discussed the fear I have for my young son growing up in America.  A close friend informed me that all I had to do is make sure he stayed out of trouble and remained respectful to the police.

I launched into a diatribe about how that was not the case for so many men of color all over the country. My friend honestly didn’t understand.  To him, it was simple, because, colorblindness right?  The rules were applied equitably.  If only (Insert Black Man Shot here) had done the right thing, he’d still be alive.  I was enraged.

A few months later, we found ourselves discussing racism in the ballet world.  Our conversation got heated and ugly.  I mentioned Michaela dePrince, an outstanding dark-skinned ballet dancer who performed at the prestigious Youth America Grand Prix — a dancer offered not a single contract with any major company in the United States, save Dance Theater of Harlem.  I mentioned the fact that there are frighteningly few African-American ballet dancers in the major companies in the United States.  “If the ballet world, if any organization or institution truly values diversity, it must reach out to people of color.” My friend did not agree at all.

Our argument roiled on. “You really don’t think that Michaela dePrince’s lack of being offered a contract had nothing to do with race?” I asked. He couldn’t say that it did, wouldn’t even entertain the idea that at least in some cases it must have, which was all I wanted.

I was furious. “You really don’t get what it’s like to be black in America!” I snapped.

“You don’t know what it’s like to be white!”

That said it all.  Our evening was over.

We saw each other a week later. We revisited the matter in guarded tones. My friend admitted that racism existed but was leery of calling it out until he was absolutely sure.  I, on the other hand, could only be leery of a person who thought racism deserved the benefit of the doubt.  It scares me when colorblindness makes people equate a loss of an opportunity based on race to being short or having acne.  I can’t wholeheartedly trust someone who cannot fully support policies that would prevent little boys and little girls like me from achieving.

The panoramic lenses of race and class and color that filter American life have shaded our experiences in vastly different ways.  Sometimes it’s like we’re looking at separate worlds.  Some people see America as a generally level playing field.

Admittedly, I’m lucky to have friends with whom I can speak about race openly and honestly. But the conversations are still painful.

Sometimes colorblindness is exactly the way it should be. I’m friends with certain people because we share a love of Seinfeld, SNL, slightly offbeat fashion, early 90s hip-hop, non-stop sarcasm, Jon Stewart, and have each others’ backs always. But colorblindness can never mean walking through America’s jagged racial landscape with a thick blindfold and earplugs and meaning well.  Although I’ve been called an Oreo more times than I care to admit — a problem in itself– nothing could be further from the truth.

This skin means something.

*All names have been changed.

This post was written by Keesha Beckford exclusively for BonBon Break Media, LLC

Before her two children re-choreographed her life, Keesha was a professional dancer who performed in the U.S. and in Europe. Today she teaches modern and jazz dance in the Chicago area. She is also the human cyclone behind the blog Mom’s New Stage. A multitasker at heart, she shows fierce skills at simultaneously writing, choreographing, checking Facebook and Pinterest updates, playing the role of a mother named Joan “Kumbaya” Crawford, and overcooking food. Keesha is one of the select contributing authors of In The Powder Room’s first anthology, You Have Lipstick on Your Teeth. Her writing has been featured on Mamapedia, The Huffington Post, in the New York Times bestselling anthology I Just Want to Pee Alone, and in the third book in the Pee Alone series, I STILL Just Want to Pee Alone.
Next Article