20 Things an Only Child Will Learn About Siblings 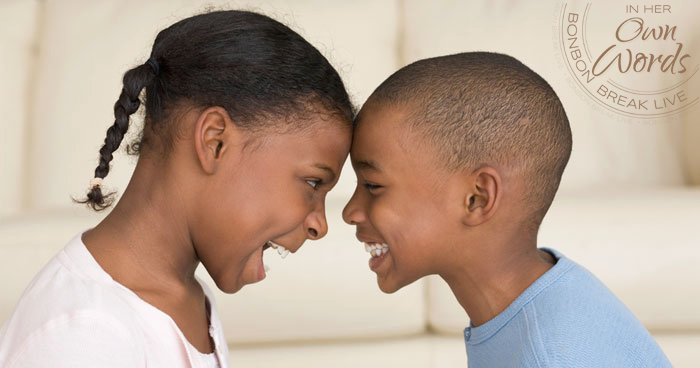 As the only child of a single mother, I longed for a brother or sister. A playmate. A confidant. A partner in crime. I thought having a sibling was like having your best friend living in your house. I’m not sure why. One of my best friends at the time had a younger sister, and those two girls fought like tomcats in a sack. Somehow I thought they were the exception, not the rule.

Now that I have two kids, a son and a daughter respectively, born 18 months apart, I see that my former bestie and her little sis were normal, and I was clueless. Being a daily witness to shenanigans ranging from silly to bloodthirsty has taught me a thing or 20 about sibling dynamics. Here goes:

3. Even with a sibling and a crap ton of toys in the house, your kids still think you’re supposed play with them!

Listen to Keesha read this on STITCHER – LIBSYN – iTunes

5. Actually, you do favor one kid, but which kid it is changes. It just depends which kid isn’t driving-you-batshit-crazy at the moment.

6. Never making a child feel slighted means siblings are more spoiled than only children could ever hope to be.

7. Siblings treat each other like trash and other kids like gold. Except when they don’t know anyone else.

8. The best sibling bonding seems to come when they’re treating you like a substitute teacher with a bad wig.

10. Never underestimate the skills of a kid who wants to throw her brother under the bus. She’ll play you like a saloon piano.

11. An only child has no friggin’ clue what a noisy house is.

12. Having siblings not only fails to make a kid good at sharing, but actively trains him to be more of a badass at making sure no one plays with his stuff. EVER.

14. When they want to keep something from you they make the “blue wall of silence” look like a gossip circle.

15. Fair is, in every sense, a four letter word and and the other f-bomb.

16. The child screaming “Go away!” and “Leave me alone!” will be all up in his sib’s grill two minutes later.

17. The brother or sister your children want the most belongs to another family.

18. They understand the rules perfectly — when their sibling isn’t following them.

19. They’re perfectly independent and have nothing to say, until your other child has your attention.

20.That in those rare moments when your kids are getting along, you’ll swear you see a rainbow arcing over them.

How has your family changed your perspective on family size, composition, or birth order?

Before her two children re-choreographed her life, Keesha was a professional dancer who performed in the U.S. and in Europe. Today she teaches modern and jazz dance in the Chicago area. She is also the human cyclone behind the blog Mom’s New Stage. A multitasker at heart, she shows fierce skills at simultaneously writing, choreographing, checking Facebook and Pinterest updates, playing the role of a mother named Joan “Kumbaya” Crawford, and overcooking food. Keesha is one of the select contributing authors of In The Powder Room’s first anthology, You Have Lipstick on Your Teeth. Her writing has been featured on Mamapedia, The Huffington Post, and in the bestselling anthology I Just Want to Pee Alone.
Next Article