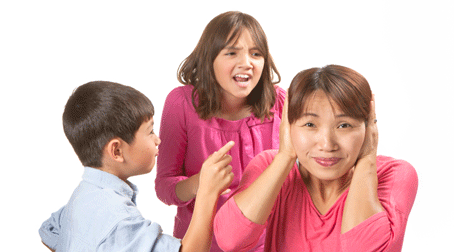 by Ellie of Musing Momma

I’m pretty sure that my 7-year-old snuck off at some point in the night and took classes at Harvard Law. How else can I explain his ability to argue any point ad naseum, putting the most seasoned attorney to shame? It’s admirable, really. He is persistent and amazingly convincing. But, as his mom, I also find it really, really frustrating, particularly when the arguing results in a heated negotiation about something I’ve asked him to do or not to do. I am also certain I’m not the first parent to experience this. I was a pretty argumentative kid myself, so I can count my own parents in the “been there” club. Maybe you are a member too?

On one hand I want to support Zippy’s assertiveness, and I want him to know that what he has to say matters. I know that he is at the age where feeling knowledgeable is important and, as a very goal-directed kid, getting to do what he wants to do is important to him.

On the other hand, there are times that the answer is “because I said so” (even though I swore that would never be the case). As a parent, I’m juggling so many different things that sometimes I just need him to go with the flow so I can keep all of the balls in the air. I also want him to respect my role as the parent in our relationship. The more that I engage with him in debate, the less weight my words seem to hold and the more everything seems to become debatable. And, beyond our relationship as parent and child, I want my boys to learn that there is a time and place to disagree or stand one’s ground – both with adults and with peers. It is an important skill to have when it comes to building healthy relationships or being a strong leader.

So where is the middle ground? How do I give Zip the space to share his point of view, without getting drawn into a heated debate over whether he is allowed to catch snapping turtles with his bare hands or whether he brushed his teeth before getting in bed? (Definite NO on the snapping turtles and, sweetie, your toothbrush is still bone dry.)

I was really struggling with this during our end-of-summer trip to Vermont. I was flying solo the last few days and I had reached my breaking point. As usually happens, frustration and guilt about with how I was handling interactions with my boys prompted me to sit down and come up with a plan. The plan is very simple. It is just a structure that allows the kids to share their thoughts but doesn’t enable an argument. It goes something like this:

So often when a disagreement began I would find myself immediately feeling frustrated  (Here we go again!). I would be so intent on standing my ground that I didn’t really listen. My responses became arbitrary and I knew it. Sometimes I gave in (Okay, he makes a good point) and sometimes I stood my ground even though he made a good point (He needs to respect that I’m the adult). And if he didn’t feel heard, that only increased his frustration and fueled his efforts to change my mind.

Our new strategy slows me down and that, in itself, makes a difference. When Zip explains his point of view, I try to let him talk for as long as he needs, and sometimes I ask, “Is there anything you would like to add?” before we move on to the next step, just to be sure he has said everything he needs to say. The beauty of it is that when kids feel heard and know that their thoughts have at least been taken into consideration, they are more likely to accept the outcome, even if it isn’t in their favor.

I don’t expect to stop the arguing completely. That wouldn’t be realistic or even fair. Kids need to be able to speak up and share their opinions.  We’re all human and get a little heated sometimes. My goal is to keep our frustration and the arguments to a minimum, and to teach Zip how to disagree in a respectful way. Not only does our new strategy divert an argument, but Zip is gaining valuable practice in how to disagree respectfully and “make his case” in a positive way.

It is still a work in progress. I explained the plan to Zip before we started using it and while he sometimes remembers on his own, I often find myself needing to remind him (and myself), “Whoa! This sounds like arguing! What did we forget to do?” “Oh yeah. Can I make a point, Momma?” But the more we practice, the more routine it becomes. And when we do use this strategy, we’re both happier. I’d call that success.

ABOUT ELLIE: Ellie is the Editor of the Family Room at BonBon Break and blogs at Musing Momma, where she shares inspiration for happy parenting and reflects on life as momma in a mixed race family.  Ellie has a Ph.D. in psychology and counseled children and families for several years before changing paths to spend more time with her family. She resides in central Pennsylvania with her husband, their two adorably mischievous boys (ages 4 and 7), and their sweet, arthritic dog (age 84, in dog years).

CONTINUE READING IN THE FAMILY ROOM or READ…