Roasted Turkey Drumsticks and Carrots by The Midnight Baker 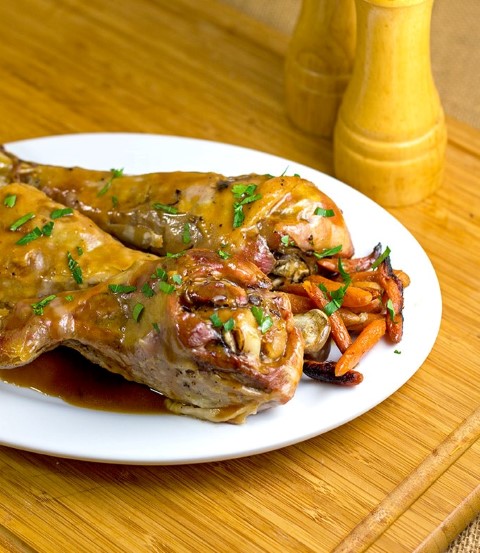 Never cared for food cooked in a slow cooker—meaning the standard fare of toss it in, come back 8 hours later and here’s dinner.  I guess that was because I was never a fan of stews or foods that had that “cooked-all-day” taste.

But I have recently discovered the absolute miracle of these appliances!  I had three of them hanging around here gathering dust and cobwebs, hardly used except for the few times a year I make pot roast.  Don’t ask me why I had three–different shapes and sizes–when I rarely used the thing.  Little did I know that my slow cookers—yes, all THREE—would not get a chance to cool off this past winter.

So, what happened to change my mind?  Something quite innocent actually.  Facebook friend and fellow blogger Tara Noland, remarked in a status update that the family wanted barbeque but she was not about to trudge out to the grill in sub-zero Canadian winter temperatures.  Instead, she did this in her slow cooker.  I was intrigued.

Along with those three rarely-used slow cookers, I had about two or three cookbooks I’d bought on the subject of slow cooking.  I bought those books because I was frankly curious to find out why everyone, including my sister, was absolutely crazy about theirs.  One book was pretty much standard recipes, but the other two concentrated on the fact that you can cook gourmet meals in your slow cooker with a few little steps added.

One added step was browning the meat first before slow cooking.  I have discovered that this tiny thing actually is the biggest key to good-tasting slow cooked food.  The second step is deglazing the pan you browned the meat in and using that liquid instead of or for part of any added liquid needed to cook.  Try this with your next pot roast.  Guaranteed the flavor will be kicked up considerably.

Since practicing what I read produced such wonderful results, I made it my pet project to test if I could use this for meals besides your standard stews and other dishes requiring moist cooking methods.  I decided to see if I could actually roast in it.

I’d just picked up chicken drumsticks pretty cheap and used them for the roasting test.  I reasoned that low wouldn’t be the right temperature to use, so I chose high.  Just like oven roasting, I added no water.  Figured the worst that could happen was the slow cooker broke which really wouldn’t be a tragedy—remember, I have THREE!  I just rubbed on a simple seasoning of salt, pepper and garlic powder.

I set it to high and went to take care of other business.  I came back about 4 hours later and looked inside.  To my surprise, I had nicely cooked and browned chicken drumsticks—with no water really at the bottom of the ceramic crock.  The taste was pure heaven.  Reminded me of those rotisserie chickens the supermarket sells.  Carrying this roasting experiment further, I upped the ante a bit and tried it with turkey drumsticks and baby carrots.  This time, after about 4 hours, I had about a cup of pan juices in the bottom of the crock.  So what I did was pour those out and reserve for gravy, then wiped the crock dry with a paper towel.  I placed the turkey and carrots back in the now-dry cooker and cooked on high for another hour.  They were delightfully browned and the carrots actually caramelized in parts and tasted like good old roasted carrots you get from your oven. Recipe is below.

Place drumsticks in slow cooker.  Add carrots to pot, trying to place them around the turkey.  Set cooker to HIGH and cook for 4 hours.

Remove drumsticks and carrots.  Pour off and reserve any accumulated meat juices.

Wipe crock dry and replace turkey and carrots in crock.  Cover and cook on HIGH an additional 1 ½ to 2 hours.  Remove to platter and cover with foil to keep warm.

Add enough liquid to reserved meat juices to make 1 cup of liquid.  Transfer to a small saucepan, heat and thicken to make a gravy.  To thicken, use either 1 tbs cornstarch mixed with 2 tbs water or 1-2 tbs instant flour (i.e. Wondra).  If using Wondra, just shake it into hot juices while whisking constantly.  If using cornstarch/water, add slowly whilst stirring constantly.  Gravy is ready to serve when it begins to boil.

Since then I’ve tried all sorts of things.  I’ve made a lovely apple pudding and even baked a banana bread.  And tipping my hat to Tara, who opened up a whole new world for me, it this recipe for barbequed chicken.

Of course, I’ll still use it for pot roast and the occasional soup, but my advice is keep experimenting to see just what you can do with your slow cooker.  If anything comes out less-than-perfect from these scientific adventures, there’s always the dog—and they’ll love it, believe me!

ABOUT JUDITH: Hello to all!! My name is Judy. I’m a widow and a retired mechanical engineer, live near Woodstock, NY (yes THAT Woodstock! But born and raised in Brooklyn, NY USA). I love to cook, entertain and share my recipes and tips. Make sure you come over to my site The Midnight Baker and have a good look around.