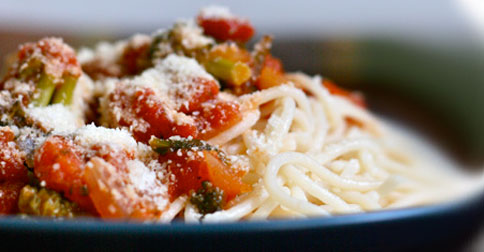 When we brainstorm a Daniel Tiger’s Neighborhood episode we have amazing conversations about what we hope our shows will inspire.  And now, Val has confirmed what we hoped to be true – we have inspired some healthy eating with our “Try a new food it might taste goood” episode!  Here’s a bit of insight from Becky Friedman,  my wonderful Story Editor, and the writer of this episode.

Back when I was working “in the trenches” as a preschool teacher, I saw day after day that parents and caregivers were struggling with getting kids exited about healthier food options.   With big corporations spending tons of dollars on making junk food appealing to kids – where were the cheerleaders for fruits and veggies and whole grains?  Now, as children’s television writer, I saw an opportunity to model trying new and healthy foods in a fun and appealing way.  After all, if Daniel Tiger could try a new food…maybe the kids at home would too?  Equally important was showing the ‘darker’ side of trying new foods…that you might not like them! (shhhh…don’t tell!) Miss Elaina modeled giving it the “old college try”…and then politely declining if it wasn’t your favorite.  Hopefully kids everywhere will become fans of veggie spaghetti!

~ Becky Freidman, writer of “Try a New Food It Might Taste Goood” episode

After watching the “Veggie Spaghetti” episode for the umpteenth time, my 5 year old asked, “When are WE going to have Veggie Spaghetti?!?” We have made various combinations of this recipe over the years, but this one is special since my son and I sat down together to write it, prep for it, create it, serve it and eat it!

A few notes, we use Muir Glen organic tomatoes. Most canned tomatoes have a BPA-lining which is drawn into the tomatoes due to their acidity. Muir Glen is BPA-free. Eden Hills (amber glass jars) and Pomi (BPA-free tetra pak) also offer BPA-free tomato options.

The rest of our produce is organic as well. While we don’t shop organic exclusively, we do use EWG’s Dirty Dozen list as a guide and we buy organic meats and dairy.

Add to this that I recently found out that I have a high sensitivity to gluten and we have a gluten-free and veggie recipe on our hands.

People often ask me why I have such good eaters. I think it’s simple. They eat what we eat and they are aware and involved in the entire process.

To get your kids involved, have them:
–  Shop, harvest or gather the ingredients from the refrigerator
–  Prep all of the ingredients before cooking (including measuring everything)
–  Use kid-friendly kitchen gadgets from brands like OXO which utilize Universal Design
–  Learn how to use a knife and other kitchen tools safely
– Learn about the “hot zones” in a kitchen that they need to be aware of
– Cook WITH you!

The game changer for improving your child’s eating habits is involving them in the process from beginning to end.

Salt and  pepper to taste