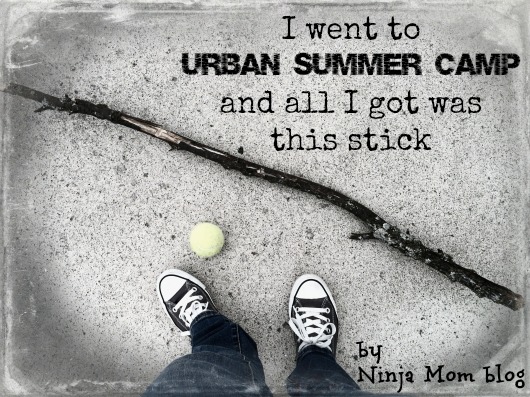 In my youth, I attended many, many enriching camps. None of them sleep-away, and none that did not feature, almost exclusively, pony bead lanyards and frames made from pop sticks. That’s not to say that I went to urban day camps designed to entertain the relatively poor kids who had to stay with their fathers over summer break because of binding custody agreements, but yes, I’m saying that.

I don’t regret my summers spent playing stick ball with children I’d likely never see again when they returned to their mother’s houses for school in the fall. I enjoyed my clay ashtray making and the deep discussions with other little girls about our Lisa Frank sticker collections. At lunchtime, noshing at a splintered picnic behind the municipal building near a barrel of trash where the bees gathered for their version of summer camp—I didn’t hate my lukewarm bologna sandwich, my cavity rich Little Hug* juice drink, and my pack of Now and Laters candy.  I relish the freedom I had then riding to camp alone after my father had left for work, careening down busy streets on my BMX bike, not looking both ways before coasting into the road because I was wearing the invisible armor of youth: idiocy. I was happy on my way to Lodi, NJ’s finest summer enrichment program—sunburn gratis.

But I wouldn’t send my kids there.

Like any parent who grew up working poorish and as an adult has multiple credit cards that aren’t completely maxed out, I want to give my children all of the things I never had. Important things like a two-parent home, fresh fruit and veggies, American Girl dolls, and a kick ass summer camp. I’m talking big “S,” big “C” Summer Camp, the sleep away kind.

Now, just because I’ve never been to sleep away camp doesn’t mean I can’t fantasize about its particular perfection. S’mores and ghost stories around the campfire will surely abound. There certainly will be nature hikes and bikes with baskets on the front for toting around camp store purchase like knot-tying kits and stationery for penning letter home. “Dear Mom, Does your love know no bounds? Camp is changing my life in the best possible ways and I thank you, Mother, for your kindness. . .” She will make a friend for life in the little girl with the gender neutral name, maybe Riley or Emerson, who will bunk with her. She’ll develop a harmless crush on the cute counselor who teaches swim safety. Perhaps she’ll have a minor run-in with poison ivy that will teach her a gentle lesson about horticultural awareness, leading her to someday explore the Amazon for life-saving compounds she then turns into the cures for cancer and erectile dysfunction.

The magic of sleep away camp and all of its enumerated and implied benefits is strong ju-ju, cher. Perhaps attending camp will be the kind of foundational experience that will lead one of my own children to become a leader in any of our most important industries, like the All Star Products Group, responsible for the single most influential product of our age, the Snuggie.

Who can put a price on dreams?

Cheley Colorado Camps can, and that price is $4850 for half of the summer. But hey, they have horses.

You’ll pay about the same for Camp Mesorah, a co-ed Orthodox Jewish camp. But, oy vey, they have rock climbing walls.

I know what you’re thinking, “Why would I spend that much on summer camp when I can leave the kids with Grandma for a week and go to Vegas instead?” And if you aren’t thinking that, well, I am. Thank Elvis impersonators there are week-long alternatives.

Thrill Coaster Tours is about the same at $1500, if you book before February. Otherwise it will run you about $2000 for junior to exorcise his corn dog after riding the Vominator at one of the many parks he’ll visit in Pennsylvania or Florida, all premier destinations for child predators.

Ah, summer camp. How I’ve romanticized thee. And while these camps do look AH-mazing, I’ll probably invest my money in some new and improved Little Hugs* and swim lessons at the Y because mommy’s spa day will not pay for itself.

*My exhaustive research (five minutes) of the American Beverage Company’s Little Hugs has unearthed updates to the juice line. Now it has a straw and 75% less sugar. It even has vitamins. I’m glad to see they still come in nearly neon, never before seen in nature colors. Kudos to you for only selling out most of the way, ABC.

ABOUT NICOLE: Nicole Leigh Shaw consistently wonders, “Why did I come into this room?” Once upon a time she was a mostly serious news journalist, an accidental magazine columnist, and a mediocre editor. Now she funnels an enthusiasm for meeting minimum requirements into her blog, Ninja Mom, and finding pairs of socks for her kids that kind of match. With four kids under age eight (two are twins), she can say with confidence that she’s finally gotten the hang of this birth control thing: Facebook. Because one cannot procreate and update statuses at the same time. Like her Facebook page and follow her on her back-up birth control, Twitter.

Check our her blog at http://www.ninjamomblog Pin her on Pinterest or send her an email.

Fill Your Well by Awesomely Awake