How to Unclog Your Kitchen Sink! by One Good Thing by Jillee 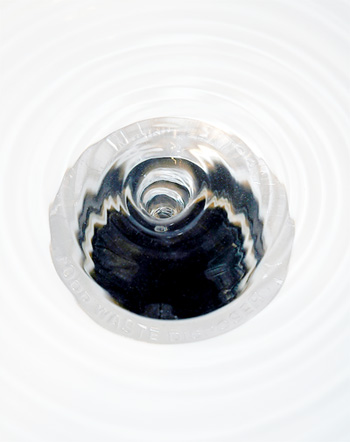 After having had several unpleasant experiences with backed up pipes, I am usually SOOOO careful what I put down it. No rice, no eggshells, no vegetable peels, basically NOTHING that isn’t liquid(ish).

Well, today I LOST MY HEAD and put the cut off ends of two bunches of cilantro down the sink and turned on the garbage disposal. After all….isn’t that what garbage disposals are designed to do??? I know, I know, I’d been burned before….I SHOULD have known better….but “knowing better” is not one of my strong points.

Sure enough….the garbage disposal was running but no water was going down. It just sat there, a mocking, spinning, vortex of water!

At this point I was grateful that the hubster happened to be out of the house at the time. I could already hear the lecture that was in my future in my head! So in a desperate attempt to avoid said lecture, I decided to try a “trick” I had read about involving vinegar, baking soda and a “mini volcano”…

ABOUT JILL: Jill Nystul is the creative force behind One Good Thing By Jillee. She started the website in June of 2011 and has enjoyed a meteoric rise in readership since that time. She attributes this success to savvy readers that desire to enrich their lives while recognizing the need to conserve time, money and resources. Her background in broadcast journalism and television talk show production have proved to be the perfect compliment for her blogging career and website mantra: “Sorting through the beautiful clutter of life to find that One Good Thing each day and sharing it with you.”