My French Garden: Before and After 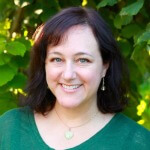 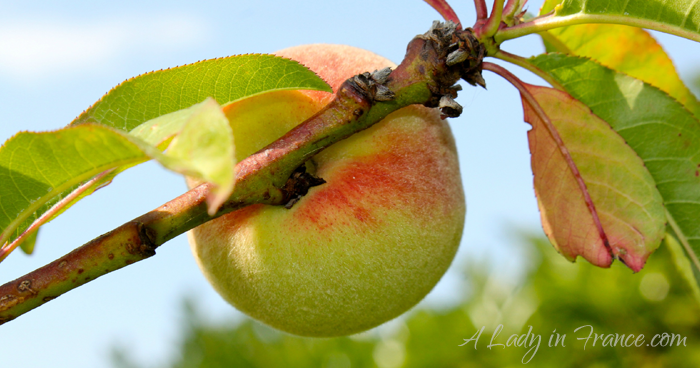 We inherited our house and garden from a retired couple who wanted to move to Brittany. Everything about the place was tidy and industrial, including the sectioned-off “potager” (vegetable garden) in the back.

I tried to keep it up. I did. We dug rows and planted vegetables faithfully for a couple of years afterwards, but were never able to win the war over the weeds. So we delimited the vegetable/fruit areas and grew grass everywhere else.

The triangular piece of land that served as a potager bordered the property, and was only acquired a few decades after the house was built. The previous couple left the chain-link fence and the rigidly cut hedge, and extended the cement path.

We wanted the chain-link fence gone and the hedges with it. We replaced the gate with a wooden arch and grew kiwi over it. On the right are apple trees, strawberry plants, and there is jasmine weaving through the lattice.

When we bought our house, we really bought into the neighborhood because the house itself was 55 square meters for all five of us. That’s right folks. 592 Square feet for a family of five! And we lived in major construction for a year while we transformed the basement into bedrooms, and broke the walls upstairs to create an open living room. That meant our tidy yard looked like this:

And, not only did we lose that coniferous tree (no loss, really), but we needed to completely re-sow the grass as well. With the hedges gone, we decided to plant lavender bushes along the cement wall, interspersed with tulips, irises and calla lilies.

My husband created that fence by driving large posts into the earth at regular intervals and weaving the freshly-cut branches from our linden tree, which we need to trim every year to keep from getting too big. Not only is the fence pretty, but we can attach the raspberry bushes to the other side.

Like many French people, the retired couple delimited set areas for nature (trees and flowers), and kept the rest of the walkways tidy with cement paths.

I don’t like marigolds, and thought the yellow clashed with the purple/pink of the flowering plum tree. I also don’t like to work too hard, and so (with the help of my Master Gardener mother, who was visiting), I planted perennials in matching colors – hyacinths, narcissus, coral bells – and put bark around them to prevent weeds from growing.

The yard closer to the house was functional too. That’s where the cement clothesline was; the grassy area was used for more vegetable plants, and there was a cement well filled with spiders where potatoes were kept until they were ready to be eaten. (Shown on the ground close to the hedge).

We wanted grass everywhere so the kids could play, and had no intention of storing potatoes outdoors. So we planted black bamboo in the cement well. The hole was completely enclosed, so there was no danger of the bamboo becoming invasive. We planted roses next to the bamboo, and bleeding hearts next to that.

We also dug up the cement path and replaced it with round lava stones that we brought back from Auvergne.

What else can I say about our garden? The French love fruit trees. Our entire property (including the foundation of our house) is 650 sq metres (7000 sq feet). It’s not really all that big. And yet, we have two apricot trees (but only one bears fruit), a plum tree, a hazelnut tree and two apple trees. We added a cherry tree, raspberry bushes and strawberry plants, and set grape vines growing up the wooden swing set.

We also planted a peach tree to remember the baby I miscarried at 15 weeks. His name was Alistair.

There are some things that were too beautiful to touch when we moved in, like the climbing roses that grow over the well and bloom in May.

And then there are the things we can’t seem to change no matter how much we want to.

Those constants of tending a garden when you’re in France.

This post was written by Jennie Goutet exclusively for BonBon Break Media, LLC.

Jennie Goutet is the author of award-winning memoir A Lady in France, and blogs under the same name (http://aladyinfrance.com). She also wrote and illustrated the children’s book Happy People Everywhere, is a contributing author to Sunshine After the Storm, and That's Paris - an Anthology of Love, Life and Sarcasm in Paris. She was a BlogHer Voice of the Year pick three times, and her writing has appeared on Huffington Post, Queen Latifah’s website, Mamalode, BonBonBreak and BlogHer. She lives just outside of Paris with her husband and three children.
Next Article