BBL: From Blog to Book 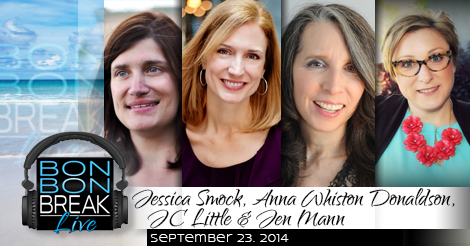 In this episode, Val is chatting it up with Jessica Smock, Anna Whiston-Donaldson, JC Little and Jen Mann about the journey from blog to book. Each of these women have authored and / or edited their own books and they will be sharing their publishing secrets with you LIVE on September 23, 2014 10AM PST.

Jessica Smock – Jessica Smock is a co-editor of The HerStories Project and an assistant editor at Literary Mama. The HerStories Project’s second anthology on female friendships, My Other Ex: Women’s True Stories of Losing and Leaving Friends, was published on September 15, 2014. She lives in Buffalo, New York with her husband and toddler son and blogs about writing, publishing, parenting, and motherhood at School of Smock and at The HerStories Project. Jessica  received her doctorate in educational policy from Boston University in 2013, where she was also a teaching and research fellow.

Not all friendships are meant to last forever. There can be so much good, so much power, so much love in female friendships. But there is also a dark side of pain and loss. And surrounding that dark side there is often silence. There is shame, the haunting feeling that the loss of a friendship is a reflection of our own worth and capacity to be loved.

My Other Ex: Women’s True Stories of Losing and Leaving Friends is a step toward breaking that silence. The brave writers in this engrossing, diverse collection of 35 essays tell their own unique stories of failed friendships and remind us of the universality of loss. The book, edited by Jessica Smock and Stephanie Sprenger of The HerStories Project, includes a foreword by Nicole Knepper, author of the popular blog and book, Moms Who Drink and Swear.

The HerStories Project is accepting submissions for its next collection of essays, Mothering Through the Darkness: Stories of Postpartum Struggle.

Anna Whiston-Donaldson – Anna is a popular blogger at An Inch of Gray. A graduate of James Madison University and Wake Forest University, she taught high school English for six years before becoming a full-time mom and writer. She lives with her husband, Tim, and daughter, Margaret, in suburban Washington, DC.

A former high school English teacher and bookstore manager, Anna began writing the blog An Inch of Gray in 2008 to share funny stories of life and motherhood and to find online community. After the sudden death of her 12 year old son Jack in 2011, Anna chronicled her grief journey in real time for her readers in order to reveal what grief is really like and to find healing for herself.

Her memoir Rare Bird: A Memoir of Loss and Love was published by Convergent Books, a division of Penguin-Random House.

Visit her blog, An Inch of Gray or her writing site, AnnaWhistonDonaldson.com

JC Little – JC Little is an award-winning story artist and animation director. Her 30-year career spans commercials, feature films, new media, and her own TV series, My Life Me. Blogging as “The Animated Woman”, her playful style, wit and ability to illustrate tender moments have earned her two BlogHer VOTYs and three Canadian Weblog Awards. She’s written and illustrated two little books; The LAST Snowman and Motherhood. JC lives in a messy house in Montreal, with her lovely British husband and three fantastically opinionated children.

Visit her blog, The Animated Woman or her YouTube Channel by the same name.

This is the universal story of motherhood, from the gentle moment of birth to the inevitable letting go. In the playful and poignant simplicity that is her signature style, JC Little has captured the tender bond between mother and child.

Motherhood is a timeless picture-book for mothers, sons and daughters of all ages.

“This afternoon it snowed. It was probably one of the last snows of the winter, so it was lovely sticky snow…perfect for making a snowman.” So begins the funny and poignant tale of a teenage girl and a dangerously tall snowman. The LAST Snowman is a book with timeless appeal for children and adults alike. Award-winning story artist JC Little has playfully captured a tender “moment” in family life, marking the ephemeral grace between childhood and adolescence.

Jen Mann – Jen is best known for her wildly popular and hysterical blog , People I Want to Punch in the Throat. She has been described by many as Erma Bombeck – with f-bombs. Jen is known for her hilarious rants and funny observations on everything from parenting to gift giving to celebrity behavior to politics to Elves on Shelves.

In December 2011 Jen had 70 followers on her blog and she wrote a post lamenting the overachieving moms and their Elves on their Shelves. It struck a chord and went viral. This one post catapulted her blog into a whole new realm overnight. Her Elf on the Shelf post has been viewed over 3 million times and she has over 195,000 fans on her PIWTPITT Facebook page. She has another page for her best selling book I Just Want to Pee Alone with over 270,000 fans.

Nothing is sacred and Jen does not pull punches.  She just says what everyone else was thinking. Her debut self-published non-fiction book, Spending the Holidays with People I Want to Punch in the Throat was released October 2, 2012. It reached number one on Amazon. This book has now been optioned by Random House and will be re-released with new material in December 2015. Her second self-published book is an anthology collection that she edited and contributed to, I Just Want to Pee Alone. This book also reached number one on Amazon and is a best-seller. Jen also released volume two: I Just Want to Be Alone, on March 22, 2014.

Jen is a married mother of two children whom she calls Gomer and Adolpha on her blog – she swears their real names are actually worse.

LISTEN TO THE PODCAST:

Leave your questions for these women in the comments below or email them to Val at val@bonbonbreak.com before the show!