Are “Genius” Toys a Smart Purchase for Babies? 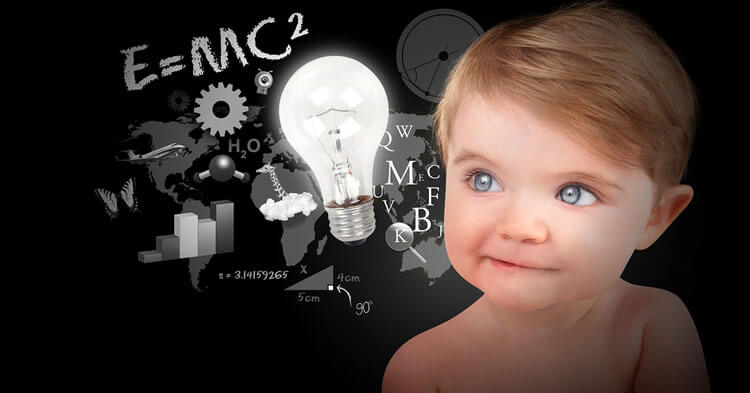 Shopping for baby toys can be utterly overwhelming, as I learned recently when I took my first real trip to the local toy store to shop for my son’s first big holiday, and then a short week later, his first birthday. The toys that lined most of the aisles flashed bright lights, played music, and even talked to you as you walked by. Many of them boasted their utility in teaching babies language, musical skill, and even math, carrying the names of famous savants like Einstein and Mozart. It’s enough to make your head spin — or possibly even cause a seizure — between the constant sounds and flashing lights.

With all the options out there and pressure to buy toys that are “educational,” how do we choose for our babies? And are “genius” toys really a smart purchase?

“Genius” toys first entered the scene in the early 1990’s after a group of researchers published a study showing that college students who listened to Mozart before taking an IQ test performed better on specific portions of the test. After this work was published in Nature (one of the most prestigious academic journals in the world), an explosion of media attention birthed the legend of the Mozart Effect. Even though the original study was on college students, the idea that playing classical music increases a baby’s IQ became quite popular as well—so popular in fact that several states, including Georgia and Tennessee, started government-sponsored programs that provide all new mothers with a Mozart CD. Products with names like Baby Mozart and Baby Einstein soon started populating the shelves of our local toy stores.

Maybe listening to Mozart helped college students perform better on an IQ test, but is there any evidence that these “genius” toys actually help babies learn? Research suggests that it doesn’t. In one study examining the efficacy of a popular “genius” DVD designed to teach infants new words, researchers not only reported no gains in vocabulary from watching the DVD, but they also reported that the best improvement in vocabulary was found when parents just taught their infants the new words themselves.

Similar results have been found for high-tech electronic toys. For example, a new study looking at how parents talk to their babies (ranging from 10- to 16-month-olds) while playing with different kinds of toys reported that the amount of language parents use and the quality of their language is generally lower when parents and babies play with electronic toys than when they play with the traditional toys or books.

Why are parents and the language they use so important here? A really famous study found that children whose parents talked to them more (using more words on average) had a distinct advantage in school over children of parents who spent less time speaking aloud. “Genius” toys and electronic toys seem to keep parents from doing just that; since they do all the talking themselves, parents don’t have to, which isn’t the best thing for learning.

This doesn’t necessarily mean that electronic toys and “genius” toys are bad; it just means that talking and playing with parents is always better for learning. The same can be said for watching television—screens themselves aren’t necessarily bad for kids, but when children are on screens, it generally means that they aren’t playing actively, and they aren’t talking to their parents.

So in terms of learning, there is no evidence that these products will do anything to boost your baby’s IQ, and it is important to have a realistic idea of what they can and can’t offer your child when you purchase them.

However, if your goal is to entertain, these toys might be useful. My son absolutely loves musical toys with flashing lights; he has a variety of them that he places in a circle and loves to bounce around as he activates each of their songs one by one. These toys probably won’t turn him into a genius, but they sure are helping him with his dancing skills.

READ MORE IN THE PLAY ROOM

5 Alternative Toys for When You Are Desperate