YOUR PASSIONATE SELF by Brenda Moguez 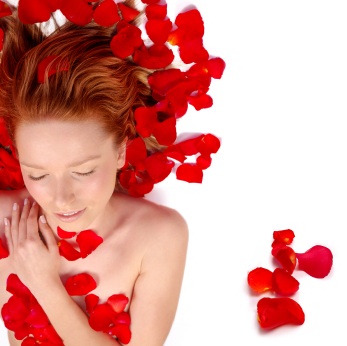 About ten years ago, I woke up feeling as if I had lost my shimmer. I was on the wrong side of the scale and looking less like me, and more like the Pillsbury Dough Boy, which the gynecologist pointed out at my annual exam. She wasn’t saying anything I didn’t know but her words shattered what was left of my esteem and cracked me open. I left my feelings on the floor of the exam room, hauled my battered ego out into the sunshine hoping for a respite from the nothingness growing unchecked within me.

I sat inside my car unfolding the pieces of my life I had buried behind the wall of me. Women have a tendency of barricading themselves from life. The wall goes up after the first heartbreak as a first line of defense from future miscreants. Its purpose is to prevent heartbreaks, ego bashing, and dream squashing. Mine was no different. I had done a fine job of shielding myself from anything remotely sensitive, but I inadvertently buried my reckless abandonment behind the wall. My passion was withering inside of me and I hadn’t a clue.

I had too much pride to unload my personal sense of loss on anyone, besides who talks about size too big—double digit jeans, lost sparkle, displaced personal passion, and the woman we once were back before “I do”, baby one or more, and un-domestic bliss.

We unload the inconsequential tidbits of our life with friends, but a woman would rather be struck dead before confessing she’s lost her way. Pieces of the story surface after a couple glasses of wine, but a woman is hard pressed to confess she doesn’t have purpose or a clue how to find her way back to whom she once was. Harder to confess and later accept, that the fire in her belly once smoldering, has gone ashen.

I wish I could say after I cried my last tear I saw the light and my passion recharged, but I can’t. I had commitments and no time to dwell on my loss. I pasted another layer around myself thinking this would fix me, but it didn’t. It would take me another month before the wall of me cracked. I tried plastering the hole but everyday there was a new crack until the wall of me was a mosaic. Something was forcing me to look at myself from the inside, which I hadn’t done in a long while for a good reason.

I was afraid once the wall came down there be nothing inside of me. What if all I was meant to be is what I had become. It’s chilling, when awareness settles over your bare shoulders. I had meant to protect my heart from others but I ended up hurting myself by hiding behind the wall of me.

Women, regardless of the variables—size, color, bank balance, ethnicity, address—assume or forget passion is essential for a full sense of self. We’re clear it’s something to share with a lover, but we fail to recall it’s much more. It’s also the verb and noun of a woman. It’s trouble. It’s spark. It’s heart. It’s the fire in our belly. It’s the smoldering embers of our soul. It’s the essence of a woman required for all the seasons of her life.

And so, it was for me, too. I forgot. I had lost my fire and hadn’t a clue where I left it, and worse, how to get it back. It would take another few months before I found my center. It was right where I had left it, buried behind boxes labeled, former self, wild dreams, thoughts for a rainy day, and someday I will. The smoldering passion that pushed me to discovery and taking risks was also partly to blame for me getting lost inside of myself. When I walled myself in from the world, I accidently hid me from what made me-me.

I restored and rebalanced by writing letters to myself. I also took up walking since it’s the only time I am completely alone, which turns out to be critical for a woman to maintain harmony in her otherwise manic life.  I think of myself as a work in progress and accept that I will be until I am ash in the wind. Living a passionate life is not complicated but it does require taking risks and tearing down the wall, you hide behind.

Where is your passionate self?

About Brenda: She foolishly said I do to a Brit, packed up what she couldn’t sell into a couple duffle bags and headed across the Atlantic. She found a sister in Dorothy, and thought London similar to OZ. Her larger than life-life, left her feeling anxious and elated, empowered and afraid, mostly she felt topsy turvy. To combat the extreme emotions that sweep through her body at least hourly, if not every other minute, she took to writing lengthy letters home on sheets of blue Par Avion paper. After running out of factoids to report, she took to making up stories. It was in the writing where she glimpsed an unknown dream. Much later, after catching a balloon ride back to the states, and settling into yet another chapter of her life, she realized she missed having a reason to write stories. She bought a journal, filled it, another, and another, and finally, she took up writing as a fulltime passion. She is currently shopping her first novel, and has started working on the second. She suggests if you are tinkering with the idea of writing to always—no matter what anyone says—to trust in your voice. Follow Brenda on Twitter.