Modified Swearing for New Parents By Science of Parenthood 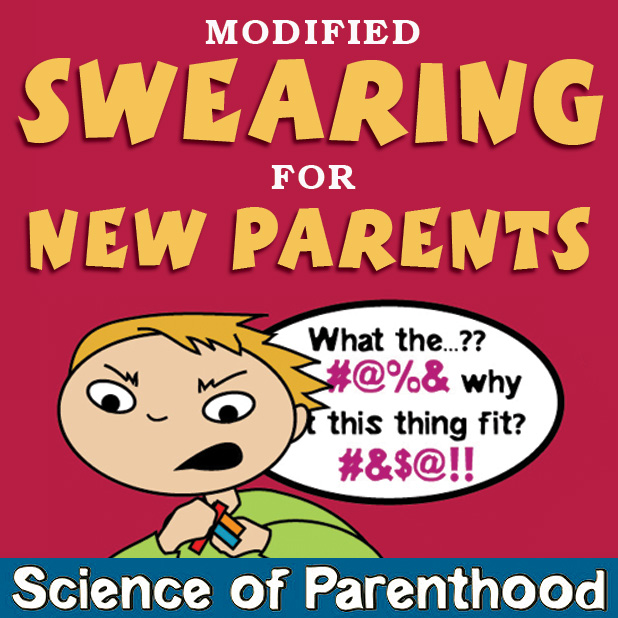 As a new parent, you’ll soon face one of the great parenting challenges: NOT swearing when practically every other minute begs for a full-throated blast of profanity. Your child will be speaking before you know it, and given that kiddos’ sponge-like little brains soak everything in, you’ll need to begin unraveling the rich tapestry of swear words you’ve developed. If li’l Timmy’s fourth word is “shit!” with all its lush intonation, that might get you both kicked out of Gymboree. So, when the urge arises to let loose a stream of curse words that would make Tony Soprano look like a choir boy, try these “substitute” swears instead:

You’ve just stepped on your 10 millionth lego. Faster than you can Flanders it and say, “Gosh and golly, that sure does smart!” that “f” sound has made its way out of your pie-hole. There’s still time to turn this train around! Draw the “f” sound out as long as you need to recover and cap it with “argh”, which is what you meant anyway, right? Fffffffffffffffffffffllllaaaaaaaaargggghhh!!

A surprisingly satisfying midpoint between the F-word and the S-word, it’s got all the sounds, none of the shame.  I can’t think of anything that warrants working blue more than heading to the gym. Can be drawn out to “Fibitty fitbit!” when you see that all the treadmills and stair-climbers are taken, and you’re left with that goddamn rowing machine.

Are the kids screeching at 6am? “Shutties, little ones!” Has the baby decided to cry for two straight hours instead of napping? “Shutties, my darling, shutties!” Is your toddler is making an extremely loud assessment of the BMI of the woman ahead of you at the grocery store? “OMG! SHUTTIES!” It’s a gentler, almost adorable stand-in for “Shut the F up, you GD MFers!”

When I’m behind the wheel, nothing flies out of my mouth quite as readily as the word “jackass.” Jackalope offers a solid quick-save opportunity. Sample usages: “Would you LOOK at this jackalope??” Or “What does this flarghin’ jackalope think he’s DOING??” Best not to use this one if your child, or anyone in your school carpool, is named Jack.