Why Parents Should Stop Telling Their Kids That They Are “Smart” 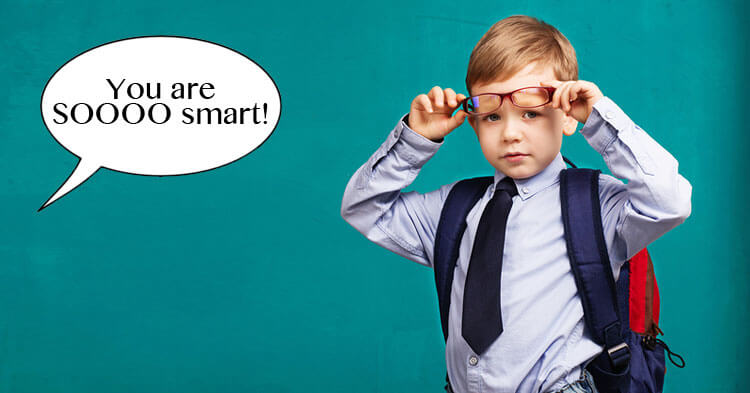 “I’m sorry, would you repeat the question?” I asked, leaning forward. “How soon can we have our daughter tested for ‘gifted’?” he repeated, seriously.

“How soon can we have our daughter tested for ‘gifted’?” he repeated, seriously.

“Well, she is only three years old,” I fumbled. “Our school does not offer a gifted program in preschool.”

“I just feel like she is not being challenged enough. It is clear that she is much smarter than her peers. We want her to be in a gifted program as soon as possible,” he explained while his wife stood, nodding, at his side.

“Your daughter is an excellent student but, I assure you, she is learning a lot from social interactions with her peers,” I said, forcing a smile.

The rest of our conversation echoed into the classroom — a classroom this couple had never spent more than five minutes in, prior to this meeting. I wondered at how they reached the conclusion that the other students weren’t as “smart” as their daughter without spending any time with them. I wondered at how their past educational experiences had motivated them to ask about gifted testing for their three-year-old. She was a student who differed very little from her peers academically. Socially, she had her own struggles.

She certainly did not lack confidence. She was, what I call, “a natural leader.” — That’s teacher-speak for “bossy”, which was pretty common for many of my female students. She knew what she wanted and she was not afraid to ask for it — not a bad thing. I have a soft spot for “bossy” children because I have a small suspicion I was one. However, she had a hard time getting along with others and was very critical of the other student’s work. At the end of the day, she had a well-defined personality and was a normal 3/4 year old.

Where was the disconnect between the little girl I knew and the hyper genius her parents were convinced she was? I spent the whole next day in class, listening to her conversations for clues. There was one word she kept repeating: “smart.”

And then I understood.

James Hamblin wrote an excellent article in The Atlantic that explains the problems that arise from labeling your child as “smart”. The article says,

“’Smart’ kids … become especially averse to making mistakes, which are critical to learning and succeeding.”

When children are labeled as “smart” and “gifted”, they are less likely to challenge themselves. They become possessive of the label and unwilling to accept mistakes or take on challenges, in fear of losing a title. Professor Carol Dweck conducted numerous studies focusing on this issue and found that children who were praised for their ability (“smart”) were more likely to give up and perform poorly after a failure, misrepresent how well they performed on a task, and more likely to view their failure as evidence of low intelligence in comparison to their peers that were praised for their effort.

Praising a child for their effort or process sounds like this, “You really worked hard.” (Effort) “You stuck with it until you found the solution.” (Perseverance) “You did better this time than ever before.” (Improvement) “You really thought this through.” (Thoughtfulness.)

The difference is striking and obvious. Dweck says in her TED Talk, “Process praise gives kids an advantage.” She also stresses that it encourages a growth mindset vs. a fixed mindset. A growth mindset encourages challenges and believes in the child’s ability to learn. On the other hand, “children who are praised for intelligence tend to believe that intelligence is something innate and unchangeable,” Dweck states.

When the children with this fixed mindset were asked what they would do the next time they repeated the difficult challenge in the study, they said they either cheat (instead of studying) or they would find someone who performed worse than they did to make their performance seem better in comparison. When you hear facts like these, it is obvious that this is not the kind of children we are intending to raise. We want to raise strong leaders and people who love learning. We want our children to have the growth mindset that Dweck speaks of.

Never afraid to face a challenge or give you this piercing, sassy look

How do we do it? Praise our children, thoughtfully. Tell them when they have done something wonderful.

Refrain from telling them they are “smart” or intelligent. After all, even smart people do “stupid” things sometimes.

Intelligent people make mistakes. Do your child a favor and stop using the “S” word. And, about that student from earlier, she was challenged in the classroom and she learned a lot. So did I.

We grew, we learned, we conquered.

Kayt Molina currently lives in Miami, Florida with her husband, two children (one still in utero), and their loyal dog, Salinger. She is a voracious reader, former preschool teacher, and cooking show addict.
Next Article