A (Romantic) Dinner For Two 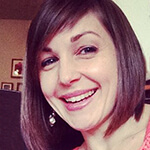 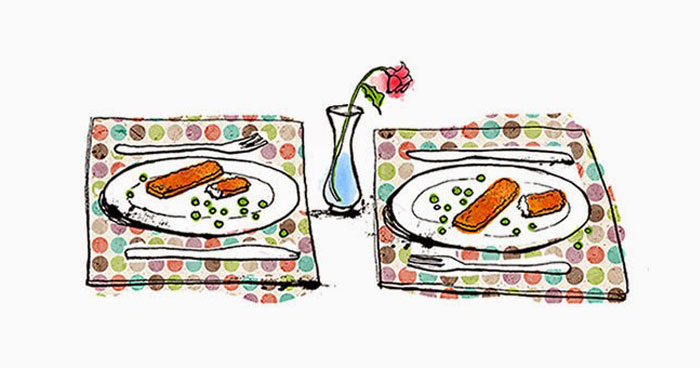 I sat down at the dinner table with my husband last night after both children were finally sleeping. I say dinner table, but that’s a glorified description of a table that is mostly used for unopened post, half broken crayons and little cups with leftover breakfast juice. A dinner table implies that we have dinner, complete with place mats and heated plates, perhaps a candle to illuminate our home-cooked masterpieces – a far cry from the reality of last night’s leftover takeaway dish, served with now slightly soft prawn crackers. Still, it’s better than the half-eaten fish finger rejects and cold peas which will probably be on tonight’s menu instead.

We used to sit down at our once dinner table, now utility table, and discuss how our days had been. “How are you doing?” My husband would ask, which would provoke a series of tales of how I had to deal with an interesting client at work or how I was thinking of taking up salsa. Last night’s dinner conversation went like this:

How are you doing?
Tired.
How about you?
Tired.

That was it. That was all we could muster as I gobbled up my sweet and sour chicken and rested my elbow in some half dried play dough. Tired. We’re always tired. We’re so tired it’s now become boring. We’re boring each other with our exhaustion.

There comes a point in your relationship when you just seem to coexist. You’re no longer investing in quality time, just surviving one day after another. I used to mock couples out for dinner who would sit in silence without an ounce of conversation. How could you ever let that happen? I would think. Now it seems more of a reality than ever before. It’s easy to see how years of family life can wear people down, leaving decades of unused place mats and a trail of broken marriages. But it doesn’t have to be that way. Okay, so no amount of caffeine is going to restore our zest for relationships on three hours sleep but if we don’t start when we’re at our lowest then we’re headed for disaster. There has to be a way to invest in relationships when we can’t even find the energy to speak.

And so I’ll tell you what I think it takes…

Instead of affectionately brushing the hair out of my eyes (not that he really ever did that), he is now affectionately wiping the baby sick out of it instead.

It’s his brush against my arm as we pass briefly on the stairs.

It’s when he overlooks my soft, round belly and he tells me that I’m beautiful.

It’s when he hugs my tired bones instead of just walking by.

It’s when I thank him for reading bed time stories and making me tea and toast.

It’s when I stop my ‘urgent’ tasks to ask him good questions – not just how he is – but what made him feel good or pissed off today.

It’s making choices to be kind instead of reacting out of tiredness, or boredom, or sheer frustration.

It’s when we high five that we made it through another day and we’ll do it all over again tomorrow because we have each other.

Now excuse me while I serve up some cold fish fingers and peas. 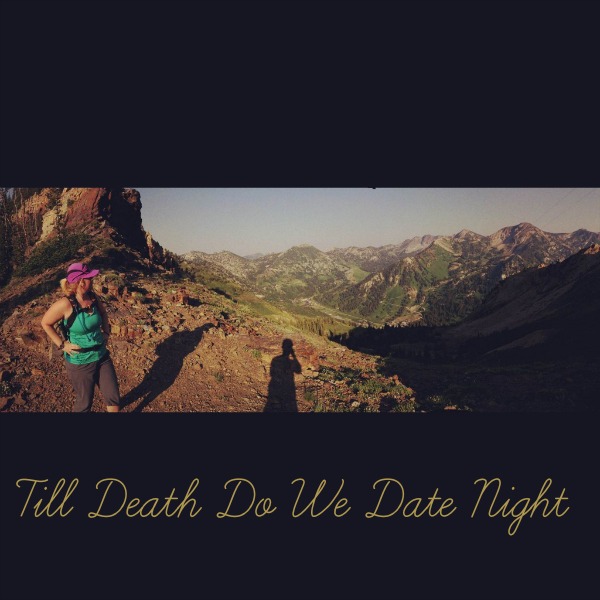 Till Death Do We Date Night by The Kid Project 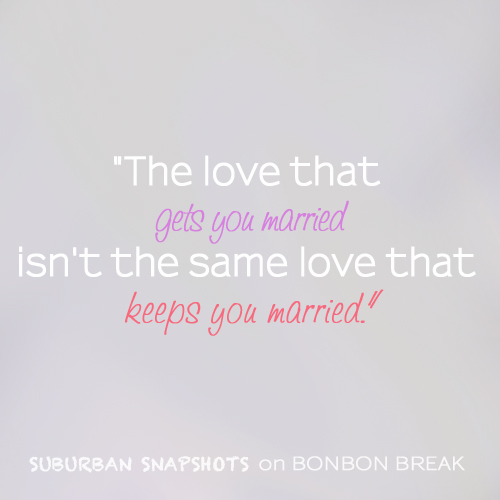 The Love That Keeps You Married by Brenna Jennings

I am an artist, designer, mother and blogger, juggling illustrating children’s books with changing dirty diapers. I started my blog ‘Mother Diaries’ as a series of diary entries from my first year as a parent, determined to be brutally honest about my trials and tribulations as a mother. Since then the blog has evolved to discuss topics that break through some of the pressures mothers feel to be the perfect parent, as well as having a giggle along the way. I am a mother to two beautiful boys who keep me on my toes and out of chocolate cookies.
Next Article