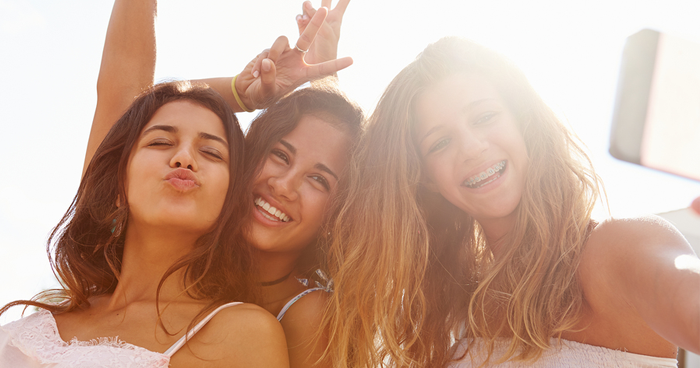 You probably never thought you’d see the day when Facebook wasn’t the center of teens’ universe. But keeping up with Facebook friends through ad-filled news feeds and lengthy profiles, especially given the fact that everyone knows your name, is starting to feel tiresome to many teens.

Facebook is still a go-to place for many things, such as wishing someone a happy birthday or stalking a crush. However, newer social apps make it easier, faster, and more fun to capture and share fleeting moments — sometimes anonymously. These temporary and anonymous-messaging apps provide an environment that feels more appropriate to the random, silly, saucy, and experimental sides of the average teenager.

Perhaps most importantly to teens, these apps can feel consequence-free. But, of course, they’re not. Data never really disappears, and anonymity carries big risks. If you don’t recognize the apps your kid is currently obsessing over, here’s what you need to know:

Temporary apps allow people to send messages and images that self-destruct after a set window of time. Teens can use these apps to more carefully manage their digital trails — so long as they don’t share things they wouldn’t normally send otherwise.

Snapchat: A messaging app that lets users put a time limit on the pictures and videos they send before they disappear.

Why it’s popular: Snapchat‘s creators intended the app’s fleeting images to be a way for teens to share fun, light moments without the risk of having them go public. And that’s what most teens use it for: sending goofy or embarrassing photos to one another. Teens may pay more attention to Snapchats, knowing they’ll disappear in a matter of seconds.

Why it’s popular: Its text-only platform, plus its unique display system that reveals only one word at a time, make it feel more secretive than similar apps.

Slingshot: Facebook’s answer to Snapchat. The twist is that before you can view a photo or video you’ve received, you’ll have to send the sender a shot of your own. After you’ve viewed it, the shot disappears.

Why it’s popular: The video or photo options paired with the ability to type or draw on the shots create an easy way to share brief moments and fun, creative messages.

LINE: A multifaceted text, video, and voice-messaging app that also integrates social media elements such as games and group chats.

Why it’s popular: Teens are drawn to LINE not only because it’s a bit of an all-in-one mobile hub but also because it offers a lot of of teen-friendly elements, such as a selection of over 10,000 stickers and wacky emoticons, as well as LINE Play, an avatar-based social network. The free texting and video calls don’t hurt, either.

On the positive side, going incognito online helps us express ourselves in ways we might not be able to in the real world. On the negative side, anonymous apps are often riddled with inappropriate content. They also can encourage bullying behavior.

Whisper: A social “confessional” app that allows users to post whatever’s on their minds. Users type a confession, add a background image, and share it with the Whisper community. It’s intended for users age 17 and older.

Why it’s popular: There’s something to be said about sharing one’s innermost thoughts without any repercussions, especially if they’re not socially acceptable: It’s cathartic. For those who simply choose to browse, Whisper can be amusing, heartbreaking, troubling, and comforting all at once.

Ask.fm: A social site that lets kids ask questions and answer those posted by other users — sometimes anonymously.

Why it’s popular: Although there are some friendly interactions on Ask.fm — Q&As about favorite foods or crushes, for example — there are lots of mean comments and some creepy sexual posts. This iffy content is part of the site’s appeal for teens.

Omegle: An anonymous chat client through which users discuss anything they’d like. Its conversations are filled with lewd language and references to sexual content, drugs and alcohol, and violence.

Why it’s popular: Online chat rooms have been around for ages, as have the iffy and inappropriate conversations that happen in them. Though there are many misconceptions about “online predators,” it’s true that risky online relationships — though rare — more frequently evolve in chat rooms when teens willingly seek out or engage in sexual conversation.

Cloaq: An anonymous posting site that doesn’t collect any personal information and assigns random usernames. Users can post text and pictures and comment on content from sites such as Buzzfeed and Mashable.

Why it’s popular: Cloaq is gaining traction because its community is relatively supportive of its own members. Some users claim that they “hold themselves to a higher standard.”

The best way to approach these apps with your kids? Talk to them about their online reputations — not in terms of “getting caught” by teachers, college admissions officers, or future employers but as a matter of being true to themselves. Acknowledge that, chances are, they’ll come across extreme, inappropriate, or hurtful content online … and that it’s OK for them to ask you about it, especially if it upsets them. These kinds of conversations will be far from fleeting — the benefits will last a lifetime.

Common Sense Media is an independent nonprofit organization offering unbiased ratings and trusted advice to help families make smart media and technology choices. Check out our ratings and recommendations at www.commonsense.org.
Next Article