Letter to Me circa 2003 by Toulouse and Tonic 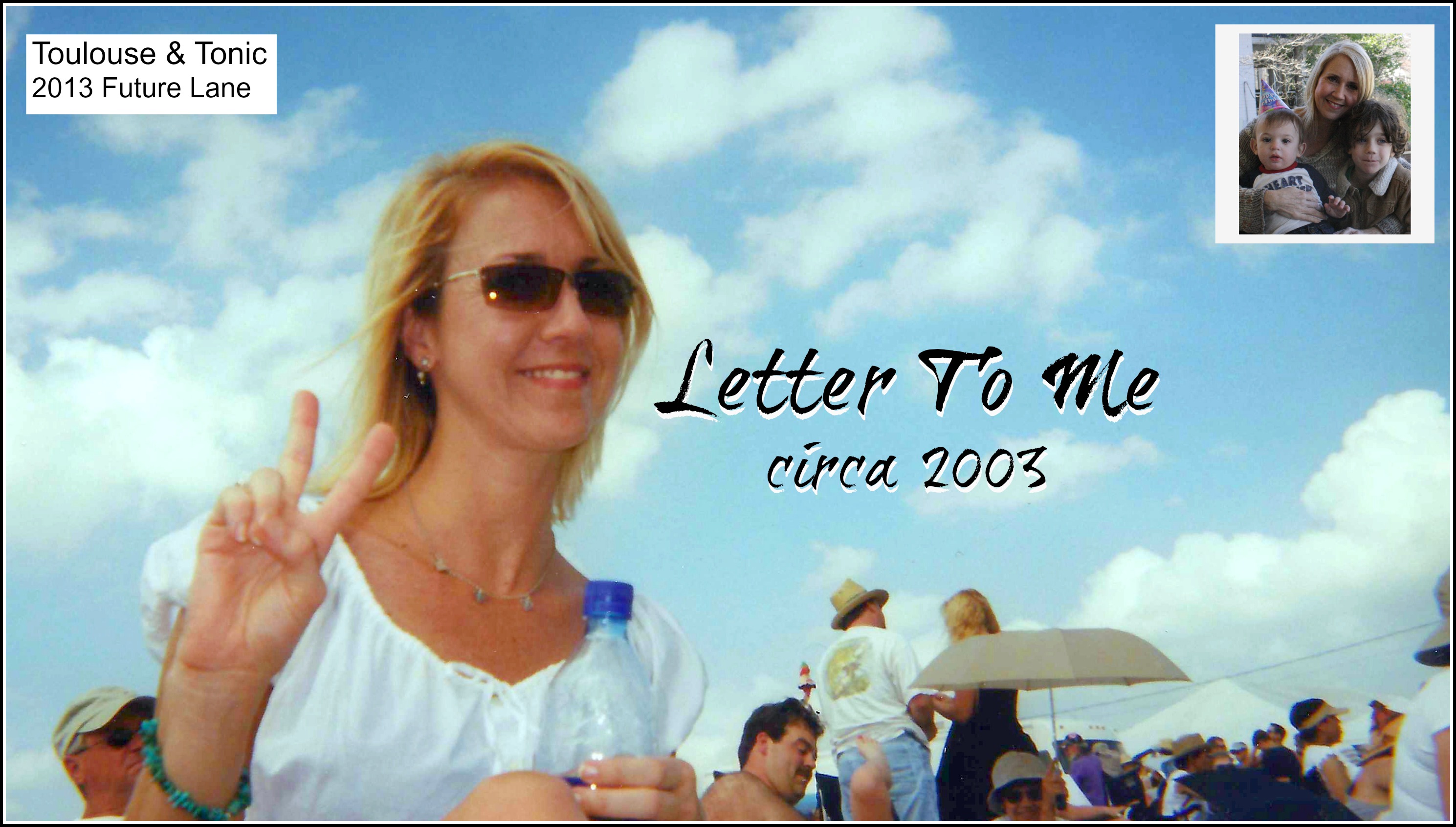 Sorry to interrupt you there, lying on the couch recovering from your hangover.  If you’ve finished rehashing every single minute thing that happened when you were out with your friends last night on the phone with those very same friends and have a few minutes before you resume that Sex and the City marathon, I’d like to give you a little advice.

No, no.  Totally go ahead and finish your cheese Krystals first.  Cold fries are like, the worst.

Yes, you drink too much and stay out too late.  You skip too many meals and then binge on fast food when you’re hungover.  You’re obsessed with not looking fat in your jeans and can’t stop buying cute heels.  You have no one to think about but yourself yet still don’t think you get enough “me” time.

But I’m not writing to chastise you about those things.  I want you to DO MORE OF THEM.

You see, your life is gonna change so much soon that you’ll never recognize it ever again.  All the things you know now, you should enjoy with abandon because they’re almost over.

First, stop whining about wanting to meet someone.  He’s just around the corner.  In fact, you’ve already met him and shared your first kiss.  Before long, he’ll be the last guy you ever sleep with, so…you know…have some fun.

And that whole personal policy about tequila being the coffee of the clubs?  As long as you’re not driving, have at it.  In a few years, you’ll have no idea what the world outside of your home looks like at 2am.  And here’s a tip for the future: tequila will NOT help keep you awake when your baby’s crying in the middle of the night.  Trust me on that one.

Enjoy the hell out of the fact that you need to think about food for 3.4 minutes out of your entire day.  Maybe you ate the exact same thing for breakfast, lunch and dinner.  No worries!  Salad with grilled chicken for lunch 8 days in a row?  Check and on to something far more fun than food.

In a few years, you’ll begin to despise everything to do with food as you become responsible for an entire family’s round-the-clock nutrition.

You’ll wake and feed the dogs, the kid, the husband, the baby — and then you’ll eat the cold half of a cheese toast that’s still sitting on the kindergartner’s plate an hour after he’s left for school.  And then — lunch time!

So don’t sweat it.  Eat that Lean Cuisine and get on with your life.  Actually, eat 2.  Those things aren’t enough food for a cat.

You just saw a Counting Crows show in New Orleans, right?  And this weekend, you’ll be elbowing your way to the front row at Robert Bradley’s Blackwater Surprise.  I commend you and urge you to see every freaking band that comes within a 250 mile radius.  Make eyes at the guitarist.  And the drummer.  Get on the tour bus.  Go to the after-party.  You don’t smoke?  Who freaking cares?  If G. Love asks you to smoke with him, SMOKE WITH HIM!  I already know you’re not gonna do it but geez, I’m tired of smacking myself in the head.

This one’s gonna be hard for you to imagine and I can already see you shaking your head NO, but in a few years, your “favorite new band” will have been around for 4 years already by the time you find out about them.  You just won’t have the time.  But there is a bit of good news…you don’t play that Barney shit for your kids.  Your kindergartner’s favorite song is by The Avett Brothers — your “new” favorite band.

Also, go to movies.  Once the kids come, you’ll be shocked to find out there are still actual things called movie theaters in existence.  You’ll come to think of the DVD release of a movie as its premier.  You’ll netflix that film you’ve been wanting to see and then it’ll sit on your entryway table for the next 3 months until you finally give up and send it back.  So watch the previews, stay for the credits and eat an entire tub of popcorn.  With butter.

What’s that you say?  You’re flying to Cabo for your birthday in May?  After you get back from SXSW in March, of course.  Nice.  Well, that leaves the rest of February AND April free.  Plan 2 more trips.

Oh packing is a hassle, is it?  Here’s a dose of perspective.  Ten years from now, it’s gonna take you 7 hours straight to pack for your household just to take a short trip to your in-laws house for the weekend.  And the drive?  You know how you pride yourself on being able to make a 4-hour road-trip without ever stopping to use the bathroom?  You’re making up for it 10 years in the future.  There’s not a gas station restroom you don’t know intimately between your house and the whole two places you ever get to travel.  Hint:  it’s not Cabo.  It’s either set of grandparents.

In other words, go everywhere.  Because soon, you’re not going anywhere.

So hey ME, get up off that couch and get back out there.  You’re gonna live a very good life in the future, but today?  Today you’re livin’ the good life.  Rock it out, girl!

ABOUT TOULOUSE: Toulouse is a SAHM of 2 stinky boys who works hard to increase her mothering skills by stalking other mothers on facebook, tweeting funny bon mots on twitter, pinning hilarious sayings about drinking wine onto her pinterest page, and exercising her family’s sense of humor by writing about them at www.toulouseandtonic.com.  While her methods are unorthodox, she is succeeding at making her kids hate her one post at a time.

This post was written by Toulouse and Tonic exclusively for Bonbon Break Media, LLC

Girl Talk by Only You