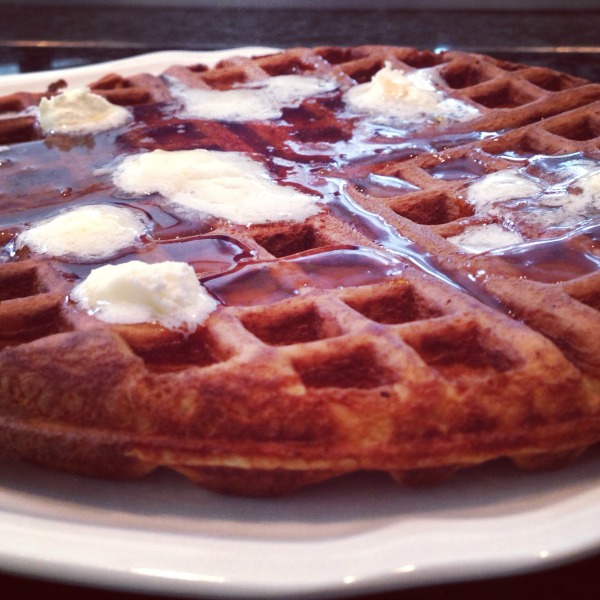 These days, especially in food literature, social media and blogs, I see the term heirloom quite often. Usually the reference is to tomatoes or seeds. Well when I think of heirloom and food I have only one thought…waffles. Here’s why…

In the late 1940’s, my grandmother Esther worked at a luncheonette in Elizabeth, New Jersey. The proprietor was her brother and the business ultimately failed with Grandma’s wages in arrears. Her recompense was a shiny, new stainless steel Toastmaster Waffle Baker. Not exactly a short-term prize for a now unemployed young mother, however, little did she know how long lasting the benefits of this disregarded kitchen appliance would be.

For as long as I can remember, I have been eating waffles baked by this amazing machine. My grandparents lived next door to us and I ate many meals throughout the week there. However, Saturday mornings were reserved for waffles. Crunchy on the outside, soft on the inside, there simply was nothing better than a waffle slathered in butter covered in maple syrup. No matter the weather, these beauties were always in season.

Childhood grew into adolescence and my weekly breakfasts with Gram and Gramps were mostly supplanted by sports, music, friends and other more appealing facets of growing up. They were still there eagerly waiting for my brothers and me to stop in but, far too often, we ran by their window waving to them as we rushed off to what was more important at the time.  Adolescence faded into the high school and college years and then young adulthood when I would again find the time to spend an occasional weekend morning enjoying their company and the waffles. Eventually, my future wife joined me and she fell in love with my grandparents, the waffles and me, in that particular order!

My grandfather died in 1990 and my grandmother felt the need to revise her will. She didn’t have much beyond sentimental value things and I took the opportunity to formalize the waffle baker passing to me upon her death. I was a bit selfish but, I didn’t want to risk one of my brothers making off with the waffle baker. We all love it and as the oldest I felt it was my birthright. Sorry bros. I had possession of it for many years prior to her death in 2000 and in 1995 began making waffles for my then one year-old twin daughters.

At least once a month, I would drag out the very heavy waffle baker waking them up from their slumbers with the same waffles that I enjoyed as a kid. Anytime they had friends sleepover, I’d feed their friends these delightful delicacies. I can’t remember anyone ever saying, “I’d rather have cereal!”

They are now nineteen and away at college, however, the first breakfast they have upon their return home from the cafeterias of college dorm life is a waffle. And not just any waffle, a very special heirloom waffle made by a machine that is now almost seventy years old. It requires very little care, just a bit of TLC after each use and an occasional polish to keep its stainless glistening while it patiently awaits the next generation’s Saturday morning breakfasts. Heirlooms you see are both physical and emotional, they bridge generations and sustain and create memories that go beyond mere sustenance. Enough writing, I’m heading to the kitchen to see my old friend.

In a nod to the realities of being 52 and my health conscience avoidance of gluten, cow dairy (casein) and sugar in my diet, I’ve developed a delicious organic buckwheat waffle that maintains the most critical element of an excellent waffle…crispy on the outside, soft on the inside. I can’t discern much of a difference in the taste and texture of this waffle as compared to a traditional white flour waffle, however, the mixture is darker as is the finished waffle. Whether you go traditional or modern, you will love your waffles. Know you won’t have the best ones, since they come from the waffle baker pictured below. Enjoy!

A. Combine 1 through 5 in a large bowl
B. Beat 6 with a wire whisk in a clean stainless steel bowl until just about firm.
C. Add 7 to B and whisk until soft peaks are present
D. In a medium bowl whisk 8 through 13
E. Pour D into A and combine gently until fully incorporated
F. Gently and slowly fold C into E until the egg whites no longer are visible
G. Pure into a hot waffle baker.
H. Remove from waffle baker and pour the maple syrup over them.
I. Eat immediately and enjoy!

ABOUT MIKE:  The author, 52, was born and raised in Elizabeth, New Jersey and is a from a large Italian-American family of professional and home cooks. A Certified Public Accountant and management consultant by profession, he is by aspiration a world traveler, home cook, bicyclist, singer and lover of life. He loves all things Springsteen, counts Italy and Hungary as his favorite places outside of the good ole U.S.A. and would spend everyday at the Jersey Shore if possible. He is married and the father of two daughters getting ready to go to college.

This post was written by Mike Colicchio exclusively for BonBon Break Media, LLC.