Expanded 5-Second Rule for Experienced Parents by Science of Parenthood 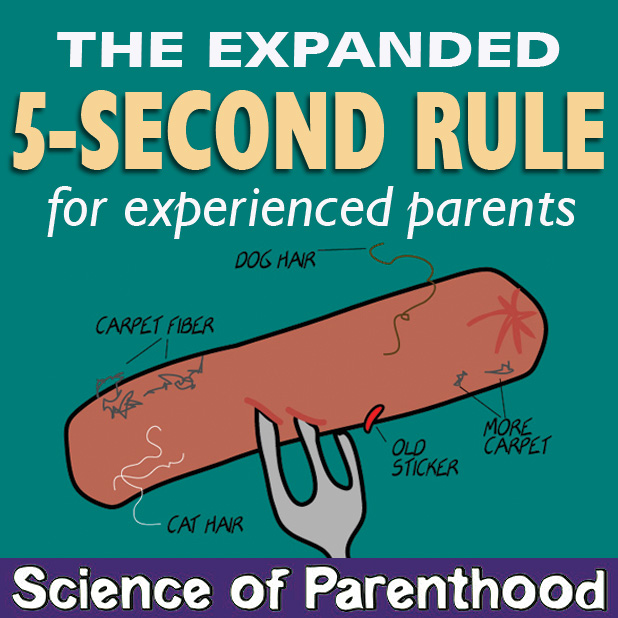 When you first have children, your Parental Threat Level is an eye-searing red for at least six months. You’re buying anti-bacterial everything and tossing food that has been exposed to nothing more hazardous than air for more than 15 minutes. Over time though … well … things happen. Like when your child chirps, “I found a raisin under the couch!” And gobbles it down before you can even spin ‘round to look.  Raisin? Hmm … you haven’t had raisins in the house for at least three months, but you did serve grapes two weeks agooo … OH MY GOD.

But, each time you see your child pop Food Of Questionable Origin into his or her mouth and survive, the Parental Threat Level gets knocked down a peg. Where you initially saw red, your anxiety level eventually drops so low, it’s really a more of a green-verging-on-falling-off-the-chart-beige. Foraging for snack foods in the backseat of the minivan is no longer feared, but expected. And you can pretty much guarantee that anything that’s rolled under the couch is destined, in time, to find its way down a young gullet. What doesn’t kill you makes you stronger, indeed.

Naturally, you’re acquainted with the Five-Second Rule, regarding the advisability of consuming food that’s hit the floor. Here we’ve come up with some additional off-the-plate “safety” guidelines.*

Any food, including that which has already been in any other mouth — including the dog’s.
Typical items: Pre-licked chocolate, popsicles, all fruit (the wetter the better), deli meat, dog treats, pudding.

Any solid foods, including those which have already been in someone else’s mouth — preferably human.
Typical items: Chicken nuggets, lollipops, noodles, bacon, scrambled eggs. Essentially, if you can get to it before the dog, it’s yours!

Any solid foodstuff found on your clothing (which you are still wearing from yesterday). It’s easier to pluck it off and eat it than to find a clean t-shirt.
Typical items: Cheerios or Puffs, fruit leather, and bonus! pieces of chocolate-chip granola bar. Yum!

Anything found in and around a car seat is fair game, mainly because you have no chance of preventing this free-range snacking while driving.
Typical items: Half-eaten cookies, goldfish cracker flakes, M&Ms, old French fries, dried fruit (purchased as such … or not).

Anything in its original wrapper, no matter how deeply buried in the toy box.
Typical items: Candy, desiccated gummy snacks, crushed baggies of cracker dust.

IMPORTANT!
Zero-Second Rule: DO NOT EAT UNDER ANY CIRCUMSTANCES

Anything dropped in/near the toilet, at the dog park, or on the floor at Walmart. Let’s have SOME standards.

*This statement has not been vetted by the FDA, CDC, CIA or FDIC