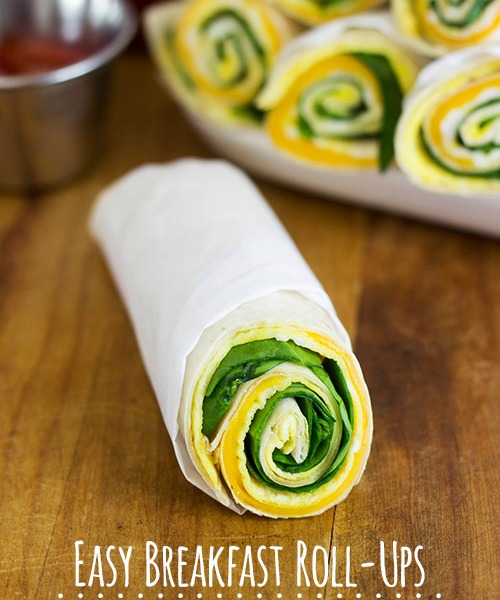 Breakfast Burritos are a favorite meal in the morning, but not always the most child-friendly choice. For kids who like to dip, the egg falls out and even if they aren’t dipping, pieces of egg seem to have a mind of their own with more egg ending up on the floor, rather than in their tummies. These easy Breakfast Roll-Ups were inspired by breakfast burritos, but they solve the falling egg dilemma since the egg is cooked flat like an omelet, instead of scrambled. They are also easy to customize — fill with the ingredients you love and leave out the ones you don’t.

ABOUT BRANDIE: Brandie Valenzuela is a wife, mom, and food blogger who lives in fabulous Las Vegas, Nevada. Years ago, Brandie avoided cooking, and found herself having dinner through the drive-thru more often than she liked. To motivate herself to cook at home more, and to make food memories her kids would cherish, she created her blog, Home Cooking Memories in 2010. It wasn’t long after she started blogging that she quickly realized that even simple meals were creating lasting memories with her family and that her kids loved 30 minute dinners, just as much as ones that took hours. This inspired her to keep her sanity while focusing on family-friendly recipes that are creative and delicious, but also easy-to-make.

Baked Parmesan Crisps by Under the Table and Dreaming