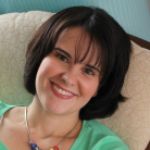 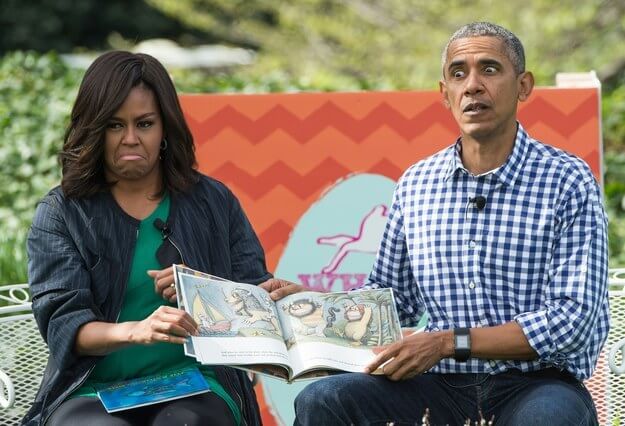 I saw the pictures of the two of you reading Where the Wild Things Are at the White House Easter Egg Roll. Besides being completely jealous of those who got to be there, I also found myself in awe, as I often do, of the two of you.

You see, in looking at these pictures, I didn’t just see two confident people reading in a goofy way to a bunch of kids. Nope. I also saw two examples of humanity, kindness, and confidence.

It’s no secret that I am a huge supporter of your politics, President Obama. One of the things that makes me so proud to have both of you as the representatives of our Nation is that there is more to you than politics. You clearly have a sense that everywhere you go, you are not only representing your own political views. You know you’re more than just representatives of the United States of America. It is clear that you both realize you are humanitarians. You are examples of goodwill.  You are an example to children and adults alike, of how to be confident in who you are. Today, when my six-year-old son, Ryan, gets home from school I will show him this video of the two of you reading.


You see, Ryan delivered his first ever “presentation” in front of his class. His homework for a few days leading up to this presentation was to practice in front of his family. Having grown up competing in speech and debate, I was eager to help Ryan with this project. As he practiced his “When I grow up” speech, I coached him on how to look at his audience, how to effectively use hand motions to get his point across, and how to speak loudly, and not into the paper he was holding. A few times he said to me, “This is embarrassing.” He’s getting to the age where he understands the concept of embarrassment. To be honest, if he was your kid, watching you read at the Easter Egg roll, he might have been embarrassed too. Maybe Sasha and Malia were?

But he’s not your kid. He looks up to you. He knows you’re our “Big Leader Guy” and even if he didn’t state that he’d like to follow in your footsteps as President of the United States in his first big speech, he does respect you and thinks you’re pretty cool. So, yes, I will show him the video of the two of you reading Where the Wild Things Are, and we will talk about how it can be fun to be silly and goofy in front of a crowd. We will talk about how the two of you weren’t concerned about what other people would think when you made those awesome faces. You were just having fun and being yourselves. We will talk about confidence, and I will hope that just a little bit of the message sticks. If we’re being honest, I will hope that a lot of your messages stick.

I told my husband, “I think this is as good as it gets. I don’t think our children will ever see another President and First Lady who are better examples of how to be a good person,” than they have seen in the two of you. Sadly, two of my three children will likely never remember your presidency. Zachary and Connor are only three years old and 18 months.

But, I promise, they will know. I will share stories of your honesty, integrity, and leadership skills with them. I will explain that when I had the great privilege of meeting you, Michelle, in 2009, when I worked at Children’s National Medical Center I saw firsthand that your kindness and compassion is not just a show; it is genuine and natural. At the time, I was 8 1/2 months pregnant with Ryan. You asked me about my pregnancy. You put your hand on my belly; you wished me the best of luck. You didn’t just go around and talk with patients and families. No, you sat with them, you engaged, you cared.

I know plenty of people disagree with the two of you on many issues. I know many people do not think as highly of you as I do. And honestly, I have a hard time understanding that. Politics aside, you are true role models for children and adults alike.

As you end your time in the White House and begin to think about your legacy and the work you will do for the remainder of your careers, I challenge you to think of ways you can continue to have an impact on the youth of our world. I don’t want any of my children to forget you.

Please, remain in the public eye. Please continue to show the world what it means to be happy, confident, smart, fun, and kind. Show the world what it means to have integrity; to have strong beliefs and to stand up for what you believe. Don’t hesitate to continue to be an example of a successful marriage raising successful children. Our country and the world need more of the two of you.

President and Mrs. Obama, our world may not fully recognize it yet, but we have much to thank the two of you for. I think in the years to come it will be more obvious. I, for one, am most grateful to the two of you for putting a face on what it means to be compassionate and human, and for never making yourselves seem “above” the people you have served and represented during your time in office. I believe you think of yourselves just like the rest of us do: people doing the best we can, to do the best we can, in all we do. You have succeeded. Thank you.

Kristen is a thirty something mom to three boys, wife and Social Worker. She loves her boys, coffee, taking pictures, writing, going on hikes with her guys, running (when she finds the time), laughing, Twix, doing anything as a family of five, spending time with their very close extended family, and dancing (but only in the crazy/silly, in the family room with her boys. She has no actual dance skills). She likes to think she's a pretty fun and easy going mom. But she is constantly fighting the obsessively organized and structured being that lives deep within her. Most days the fun, easy-going Kristen wins out. She hates whining, people who ask if she's going to "try for a girl," and black licorice. She's a mostly stay at home mom. When she worked full time, she worked with children with chronic and terminal illnesses and their families. Being with these families in their darkest hour was the greatest privilege of her life, besides being wife to Matt and Mom to Ryan, Zachary, and Connor. She was also lucky to have a "Family Centered C-section" with her third son, and she's on a mission to make this possible for more women who would like the same awesome birth experience. Mostly, she's just a mom trying to survive each day with her sanity intact.
Next Article