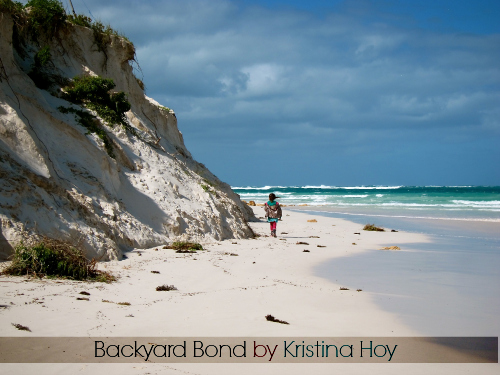 Our backyards have been separated for almost three years now. The deep blue of the Pacific separated my island from hers. But our friendship continued. What began as a bond over babies (we met at a new mothers group more than six years ago) grew into a connection via sport (we played on the same netball team and are both avid runners) and baking triumphs (we love cake). The bond we share now is even greater. And currently stretches right across the immense dusty flat of the desert that fills most of central Australia. She lives on the east; I reside on the west.

Over this time our backyards have expanded. Mine spread upwards into the great, majestic Koolau Mountain Range (these run for 37m/60km along the eastern side of O’ahu, Hawaii); across the white sandy stretches that make the Kailua and Lanikai beach shores (the sand so powdery fine that any excursion here was long remembered…); into the impressive and somewhat formidable craters that adorn the islands (the 4-mile hike through the crater of an active volcano on the Big Island’s National Park was unforgettable).

Our scope outdoors continues to grow. Traveling inland here we stop at the dunes – smooth hills created from piles of white sand (the colour so light, the space so vast that it feels like walking into a different world) and weave our way between the Pinnacles (tall-ish limestone formations that sit within the yellow desert plain of the Nambung National Park, Western Australia).

But it was when we walked along the coastline of Lancelin last weekend, admiring the beauty of the Indian blue, that I thought most of my friend.

It wasn’t just our backyards that had expanded. Our children’s had grown too.
We held their hands along hikes.
We helped them climb over rocks.

We let them run free and splash in the often-foamy water that waves bring as they crashed into the shore.

And when it was time, we showed them how to see.

How to sit ever so quietly and watch as a crab laboriously carried bundles of sand away from the hole he was trying to dig.

How to look – without moving – as a nest of newly-hatched shearwaters snuggled next to their mama.

How to spot a spout of water in the distance and know that if they stayed, they would soon see the whale to which it belonged.

Their world was suddenly larger.
And my friend and I? Well – we couldn’t be prouder.

Curiosity has caused the traditional fences that surround a backyard to become invisible, and in its place is just space. Space big enough for us all to explore – she from the east; me from the west.

About Kristina:  I have two beautiful young children. We love to cook and create together. We like to whisk up pancakes and eat little creatures made from fruit. We like to paint and knead warm, colourful play dough. We like to play games and find words that rhyme. We like to explore new places and things. We love to hike, swim, run, splash and yell into the wind! And we share some of these little things here. (Profile photo by Alyse Thomson)