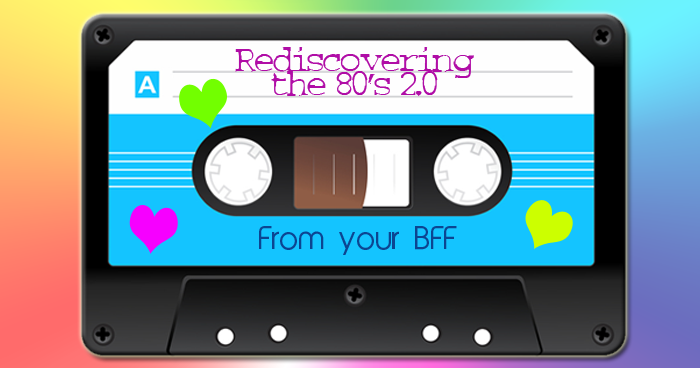 As they say, everything old will be new again.

Or, maybe, everything old will be cool again.

And we Gen Xers couldn’t be happier. We snatch up jelly shoes and Birkenstocks when they return to stores shelves. We talk about the Brat Pack and John Hughes movies with a wistful sigh. We excitedly watch Home Alone with our kids and proudly belt out the lyrics to Rappers Delight by the Sugarhill Gang when it pops up on our SiriusXM 80s station.

And we deem ourselves to be cool once again.

Except what if you weren’t one of the “cool kids” back then?

I have to admit I do feel a certain nostalgic pride when fashion trends from my youth make a comeback, the movie icons return to the spotlight, and trendy clubs play Prince instead of Maroon 5. But, for the most part, I feel a little lost in the Eighties 2.0.

My husband is about to celebrate a certain milestone birthday and, to celebrate, I bought him a much-desired retro cocktail table arcade game from our childhood. “It’s got more than 60 Old School games, Dad!” my kids announced with delight when we surprised him.

While my heart swooned a little to hear them use the words “Old School” and it has been refreshing to see them play a game other than Minecraft or the latest Wii game, I have been made keenly aware of a harsh fact: My kids are cooler than me, not just in their own generation but when it comes to mine as well.

Many Gen X pop culture references are lost on me, still. I have never seen Singles, Goonies, Princess Bride, Indiana Jones, or any James Bond movie. I’m not sure who was even in the Brat Pack, and I may have Googled “Andrew McCarthy” recently to find out who he is. There was an original Mad Max? Who knew?

And don’t even get me started on fashion. I didn’t tight roll my jeans until the trend was on its way out – just like I didn’t start wearing skinny jeans until boyfriend jeans were in. And now I just throw on yoga pants even though everyone tells me athleisure clothes (i.e. expensive sweat pants) are all the rage.

I preferred the Babysitters Club books to the Goosebumps series, reading about babysitters long after they were age appropriate. I never quite got the hang of Jazzercise (was it dancing or aerobics?), and it took one attempt at Zumba to realize that this would be the same. I never went to a New Kids on the Block, Back Street Boys, or N’Sync concert. I prefer Johnny Depp to Justin Timberlake. And I first heard the words Jem and the Holograms two days ago and I’m still not quite sure if it’s a movie, tv show, or band. (Are they even still called bands?)

I was always a few steps behind back in the 80s, which means that I’m probably even further behind on the 80s pop culture trends in their resurgence. The big difference, however, is that back then it bothered me to be in the dark about pop culture and now…well… it just doesn’t.

Now that we Gen Xers are raising children who are the ages we were back in the 1980s, we seem to be moving into the Eighties 2.0 and All Things 80s are cool again, which provides a harsh reminder of just how uncool I was back then. But even though I still may not be in-the- know when it comes to 80s pop culture, I’m perfectly content to embrace my naiveté.

Because it means that I get to watch Star Wars for the first time at the same time my sons are also seeing it for the first time. My son and I can figure out how to get that damn frog across the street playing Frogger for the first time together. And I can experience the Eighties 2.0 as if it were the original, right there alongside my kids. It’s kind of like getting a do-over, experiencing all these things with the same fresh eyes as my children.

Any that might be the coolest thing of all.

Listen to our podcast with Christine on BonBon Break LIVE

ABOUT CHRISTINE: Christine Organ is the author of Open Boxes: the gifts of livinga full and connected life. Her work has appeared on The New York Times and the Washington Post. She regularly contributes to Huffington Post and Scary Mommy, and she writes at christineorgan.com. She has appeared on Headline News (a division of CNN) and WMTV-15 (NBC affiliate in Madison, WI).

This post was written by Christine Organ exclusively for BonBon Break Media, LLC.