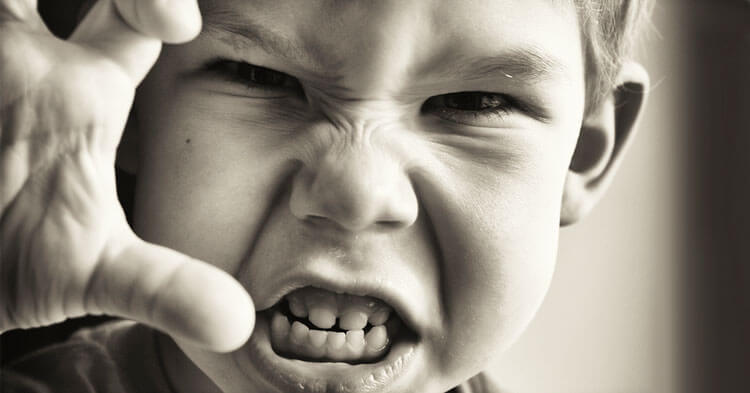 This month, my wonderful, adorable, once angelic little 18-month-old son started hitting. The swats have been directed only at me or my husband so far, but I’ve been increasingly nervous about what happens when he decides to hit my nanny’s kids, my friends’ kids, or worse—a stranger’s kids? What if he grows up to be the class bully, and hits other kids at school? What causes my son to act out aggressively, and how can I stop it?

The first thing I had to tell myself is that most toddlers hit—it’s a completely normal behavior. By 18 months of age, toddlers are completely capable of feeling anger and frustration, but their limited vocabulary provides them with very few outlets for expressing their negative emotions. So, they cry, they hit, and many of them even bite. Some toddlers have personalities that make them more prone to anger or frustration, making them even more likely to hit than others. Just being male, for example, makes a toddler more likely to be aggressive than being female. Boys are more physically aggressive than girls from a very young age. That doesn’t mean that girls aren’t aggressive too, they are just more likely to use other forms of aggression, such as verbal aggression, or relational aggression, which involves manipulating relationships to harm others.

Personality and sex are things you can’t do anything about—toddlers are probably going to engage in some hitting, and there’s very little you can do to prevent it. But, witnessing violence also perpetuates it, so there is a lot you can do to keep it from escalating.

There is this saying that “violence begets violence,” which comes from the idea that kids who are consistently hit or abused are the ones who are the most likely become aggressive themselves. There is some research that supports this link. But you don’t have to be a child abuser to promote aggression at home. Spanking, for example, which is not currently considered a form of child abuse (although this issue in controversial), is commonplace in many cultures, including some in the United States. Unfortunately, research has suggested a strong link between spanking and aggressive behavior, meaning that parents who spank are likely to have more aggressive kids. It doesn’t seem to matter whether these parents are otherwise very loving with their children; the bottom line is that spanking is likely to lead to aggressive behavior.

In one of the most well-known studies on this topic, a researcher named Alfred Bandura from Stanford University showed preschoolers a video of an adult playing with an inflatable doll. In the video, the children watched as the adult sat on the doll, punched it in the nose, hit the doll on the head with a mallet, and kicked it repeatedly. After watching the video, the children were brought into a playroom with the same doll and lots of other toys. As predicted, the kids who watched the aggressive video imitated what they saw—they beat the doll with a mallet, and they punched and kicked it. What was really surprising was that the children found new and creative ways to beat up the doll, and they played more aggressively with the other toys in the room as well. In other words, children didn’t just imitate the aggressive behaviors they saw; seeing aggressive behaviors caused these kids to play more aggressively in general.

The moral of the story is that some hitting behavior is a normal part of development, and isn’t something you should take personally (although admittedly, it does hurt my feelings every time my little guy swats at my face). Toddlers often hit because they are angry or frustrated and have very few ways to express themselves. Comfort is really all you can do, even if your instinct is to get angry yourself, as affection is what is most linked to positive behaviors over time. For older kids, you can encourage them to talk about their feelings as an alternative to expressing themselves with aggression. But what’s most important is to make sure your kids don’t see you hit, and that they don’t watch violent media.

READ MORE FROM THE BABY SCIENTIST 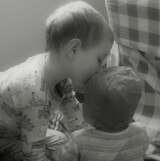