The Spirit of Women by Rebecca Campbell 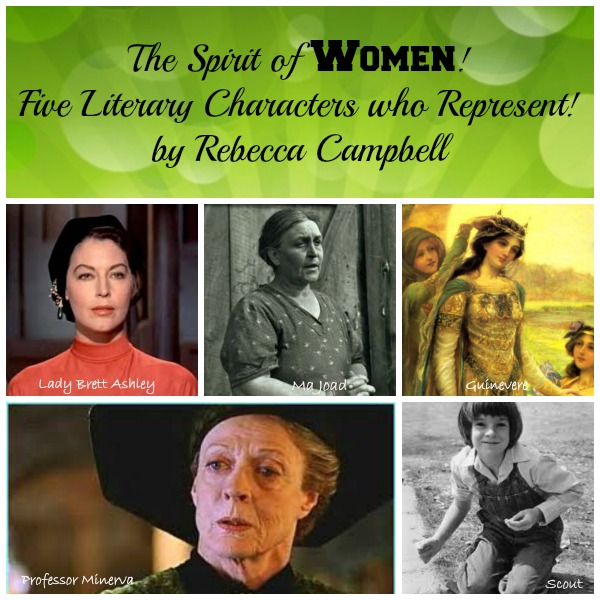 Defining a strong literary character is a daunting task; defining a strong female literary character I found almost impossible.  After starting and stopping then deleting and rewriting, I felt like my students when I give them a writing assignment (and they did not do the readings).  I was torn between classic women in literature and modern day women.  Then after an absurd text from my sister, “don’t over think it.” (I will admit, I wanted to scream – don’t over think it she says!) I thought about the women I would want to have a drink with – Queen Elizabeth I is up there, but she’s not very literary.  I thought about who I would like to have my back in a fight.  I thought about who would I be lucky enough to have in my life as a friend.  Then I decided I would just start writing.  With that in mind, I hope you enjoy the women on my list…

Lady Brett Ashley in Ernest Hemingway’s The Sun Also Rises – I am a self-professed lover of Hemingway. Brett is a little bit of everything…she earns the title of Lady from her ex-husband, she gallivants around Paris with whomever she pleases.  Hemingway describes her as, “Damn good-looking.”   Brett manages to embody what every woman wants in some way – she is clever, she is intelligent, she knows who she is and is not ashamed by it.

Professor Minerva McGonagall in J.K. Rowling’s Harry Potter series – Yes, I did it. Professor McGonagall is snarky, sassy and sarcastic.  She is also extremely powerful – and a witch, which helps a lot. Oh, and she can turn into a cat. She cares deeply for her students but does not let them take advantage; she attempts to keep Harry out of trouble.  As a teacher, I relate to her. She’s just cool.

Guinevere in Sir Thomas Malory’s Le Morte d’Arthur  – I included her because, well, she is pretty far from being perfect – King Arthur and Lancelot love triangle is generally what she is most known – and vilified for. However, Malory does show her redemption and attempts at salvation.  She loves truly.  She loves deeply.  She loves passionately. She’s also jealous and challenging.  Yet, in Malory’s version, her death is holy.  Elizabeth she is not but she does try to maintain the Round Table. She also has two men passionately in love with her – who wouldn’t want that?

Ma Joad in John Steinbeck’s The Grapes of Wrath  – The Dust Bowl is not a particularly cheery time in American history and The Grapes of Wrath is not a particularly cheery book. However, Ma Joad exemplifies a strong motherly figure in a family that is going through the worst time in their lives.  She is stronger than her husband and is calm and manages to keep her emotions in check. She keeps her fear in check. She is smart.  She understands each individual family members’ burdens and treats them accordingly. Ma helps others even when they can barely put food in their own mouths.  Overall, she shows us the true strength of a mother faced with extreme circumstances.

Jean Louise “Scout” Finch in Harper Lee’s To Kill a Mockingbird – A jet-setter, a teacher, a lover, a mother and I end my list with a child.  Not only is she a child, she is a young child – six years old when the novel starts. She defies the norms of a little girl, as she is a tomboy who has no problem voicing her opinion – to anyone – loudly. However, because of her father, she is still respectful, insightful and generous. She is also a fighter and a rebel. Through Scout, Harper Lee conveys to us what we all hope our little girls will be.

After all of my difficulties, I tried to embody the spirit of all women and what we all are – friends, mothers, teachers, lovers and children.  Happy reading!

Rebecca Campbell has her MA in Secondary Teaching from NYU and BA in English Literature from the University of Maryland.  She is a New York, New Jersey and Maryland certified secondary English education teacher. Rebecca has been teaching college-level English since 2009 and hopes to enhance her students understanding of literature and works to develop and maintain a high standard of excellence in their writing.