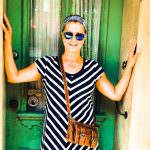 I know how difficult it is. My years of parenting are laden with mistakes and omissions. I left a trail of tears (mine, theirs) during the formative years, but since they are grown and have turned into decent people, I think I can safely say we also did a few things right along the way. I’ve taken some time to reflect upon the sorts of things we managed to teach them. We were/are by no means perfect parents. This list merely represents some of the stuff I think we did right, and some of the stuff, (if I were to go back in time), I wish we did right.

Teach them how to tie their shoes as early as possible.

Don’t buy Velcro shoes and don’t buy shoes that are easy to slip on. Make your child learn to tie his own shoes. It’s his first step toward independence. And, yes, it’s an accomplishment.

Teach your child how to ride a bike.

There is no better thing to see than the look of pure delight on your child’s face when she pedals her ass off and learns to ride a bike for the very first time. What you are seeing is her feeling of empowerment and confidence, and try as you may, you will never, ever, be able to buy her that.

Teach them how to whistle.

It’s fun. And along those lines, show them how to throw a baseball and how to shoot a basket. Teach them to swim, and dive, and jump off the end of a dock. Get them up and away from being inside the house all the time. Spending time together is what is important. Make the time. Vitamin D comes from the sun, not milk, and it’s good for parents and children alike.

Teach them to foster a true friendship with their pet.

When you care about your pets, it’s easy to take care of them. Really make them do the work – whether it’s walks, or feeding, or cleaning up after them. This is what bonding is all about. It’s about cleaning up shit, picking up chewed family heirlooms, feeding them, and getting them out. It’s about putting the needs of another being first. Caring for a pet opens the gate to compassion.

Teach them that they can count on you for the big stuff.

You’ll be at their graduations, their games, their events. You will cheer them on, and make them feel important, but do miss some things. It’s just as important for you to teach them that they are not the center of the universe and that your happiness in life is not solely riding on their successes.

Teach them to develop their own interests.

If your child likes to paint, don’t sign him up for baseball unless he likes that too. If you want to play the piano, then YOU should sign up for piano lessons. It’s a fairly easy idea to grasp, but often difficult to implement. Also, along that line of thinking, teach them not to quit. If they don’t like an activity make them ride it out. They don’t have to sign up ever again, but they must give it a fair shake.

Teach them to look under rocks.

Encourage curiosity in all forms and prompt them to ask questions. Answer them, and when you don’t have the answer, make a big production of going to the library and looking it up in an actual book, or just do it on the computer. Unless it’s about sex. If it’s about sex, change all the passwords and don’t look it up on the computer. Put the computer in the kitchen.

Teach them to do chores with or without an allowance.

Do they live in your house? Put them to work. In most cases, work ethic is instilled, not innate. If it’s expected early on, it will happen later on.

Teach them to speak in front of a group.

Have them say a prayer at the table, or make a short little toast. No one ever wants to do this, and it never gets easier. But, if they have done it before, some of the hesitation and “stage fright” dissolves as they become adults and may be called upon to speak on occasion.

Teach them to wash, fold and dry their own laundry.

Teach them that it’s more than okay to toss a load of dirty clothes into the washer, even if the clothes are not theirs. This is a major concept and it could take years and years to witness in action, but it eventually happens. And when it does, the hallelujah chorus comes out from behind a curtain to sing the roof right off your house. Yes, there are tambourines and a full horn section.

Teach your child to give something away.

Make him clean his room and when he does, have him sort his stuff into 3 piles: Keep, donate, toss. This is how you give him the tools to become a real person who values stuff but is not attached to it.

Teach him how to NOT become a hoarder.

Make him watch that show, Hoarding: Buried Alive, just to be sure he knows that his room is not so far off from what he sees on TV. Sometimes self-respect comes from just keeping your space clean and neat most of the time.

And on that note, teach kids to be in charge of their own stuff.

Don’t find her sneakers for her, or put her homework into her backpack. She’s in charge of that, not you. If it’s time to leave for soccer practice and she can’t find her shin guards, help her, of course, by telling her where to look, but don’t find them or get them for her. If she is late, she is late. Remember, the soccer game is about her, not you. If it’s important to her, she will know where she put her shin guards.

Teach them to fight their own battles.

If they’re having trouble with friends give them some strategies for working it out, but do try to let them work it out. You don’t need to call other parents and get everyone involved. Bullies (eventually) don’t retain a lot of friends. They peak in high school only to spend the rest of their days tapping beers and collecting tips. This happens while your “late bloomer” child graduates from college, wins awards at work, and spends her holidays “back home” so her dear mother can make her favorite waffles and spend time with her beautiful grandchildren.

Teach them to advocate for themselves when it’s important.

Most of life is about negotiation. If they are not happy with their grade on a paper, of if they feel that they are being treated unfairly, teach them the right way of sticking up for themselves – respectfully. By respectfully, what I mean to say is teach them to listen and respond intelligently without a sense of entitlement.

Teach them to take risks, but to be a little bit afraid.

For example, what I mean is: it’s okay to let your kid wander the neighborhood or ride his bike to a friends’ house several miles away, but he should be made fully aware of his surroundings, road safety, and the some of the dangers involved. He should check in, be home at the time you set without fail, and if he is not, this privilege should be revoked.

This sets the tone for later risks (they are inevitable). For example, your 17-year-old is at a party drinking (trust me, this will happen), and while not inebriated, he still understands that it is NOT okay to get into his car to drive home. He texts you to say that he is sleeping over and you read between the lines and decide that even though you will not fall back to sleep because you envision him passed out with throw up on his neck, you are fine with that choice. While the drinking isn’t condoned, he is at least making the right decision about driving. He also checked in with you. That is taking a risk, but still having some fear regarding consequences – enough fear to stay safe.

And out of everything you will teach them, or try to teach them, they will probably remember the following two things only: They did not always get whatever they wanted when they were growing up, but you somehow managed to give them exactly what they needed.

Kimberly Valzania practices mindful gratefulness. She is creatively driven to write about and share her personal experience and opinion on weight loss, fitness, life changes, adventures in parenting, day-to-day triumphs (and failures), and the truth-seeking struggle of simply being human. As words tumble out, they are sorted into cohesive piles and delivered via poetry and short essays. She believes that life is indeed a mysterious journey, filled with delightful surprises and plenty of time for reflection and change. Her main goal on Earth is to live with an open heart. She has witnessed precious moments appear (like magic) when she simply reaches out her hand. Her articles are featured on Rebelle Society, The Elephant Journal, The Minds Journal, The Manifest-Station, and Imperfect Parent. Read more at her website.
Next Article