I Want My Daughters to Take Up Space 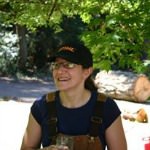 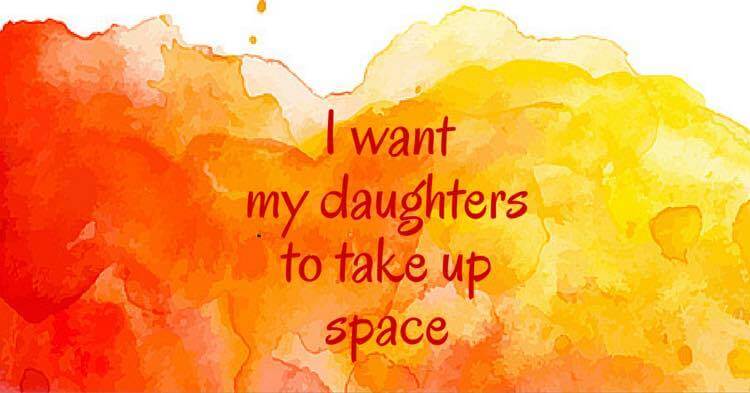 I want my daughters to take up space.

A few months ago I responded to a call in a retirement community. The caller was a 90-year-old woman. She was strong. She was sturdy – one of the best compliments I think I can give someone in their 90s. She had a bad shoulder, and when she had slipped getting out of bed that morning she found herself on the ground and unable to stand back up because of that old injury.

As soon as we walked into her bedroom door she started to apologize. Profusely. Repeatedly. I told her what I tell all of our patients who apologize so: this is my job. I chose to be here, helping you, thank you for letting me. My partner and I gingerly lifted her to her feet. She showed us she was steady on them and could walk a few laps as required. This lady didn’t even need a walker at 90 years old!

I asked her if there was anything else we could do for her before we went along our way. Sheepishly, she said yes. She cooks for herself and she shops for herself and she takes herself to her appointments and her social engagements, but the bane of her daily life, she told me, is getting her bra on every morning with that bad shoulder.

I asked her if she would like some help with that before we left and my partner obligingly stepped outside of the bedroom door to give her some privacy and turned his back. He was listening should we require assistance, but allowing her the privacy many of us prefer when we are about to rearrange our primary sexual characteristics into our clothing.

And here is where that thing happened that stuck with me. Mind you, Picking people up off the floor is bread-and-butter part of our job. If you don’t get satisfaction out of being a helper, you shouldn’t do emergency medical service work. The life-saving glory calls, while they do happen, are few and far between and if they are what sustains you, you will starve and burn out quickly in this job. But as usual, I digress … A different soapbox for a different time!

As I helped her get her nightgown over her head so she didn’t have to flex her sore shoulder, she apologized again. This time, even at the age of 90, she apologized for being fat. As though she did not have a right to occupy physical space in her own home.

It hit me right then –  I have transported and assisted more men than I can count who weighed more than 400 pounds sometimes 500 or 600, a couple of times over 700. I can recall one male patient who apologized, as he watched our crew strain to lift his 770lbs. And yet I can recall so many apologetic women–a chorus of soft voices and ashamed faces, apologizing for being women-of-a-certain-size, taking up more than their allotted 128 pounds, sorry for how hard it must be to lift them up. For having their thighs touch the side rails on our stretcher. For having breasts that I had to push up and out of the way to apply my 12 lead electrodes. “Seriously,” I want to tell them, “I do Crossfit. Your boobs aren’t that heavy!”

So as my patient apologized to me for the inches of her waist and the heaviness of her breasts and the jiggle of her arms, I thought of all the ways that we humans socialized as females are taught to take up less.

Don’t be too right.

Don’t firmly state your opinion, instead precede it with an apology and a deferential “this is just something I’ve been thinking,” lest in a moment of being strong and deft of mind we be renamed Bitch.

Don’t show too strong an emotion, for fear of labels like “crazy”, or – gasp – “hysterical”, a condition named after what is apparently our defining organ??

Always compliment each other if we have succeeded in shrinking. And politely pretend not to notice when we have increased in size.

So as I helped her lift her heavy breasts and tuck them into her bra I wondered, if at 90, we can’t take up space without apologizing, then when can we?

I am not saying that I want my daughters to be a particular size. I am not saying that they need to be tall, or lift weights, or be deft with a chainsaw. What I am saying is that I don’t want them trapped in their mind constantly apologizing for the space they take up. With their voices. With their bodies. With their creative and independent thinking. I never want them to have to apologize for their quick bright minds, to feel compelled to make themselves less than, so others can feel more.

I want them to stand up straight no matter their height. Walk with their shoulders set wide and relaxed. To never, ever, ever apologize for the circumference of their thighs or the size of their feet. To sit comfortably in their own skin, and their own emotions and their own intellect until they come full circle on the path to wisdom and learn to sit comfortably with their own ignorance. Because that is where our big learning can begin, and we cannot get there until we are free from the vicious cycle of thinking that our value is inversely proportional to our physical volume.

I can’t give my daughters this gift by wishing. They have their own paths to walk and demons to fight. But I can do my part by embracing my self-loathing – by acknowledging it, and hugging it and setting it free. I chose to take my most hated body part and decorate it. A colorful, bright, complicated tattoo now draws attention towards my skin from my left knee to my left hip. This, on a body that used to be covered and hidden as though the Sin of Cellulite meant my thighs were unworthy of the blessings of summer sunlight and warm breezes.

I also know I cannot wrestle this demon alone, as it is a many-headed beast and I am but one brave soul. For my part, I will clearly state my actual body weight – every single one of my 175 pounds; I will claim as my own without shame. I will finish the last of the color on my tattooed thigh and stop saying things like, “Nobody should have to see that” when it is hot out and I want to wear shorts.

And when the self-loathing-body-shaming-energy-sucking thoughts arrive, I will hug them with my mind, and acknowledge them with empathy and see that although they sometimes flow through me, they are not me, and I will let them go.

To my many Sisters out there, quietly fighting this same fight: Thank you. Though our battles may be most often fought alone, it is all part of the same war. And I’ve got your back, even when you think you are fighting alone, or worse, fighting yourself.

What Your Profile Picture Says About You

Holly VanSchaick is a mother-of-several as well as a paramedic in the Pacific Northwest. Now and then she is also a writer of thoughts she needs to get out when there is no one around to listen. She only recently became aware that anyone else might like to read them!
Next Article