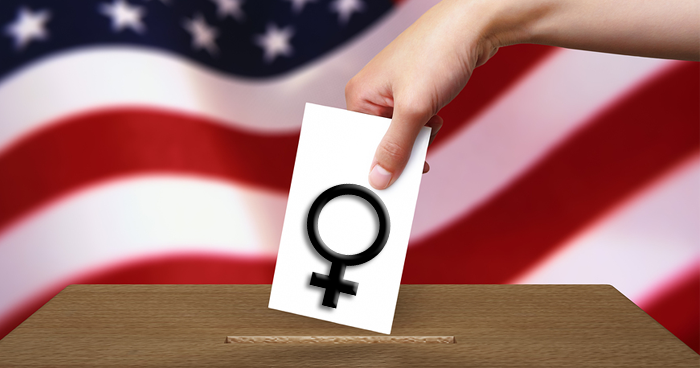 I took my son to the Hall of Presidents at Disney World this past fall. We both enjoyed hearing the program narrated by Morgan Freeman (or the “guy from the Lego Movie” if you’re my 7-year-old) and the display of “robot presidents” on the stage. As I sat and looked at the lineup before us, I realized that the dark skin of the Obama figure, that one stark difference, served only to highlight the white, male sameness of the rest of the leaders arranged behind him. I felt, during that moment, gratitude that at last children of color could see a face more like theirs on that stage. But I wanted – oh, how I wanted – to see a face more like mine there, too.

I’ve always held onto to hope that a woman would be president in my lifetime, but it wasn’t the ache, the need to see a woman in the Oval  Office that I feel now. Perhaps the new urgency stems from turning the corner into my 40s and knowing, full well, what I, and other women, are capable of once the blush of the first 35 years has passed and we enter the gateway of the Constitutionally approved Age of Executive Eligibility.

Perhaps it’s being the mother of a daughter and the responsibility I feel to show her a full range of possibilities for her future. Perhaps it was the election and re-election of Barack Obama and the sight of him and Michelle standing at the White House in a way that says,“The old ways are old. The new ways are yet to be defined. We will lead the US into the new ways for now. It’s up to you, women, gay people, trans people, and people of color to keep marching forward through these doors we have cracked open for you.” Perhaps the election of a Black man has made the election of a woman so tangibly possible that I want it in a way I never wanted it before.

Now, I want a woman president.

I want this in a visceral way.

I want the Oval Office to hold the things contained in a woman’s mind.

I want a president who knows what it’s like to frantically clean period stains off an irreplaceable garment because she will know how irrevocable the shedding of blood really is.

I want a president who has thrilled with the combination of fear and joy while thinking “what if I’m pregnant?” because she will know immediacy of weighted responsibility landing on her shoulders, inescapable and real.

I want a president who has walked into a room full of men and evaluated not only how to accomplish that which she needs to accomplish, but how to walk out safely if the men in the room aren’t just men but also attackers because she will know strategy and foresight must precede force.

I want a president who has spent her life dancing backwards, in heels.

I want a president who knows that she has to work twice as hard to be seen as half as good as men and has decided to work ten times as hard in response.

Some will ask if I would accept any woman as president and cite the likes of Michelle Bachmann or Carly Fiorna and their candidacies. No. I do not want just any woman.

I want a qualified woman as president. When asked about his support of Obama in 2008, Chris Rock said, “I’m proud Barack Obama’s running for president. You know? If it was Flavor Flav, would I be proud? No. I don’t support Barack Obama because he’s black. There’s a proud feeling because of the character of the man.”

I want a woman with character that makes me feel proud. I won’t support a woman just because she’s a woman if she’s unqualified, inexperienced, or holds views that are anathema to me. I have principles, after all, and won’t sacrifice those. So no, I would not accept a fringe candidate for her femaleness. But a qualified woman? A woman with a track record of leadership and success? That is the golden ticket.

Those women are out there. One of those women is running for my party’s nomination right now. She’s running against some men who are similarly qualified, a few of whom already have my deep admiration, but I won’t vote for them. I might if there weren’t an equally qualified woman in the mix because I see presidential potential among the men. But no. Not this time. Not this election.

I want a woman president.

ABOUT REBEKAH: Rebekah Kuschmider is a DC area writer with a background in non-profit management and advocacy. Her work has been seen at Babble, Scary Mommy, Huffington Post, Yahoo Shine, Redbook online, and The Broad Side. She is the creator of the blog Stay at Home Pundit and is a contributor to the upcoming book Love Her, Love Her Not: The Hillary Paradox

This post was written exclusively for BonBon Break Media, LLC