Some Toads and a Boy: A Love Story by Funny Is Family 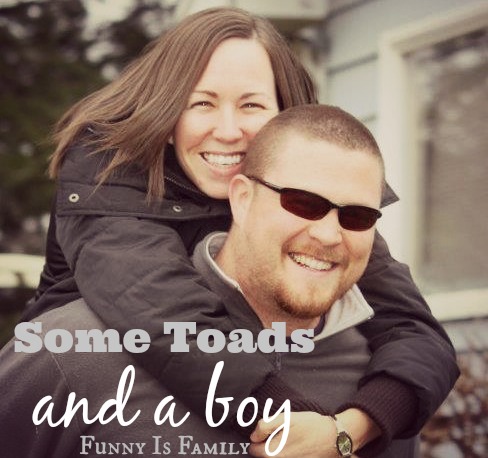 Once upon a time, there was a girl. Not a princess, just a girl. It’s a good thing this girl wasn’t born into royalty, as her manners were lacking, her demeanor incredibly unrefined, and most importantly, she hated wearing dresses. No one would mistake this girl for a princess, but she did kiss some toads.

There were other toads, too. Come read about the girl’s journey through the land of ridiculous relationships that finally led her to a boy. This is a love story, I promise.

ABOUT AMY:  Amy and her husband made two kids, a four-year-old girl and a six-year-old boy. She does not consider herself a housewife, as she owns no pearls and only one apron. Amy is a Huffington Post blogger, has been featured on BlogHer, Aiming Low, Mamapedia, Bonbon Break, Scary Mommy, and In The Powder Room, and is a contributor to the books, “You Have Lipstick on Your Teeth,” and I Just Want to Pee Alone. She writes for her local newspaper and was named one of Mashable’s 17 Funny Moms on Twitter. You can find Amy laughing at the absurdity of parenting on Facebook, Twitter, and Google+, and pinning her popular Crock Pot Thursday recipes on Pinterest. She writes embarrassing stories about her family and herself at FunnyIsFamily.com.