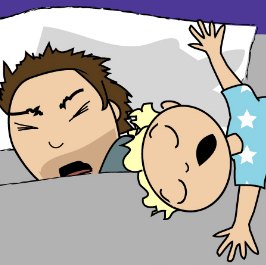 Buy this design on a mug!

This is the story of Norine’s bedtime life. She let her son creep into her bed when he was a toddler, and now he sleeps soundly — horizontally! — while she and her husband cling to the edges of the mattress like ancient cliff-dwellers.