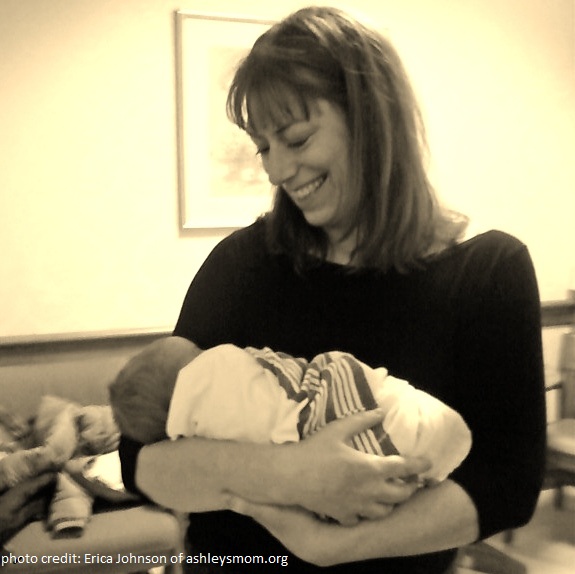 The Language of Family

I need a new word. I love the English language. I love that it contains the words “sternutation,” meaning “the act or sound of sneezing,” and “philtrum,” for the little groove above a person’s lip, and countless others, both useful and amusing. But there is one area in which our language has been letting me down lately, and that’s the area of family.

For you see, my family is a little bit different from some others in that it is stitched together with two threads: biology and adoption. The picture below reveals a lot. It shows me welcoming the newest member of our family, and as you can see, I could not be happier. But here’s the thing: there is no word that names my relationship to the child in my arms. He is my daughter’s brother, but he is not my son.

When my husband and I began the process of adopting our daughter Ashley from foster care, we could not have imagined how intricately intertwined our lives would become with her biological family. Then we met Erica, Ashley’s biological mother. Though she had previously lost custody of her older children, including Ashley, as a result of her struggles with addiction and other issues, by the time we came into her life she had made a dramatic turnaround. She was not only in recovery herself, but was also working with other moms in recovery, helping guide them on their own paths to healing and stability. She was also successfully parenting her toddler son Tyler.

The more we got to know Erica, the more we came to love her. We started with a limited open-adoption contract that guaranteed her the right to one visit a year, but soon realized that we wanted to do visits on a more frequent basis. Over time, we became a family. So, naturally, when Erica gave birth to her youngest son Tanner, Ashley and I were thrilled to visit her in the hospital. It was a joyful occasion. As Erica said of this photo, “What I loved the most about it when I first saw it, was I really could feel your joy; it reminded me of my joy, when I held him for the first time!”

In these modern times, adoption isn’t the only place where traditional family labels fall short. What, for example, do you call the mother of your brother’s daughter when she is not his wife? Or your ex-mother-in-law when she has remained an integral part of your life though your ex has not? Ultimately, we don’t need words to tell us that such people are family.  Maybe someday the language of our tongues will catch up with the language of our hearts.

About Rebecca: Rebecca Hawkes is an adoptee and an adoptive mother who writes about family from both points of view on her blog Love Is Not a Pie. She adopted her daughter Ashley from foster care and has developed a surprisingly close relationship with Ashley’s original mother. Together, they have founded Ashley’s Moms , an organization focused on supporting families and encouraging open-adoption relationships that benefit the adopted child. Follow Rebecca’s experiences on Facebook & Twitter.