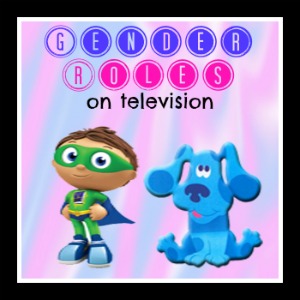 What do we want for our children?

Especially as an Executive Producer in the field of children’s television, I am uber aware of the influence that media has on all of us, including my daughters.

What they see and hear truly affects their view of the world.  I give careful thought to even the smallest details in my shows – what the characters eat, how they feel, what they do, which character traits go with which character, and whether or not they should be boys or girls. It’s important to me that we don’t show our characters eating sugary snacks and cakes for a “special occasion” because, truth be told, it’s always a special occasion on a television show. In addition, one study found that:

98 percent of food ads seen by children on top-rated shows were for junk food.

But when I look at media, as a whole, for my own two daughters, I worry. As much as I can talk with them and model for them the type of women I would like them to grow up to be, I find that in media, women are still typecast in traditional roles, while men are portrayed as the more dominant figures. Women are stereotypically represented as dependent and emotional. Women are the mothers, and men are the bread winners. Women are under represented in television about 3:1.

“The fact that a majority of voice-overs on television are male, that there are more male news readers on television and that many of the major film directors are men indicates that it is the male who has the authority and the control of the world of television.”(Elena Beasley)

We know there are no limits to what our children can do. So why are we feeding our children the idea of limits in the form of media?

And what can we do about it?

And I’ll do my part by continuing to write strong, smart female characters that create their own destinies!

Angela Santomero is the Lead Creator, Executive Producer and Head Writer for Nick Jr.’s landmark preschool show Blue’s Clues. Malcolm Gladwell referred to it as “One of the stickiest TV shows EVER made” in his book, The Tipping Point. Her ability to integrate education, entertainment & active participation helped make Blue’s Clues a breakthrough program. Currently, Angela is the Creator, Executive Producer & Head Writer of the Emmy-nominated and #1 ranked preschool show, Super Why!, which helps build literacy skills through fractured fairytales & interactive games. She recently unveiled her latest, (the Mister Rogers’ spin off) Daniel Tiger’s Neighborhood this week. She presently hosts PBS’ The Parent Show at PBSparents.org.

This original post was written for Bonbon Break Media, LLC