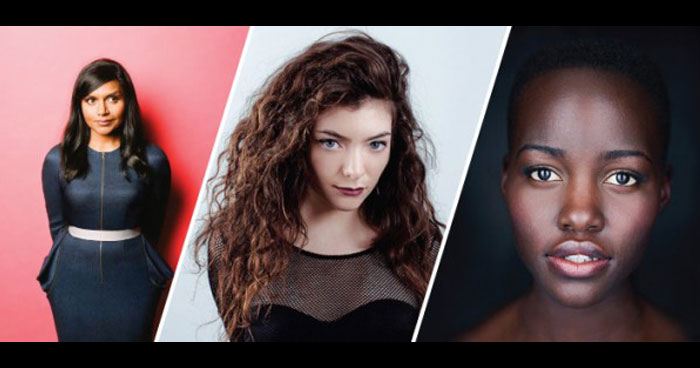 Turning to celebs to look for role models is a tricky business, especially when it comes to admiring their appearance. For many actresses, athletes, and artists, keeping their bodies slim or muscular is part of their job. Plus they have personal trainers, private chefs, stylists, and makeup artists to keep them looking camera-ready whenever they’re in the public eye.

But whether we like it or not, kids and teens look to celebrities for inspiration on how to look, act, speak, and more (and even if they’re not in kid-targeted media, kids see these folks on magazine covers, music videos, and more). Their inspiring stories, personal triumphs, self-acceptance, and decisions to speak out against the industry’s standard of beauty and size has us sitting up and taking notice — and we hope this is a trend we see more of.

Adele, singer
The incredibly talented and award-winning singer and songwriter isn’t skinny. And although we’ve seen other famous folks start out plump and then slim down as their fame grew, Adele seems perfectly comfortable in her skin and shows no sign of changing her looks. In fact, when fashion designer Karl Lagerfeld made a disparaging comment about Adele’s weight, she shot back with, “I’ve never wanted to look like models on the cover of magazines. I represent the majority of women and I’m very proud of that.” This cemented her place in the positive-body-image role model pantheon.

Lupita Nyong’o, Oscar-award-winning actress
She had a small but powerful role in 12 Years a Slave, but it was her starring role on the red carpet in 2014 that made Nyong’o a star. She became a fashion darling in the world of Hollywood, where dark skin like hers is rarely celebrated. Her speech at the Essence Black Women in Hollywood Luncheon about learning to love the color of her skin is inspiring for all.

Lorde, singer
The teenage singer/songwriter made a splash with the hit single “Royals,” but she has also fired back at the publicity machine that aims to make her picture-perfect, like in this tweet about her acne being Photoshopped out of a picture.

Terry Crews, actor and athlete
He plays macho characters, and he’s certainly in top physical shape, but Crews also is one of the few celebrity men to challenge stereotypes about masculinity. He wrote a book about manhood and identifies proudly as a feminist.

Lena Dunham, actress, producer, author
Creator of the hit HBO series Girls, Dunham initially got lots of press for being naked on-screen … a lot. Although the press focused on her not-thin figure, Dunham refused to be shamed into covering up. She remains one of the few female TV leads who isn’t super skinny.

Mindy Kaling, actress, producer, author
Speaking of TV stars who are writing and producing their own material, Kaling also breaks the mold by being larger than the average (underweight) TV star and not letting that stop her from being dressed flawlessly, writing romantic story lines for herself, and speaking out against the pressure to slim down.

Prince Fielder, athlete
The Texas Ranger posed naked on the cover of ESPN, inciting criticism from folks uncomfortable with his rounded body. He showed courage by stripping down and announcing: “Just because you’re big doesn’t mean you can’t be an athlete.”

Although massively popular talk-show host and comedian Ellen DeGeneres is an example of positive self-image and being yourself despite pressures to conform, she has also been outspoken against companies and people who are prejudiced against people for their size.

Misty Copeland, ballet dancer
For those outside the ballet world, Copeland was an unknown until her Under Armour commercial, which was viewed more than 4.2 million times after its release in July 2014. Since then, her powerful dancing, muscular physique, and story of breaking barriers in the elite world of professional dance has made her stand out.

Melissa McCarthy, actress
The comedian is famous for her physical humor — traditionally the territory of the large actor or actress — but she defies the stereotype by being incredibly funny and standing up to mean comments about her weight by taking the high road.

Amy Poehler, comedian, actress, producer
Aside from her great work as a smart, self-assured leader on Parks and Recreation, Poehler also collaborates on a project called Smart Girls, answering reader questions about topics ranging from finding courage to feeling good about your body.

Gabourey Sidibe, actress
The star of Precious has gone on to roles in American Horror Story and Empire. Simply her presence on TV and the red carpet is a statement that full-figured ladies deserve to be seen and heard. Her comments on her appearance are inspiring. “If they hadn’t told me I was ugly, I never would have searched for my beauty. And if they hadn’t tried to break me down, I wouldn’t know that I’m unbreakable,” Sidibe said at the Gloria Awards and Gala, hosted by the Ms. Foundation for Women.

Meghan Trainor, singer
Though she’s new to the celebrity scene, Trainor’s debut song, “All About That Bass,” means she’s a spokesperson for loving the body your mama gave you. (Although we know she’s not “bringing booty back” all by herself. That honor goes to J-Lo, Beyonce, Kim Kardashian, and Nicki Minaj, thankyouverymuch.)

7 Media Resolutions Every Family Should Make in 2017