The Sexualization of Our Daughters 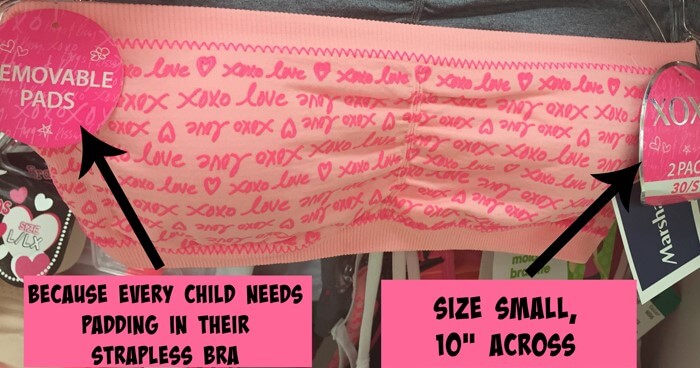 While trying to find a pair of shorts for my daughter that didn’t show her vagina, because apparently nine-year-olds can only wear a 1″ inseam, my eyes locked on the sports bras on display. I had to investigate, especially since I just asked about purchasing one for said child. Apparently ALL the girls at gymnastics have a sports bra, and she wants one too.

I remember trying to muster the courage to ask my mother for deodorant in sixth grade and her reaction. I knew not to behave similarly, but my mind was like WHAT?! You are too young for a sports bra! Here, look! Adorable undershirts for the win! However, I know it is a battle not worth fighting since a majority of girls have their minds on the same thing my mind was at a certain age. Thanks to our girls being inundated with mature topics it seems this is happening earlier and earlier.

I perused the bra section with casual interest. I had just paid $20 for a sports bra for her at another retailer (she slid it into my pile at checkout and I opted to not make a scene in front of her brother –  well played, child of mine), and had zero intention of doing that again. I noticed an alarming trend – bras with padding, lace, and embellishments.

Behold the sexualization of children.

The Mullet Bra, business in the front, party in the back. Where is the cute Hello Kitty undershirt? WHY must a child have a sports bra with LACE? The front was fine, more than appropriate, but the back? Uh no, they can take their Mullet Bra and shove it. As humorous as the Mullet Bra is, this really is no laughing matter. I cringe at the idea of my daughter moving to more adult styles. There was no lace in my closet until I was older, much older. I believe I was married when it made its first appearance.
The underwear of my early years has morphed into a more advanced article of clothing. There is now padding in those bras. Padded bras should only come in Large (10-12) and XL (14-16), there is no need for a bra-sized to fit a first grader to have padding. A popular retailer’s website has a padded bra available in a size small – that is a size 6 – 6x range! Sure, they are removable pads, but why the hell are there pads in the first place in a size S? That’s second grade!
Then there is the strapless padded bra, the double whammy. Apparently, every young girl who has no boobs (thus the padding) but needs a bra, should have the option to have a strapless bra as well. I can’t even fathom the reason behind this number. What child is wearing a strapless top at 7 years old? When my daughter was 7, she was running, playing, jumping, doing cartwheels, bicycling, and so on. Clothing sans straps would be a waste of money for her then, and still now as an almost ten-year-old. As an almost-40 year old, I don’t want to wear a strapless bra, why would a child?
I propose we unite and ask manufacturers to make bras sized Small and XS with more material so there is no show, ensuring modesty, removing the need for any padding. Let’s lose the Mullet Bras and stick with age-appropriate non-sexualized undergarments for our young daughters. And how about we ditch the strapless padded bras all together? Maybe the 1960s were onto something with burning bras because I am about to burn them in the fire pit – at least they would have a use.

This post was exclusively for BonBon Break Media, LLC.