A Teachable Moment About “Gay” by Naptime Writing 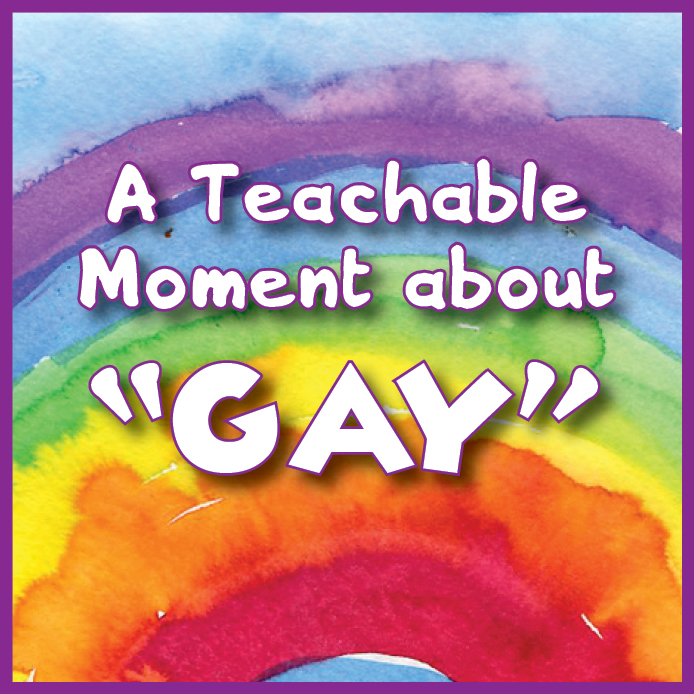 “Will you please meet me after school with your child,” began a voicemail message from  my seven-year-old’s teacher, “because he has been acting out today in ways that are just not like him. There were a few incidents in the classroom, and then he was calling kids names, including calling someone gay.”

Needle across the record: He WHAT?

We are a relatively progressive family. We talk openly about equality and tolerance and people being accepted for who they are. Heck, today, when I couldn’t find shoes to match my pants, he sighed and told me, in his most bored pre-pre-teen voice, “It doesn’t matter what you look like, Mom. It matters how you treat people.”

So when I heard that my son had teased other kids, including calling someone gay, I prepared to give an epic lecture.

I pulled out one of our favorite family mantras, “We will not try to gain power by making others feel bad about who they are,” and marched to my child’s school with this righteous banner held aloft.

The doors swung open and I prepared for an epic lecture on historical power and repression with…my small, tired, slumping little guy with the too-big backpack and the bedraggled hair.

Oh, pumpkin. I think I’m doing this wrong. This isn’t a battle. This is a talk about kindness.

I climbed off my high horse and sat in a tiny chair at a tiny desk so I could listen to my sweet, sensitive, wonderful little guy.

Teacher: I was at the sink when I heard voices saying, “Quinn is gay. Quinn is gay.” When I turned around, Peanut here was one of the kids saying it.

Me: Why did you say that Quinn is gay?

M: What makes you say that?

M: I see. Um…what do you think gay means?

M: Oh. Well, gay is when a grownup wants to start a family with someone of the same gender. So our friends Maria and Kim are gay, Jim and Nick are gay, and Grace and Laura are gay.

P: Oh. [beat] But Grace and Laura don’t have kids.

Me: Right. If you did say that, Quinn would think there might be something wrong with being blond, but he can’t change that. And if you say that he’s gay, he might think there’s something wrong with being gay. And all the people around you in class start to wonder if blond or gay are bad things for them to be. So calling someone blond or gay might not hurt their feelings, but it might teach other people to feel bad about being blond or gay or tall or thin or whatever the tease is. Gay isn’t who someone is. It’s part of them. Like their hair. Brown or blond or gay doesn’t change, so teasing about those things is making someone feel bad. It’s never okay to do something to make someone feel bad.

M: May I also point out, really, that the things Jason tells you usually aren’t true. He told you girls aren’t allowed to play soccer. He told you that boys should like dogs because girls like cats. He told you “every single person in Mexico, even the old people and babies have machine guns.” None of those things is true. In fact, they’re pretty ludicrous. So I’d do some serious fact checking before I believed anything Jason said if I were you.

We left the whole discussion at the door. I didn’t bring it up again, which took a lot of restraint. I still had many, many words I wanted to use. But I have to let the poor child breathe.

And I have to breathe, too. I don’t think he was trying to hurt Quinn or to cement hatred against the LGBT community. I think he was trying out a new word. And I think my son just learned that some words are simply unacceptable. I still remember my mom walking me through a whole list of racial slurs I may not ever use, including definitions and an explanation of how horribly each group had suffered under that epithet. Looking back as a parent, I wonder if she unleashed that lecture because I had used one of those names. Or someone said one to me.

So can I maybe relax and realize this is just a rite of passage, just the first step in a long series of conversations about how words have power, and how some people use powerful words to bully other people. A long, evolving conversation about finding your own power rather than taking it from others by devaluing them.

I take really seriously…perhaps too seriously…okay, definitely too seriously…my job of raising people who make the world a better place. I really hope my sons and their peers grow up knowing there’s more to people than their skin color or sexual orientation or gender. Allowing people to be more than the single words we use as labels builds the holy grail of attributes: kindness. Thankfully, that one comes from nurture.

Or lecture. I’m not sure which, nurture or lecture, but I’m going to try both.

ABOUT CHRISTINE: Christine Harkin is a corporate writer, editor, and brand namer who has been enjoying building her secret cache of blog friends since 2008 at NaptimeWriting. You can follow Naptime Writing on Twitter and at naptimewriting.com, and find Christine’s professional side on Twitter, LinkedIn, and Editor, Please.