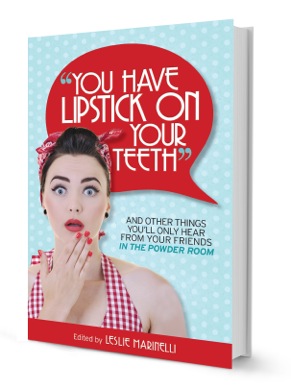 I suspect it’s because I Just Want to Pee Alone.

No, not me. My kids are all at school; I pee alone all day long.

I’m talking about the book, “I Just Want to Pee Alone

“—the smash indie hit that demonstrated beyond the shadow of a doubt earlier this year that you don’t have to be backed by one of the “big six” to make a big impact in the publishing world. In fact, that book was a huge inspiration to me last spring when I was put in charge of creating an anthology for In The Powder Room. And based on the number of other anthologies coming out this fall, I’m guessing I wasn’t the only one inspired by Jen of People I Want to Punch in the Throat and her “I Just Want to Pee Alone” team.

Now, six months later, I’m proud to report that In The Powder Room’s premiere humor anthology, “You Have Lipstick on Your Teeth,” has been consistently rocking the Amazon charts as its #1 Hot New Release since our launch nearly three weeks ago. That has definitely been one of the greatest thrills for me so far in this process: getting to see our book positioned on Amazon right next to some of my lifelong comedy inspirations like Tina Fey and Ellen DeGeneres.

One of the other high points has been witnessing my co-authors take so much pride in our book and come up with buzz-worthy marketing ideas. It was Kerry Rossow’s (HouseTalkN) idea for all of us to take photos of ourselves with lipstick on our teeth for our author page. And Kim Bongiorno (Let Me Start by Saying), our social media manager, started the trend of authors and readers taking selfies posed like our book cover.

But creating this anthology hasn’t been all sunshine and rainbows.

By far, the hardest part of the process was choosing which pieces made the final cut. We had such an incredible response to our call for essays that I had to turn away dozens of talented writers whom I really respect and admire. That was no fun, but we had a vision to uphold and that required making some tough business decisions.

We also grossly underestimated how much time it would take to complete this project. Admittedly, I do have a problem with time-consuming perfectionism (except when it comes to housekeeping). There was also a huge learning curve—my friends Trial and Error both slowed me down and taught me well.

The emotional highs and lows were also something I was not prepared for. I remember the day our first proof arrived and I ran out the door to greet the UPS man. It was such a huge rush of excitement until I ripped open the box and saw how the first draft of the book looked: OMG, my baby was UGLY.

I had been warned this would happen, so I only allowed myself one carton of Ben & Jerry’s while crouched in a dark closet before initiating Plan B. Our launch date would be delayed for another round of formatting, but I would not settle for an ugly baby!

One last noteworthy pitfall that I was not at all prepared for was the lack of enthusiasm with which self-published books are received by some bookstores. After attending the wonderful BlogHer panel about self-publishing last month by Lela Davidson, Jen Mann, and Robin O’Bryant, I was expecting to be received with open arms as a “local celebrity” in my small southern town. Instead what I have experienced so far feels more like I’m trying to peddle snake oil rather than a bestselling book that makes people laugh so hard they spray wine all over their Kindles.

In our case, we may be considered “self-published,” but every step of our process was skillfully completed by paid professionals: graphic designers, editors, fact-checkers, and copy editors ensured that, cover to cover, our book was the very best it could be.

So yes, it stings a little to be lumped into the same “self-published” category as that booklet of autobiographical emo love poems my goth teenage neighbor just released. But it makes for great blogging fodder. I figure every time I hear, “Self-published? Oh. I see. Well, you’re welcome to donate a copy, but we reserve the right to refuse it,” just gets me one step closer to my triumphant Pretty Woman moment when I return in a blaze of glory someday saying, “Remember me? Remember when you rejected me because I was just a lowly ‘self-published’ author? Mistake. Big mistake. HUGE.”

Hey, a girl can dream, right?

Get your own copy today…

ABOUT LESLIE: Leslie Marinelli is an award-winning humorist living in the suburbs of Atlanta with her husband and three kids. She’s a weekly columnist and the Editor-in-Chief of In The Powder Room, as well as the creative force behind the riotous blog The Bearded Iris: A Recalcitrant Wife and Mother Tells All. She is also the editor and one of the co-authors of the bestselling humor anthology, “You Have Lipstick on Your Teeth.” Connect with Leslie on Twitter @TheBeardedIris.

This piece was written exclusively by Leslie Marinelli of In the Powder Room and The Bearded Iris for Bonbon Break Media, LLC