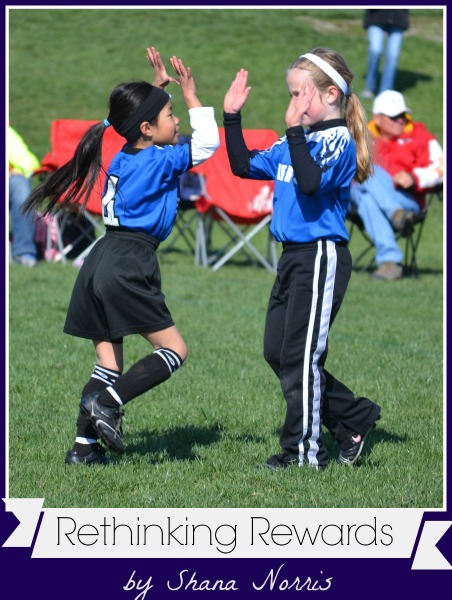 A trip to the toy department at Target, $5 bill, ice cream after the game, pizza for dinner tonight …

If you’re even slightly familiar with youth sports, I’m sure you’ve known parents who promise their kids a reward for scoring points in a game.

Maybe you’ve even done it yourself.

And that’s okay.  But let me tell you a story.

I still remember how these same kids could dominate the field when they started playing at age four.  Back then, the game was all about the individual player.  Passing the ball?  What was that?  And why in the world would anyone want to do it when a player could score goal after gratifying goal with little to no help from his teammates?

The kids who got paid $5 per goal could get rich quick, at least by preschooler standards.

But as the kids got older, that changed. Now it’s more about teamwork. It’s about learning to play a position, making good passes, and moving the ball down the field through a concerted team effort.

Last Saturday, I heard a dejected 3rd grader announce after the game that her dad had promised to buy her ice cream if she scored two goals and, since she hadn’t scored any goals, there was no ice cream in her immediate future.

Let me tell you what is wrong with this scenario.

Both her offense and defense were spot-on that day. The team lost, but barely. They kept the point spread low, and she was an important part of an impressive team effort.

But did she feel successful?

No. Because her dad had made her success based on one thing: scoring goals.

This is unproductive on so many levels.

No one scored two goals in that game.

Most of the players on her team didn’t score a goal, period.

Because this player’s coach had asked her to play at mid-field, it was pretty much guaranteed that she wasn’t going to make a goal. Scoring goals wasn’t her job that day.

She had played hard, without complaint, on a cold and rainy Saturday.  She played a good game, yet she felt like a failure, because the reward system her dad had put into place was poorly thought out and essentially irrelevant.

There’s something to be said for intrinsic versus extrinsic rewards. But that’s another vent for another day. Let’s assume a parent wants to reward his or her child, so we’re talking about extrinsic rewards here.

Instead of rewarding individual points scored in a team sport, why don’t we figure out a new and more relevant standard?

How many good passes a player made …

How he encouraged his teammates …

How she respected her coach …

How he utilized a new skill or technique …

How she kept giving 100% even when the going got tough …

Twenty years from now, it won’t matter how many goals our kids scored in a youth soccer game back when they were 8.

But the life skills they learned – working as a team to achieve a common goal, following the advice and vision of a leader, persisting through adversity – will stay with them for years to come.

So let’s reward that instead of an ultimately meaningless number on a scorecard.

ABOUT SHANNA: Shana Norris is a writer, reader, runner, coffee guzzler, and chocolate inhaler who dreams of becoming an Avett Brothers groupie. You can follow her on Google+ and on her blog at ShanaNorris.net.