What I’ve Learned: A Six Year Old Can Outwit My Husband 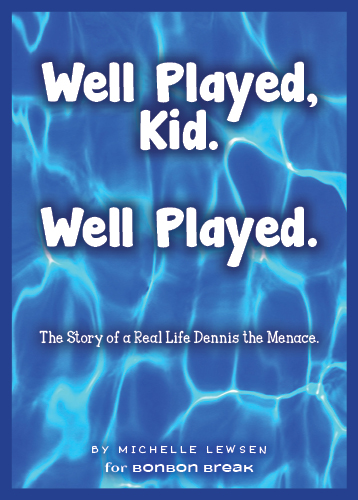 We all know the kid I’m writing about – the kid who is so full of curiosity and mischief that he pours sand in the toilet to see if it will make mud and sticks play dough up his nose just because he can. He’s the kid who you want to be angry with but can’t because he is so darn cute and there’s a difference between mischief and malice. He is mischief all over.

Today, I’m going to tell you a story about this kid. He is a friend of one of my kids and I’ve known him since he was born. I adore him – most of the reason I adore him is because of his chutzpah – the guts to get up to the kind of cheeky mischief that other kids only dream of. For the purposes of this story, we’ll call him Little D.

When Miss M was about six, we threw a swimming party for her. I have no idea what we were thinking with that idea, but invites were out before we realised that 40 six year olds in a swimming pool wasn’t the best idea we’d ever had. It was pretty easy to decide that Darren would be the in-pool lifeguard at the party (after all, I had to ensure cupcakes got eaten…) and that’s how he found himself in a pool with a few brave Dads and forty odd screaming kids.

I need to interject here that, while Darren is brilliant with kids, he really doesn’t love being surrounded by the little buggers. He’s more of a one-on-one type of guy, so his nerves were shot pretty early in the game. I’ll add too, that Little D rather enjoyed getting up to mischief at Darren’s expense (after all, watching smoke shooting out of someone’e ears is always entertaining, no?).

Picture this: twenty minutes into the swimming session (AKA forty kids splashing water up Darren’s nose and screeching in his ears), Little D decided to start a play fight with Darren. Unfortunately, he  failed to inform Darren that this was his plan. Instead, he went with a frontal ambush. To the nose. With a closed fist.

Once the little cartoon birds had stopped circling his head, Darren calmly (okay, not that calmly) explained that that wasn’t the best idea and hitting wasn’t allowed. To which Little D responded with a second punch, this time to the jaw.

Darren was not calm. He was A-N-G-R-Y. He picked up Little D and sat him on the edge of the pool, glared sternly at him and growled, “Do. Not. Do. That. Again.”

Little D looked at Darren, innocent blue eyes filling with tears and bottom lip quivering as he replied, “I’m sorry, Darren. Really I am. Can I give you a hug?”

Upon looking into the giant puss-in-boots eyes of this angelic-looking child, Darren immediately felt terrible for being so hard on him. “Of course!” he said, holding open his arms.

With a cherubic smile, Little D swam over to Darren and wrapped his arms and legs around him and hugged him tight. Filled with forgiveness for the assault and remorse for yelling at Little D, Darren hugged him back.

“I’m sorry I shouted at you, Little D”, Darren said.

Little D smiled over at his mum and I as we witnessed this sweet moment, then he rested his head on Darren’s shoulder and softly whispered in Darren’s ear, “I just peed on your leg.”

It’s been five years. I think Darren may have finally forgiven him.

ABOUT MICHELLE: Michelle Lewsen is Editor at Bonbon Break and author of the blog, theycallmemummy.com where she talks about parenting, ADHD, the highs and lows of being a stay at home parent and, of course, the lessons she learns from her three children. She has 18 years’ experience as both an Art Director and Copywriter in the advertising industry and has multiple International Writing awards under her belt. In 2013, she was thrilled to be selected as a BlogHer Voice of the Year in the “Inspiration” category. Follow Michelle via Facebook |Pinterest | Twitter | Google+ | LinkedIn | Instagram