My Child. Your Child. Neither is Better. Right? 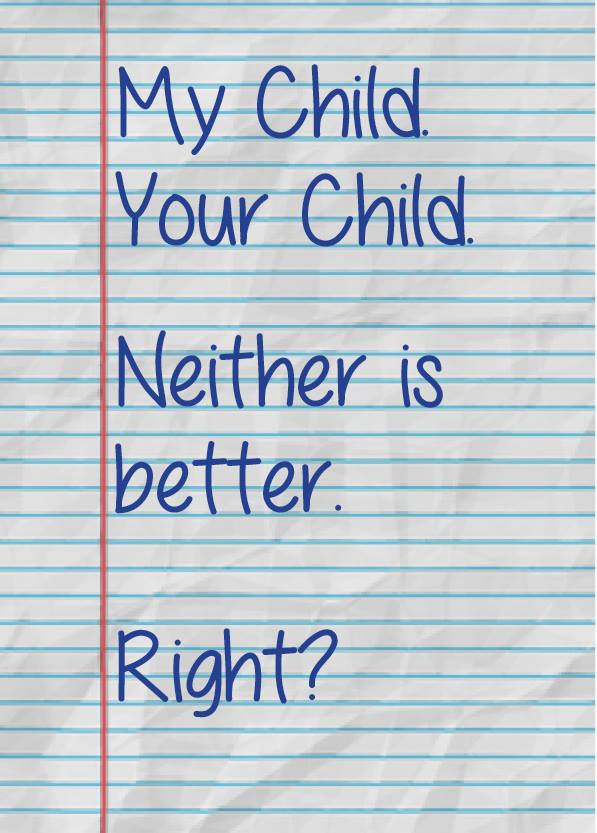 SYNDICATED from What Now and Why? by Arnebya Herndon

I have a bad habit called comparison. I compare to other children my child’s growth, intelligence, physical ability, humor, eating habits, and probably nail color choice. Is that red too red for an 11-year-old? Is my child destined to be a red nail slut? Take it off; go back to the pale pink.

At Z’s checkup last month I fretted about how small he is, how he is shorter than, thinner than, the boys in his class. We’ve had the same pediatrician for all the kids so she’s not afraid to tell me that my concerns are invalid. He’s fine. Look at it in the not this, but this way, she suggested: he may be thin, but he eats well (he eagerly eats vegetables when some kids refuse). He was potty trained at two. The list for “he has/can do” is far greater than the “OH MY GOD MY BABY IS BEHIND” list. And yet, I compare.

As I dropped off the 9-year-old at a birthday party recently, there was a moonbounce. I’d brought the boy with us as we’d simply walked the few short blocks to the party. He was unable, as is typical for a 3-year-old, to leave without first jumping. Wait, why isn’t he jumping? He’s not jumping because he’s not even in the moonbounce yet. He can’t pull himself into it. Yet, a smaller boy, under 2, whizzes by him, throws open the netted curtain, and hoists himself up with a few grunts. My boy turns, says, “You help me, pease?” Ah. We’ve been working on his not getting frustrated and stomping when he needs help. Ask for help, we tell him. But right now? I can’t help him because that smaller boy got in by himself. I should have him do arm curls when we get home to build up his upper body strength. I can’t say no because that’ll send the message that I won’t always help when he needs it, when we’ve been hammering this home so often — just ask, we’ll help.

I turned away from him, holding up a finger signaling just a second, and hoped he’d keep trying. He did, but to no avail. Down the slide and back around came the smaller boy, and back into the moonbounce he went with just a few pulls on a part of inflated tube. My boy stood there, stirrings of frustration showing on his face. I walked over and slightly scooped his butt upward. I looked around to see if anyone saw me help my clearly older child get into the moonbounce. And then I thought, screw them. I looked right at that younger kid and smiled. The fact that I was thinking, “you still shit yourself and my boy has on real underwear AND can count to eleventeen” is moot.

Why do we do this? Why do we compare our children to others? I know it’s normal and usually harmless, but it can at times be perverse. Your baby did what at five months? My baby won’t even turn over. Must win at babyness! Meh. Ask Alison. Her five-month-old is a couch-supported wonder (except forget the part about the couch and zero in on his being able to stand). Clearly, your baby is developmentally delayed. Stop it. Yes, there are times when we should worry. But stop believing that every child does everything on the same timeline. It just doesn’t happen. And still we compare.

Our middle daughter’s school does parent-teacher conferences differently (instead of the typical 12-7 appointment-less, show up and wait if someone is already in there (note to parents: if you converse with your child’s teacher throughout the year, there is NO reason for you to have a 45 minute conference. Also, I really have to pee but if I leave and there’s no one else out here, I’ll lose my spot in line. Don’t give me a breezy hello when you finally exit. I want to pee on your shoes.) This year, they designated one night and combined same-grade classes. The two fourth grade teachers gave a wonderful presentation on expectations for our children. If I were a fourth grader, I would love the two of them thoroughly. They are both determined, no-nonsense women who believe our children can do better. The motivation I felt that night made me want to go back to school (I also secretly wanted the answer to that word problem because I am anal and need to know I did it correctly. Me and the maths, it ain’t pretty, y’all). But then? Then they showed a spreadsheet plotting our children’s achievement/current level. First, there was reading. Damn straight! My girl was one of only three in both classes to score beyond the goal. I may have smugly smiled at the other parents with sub-par readers.

Then, math. Oh, how the mighty fall. None, not one of the children, was even midway to the current goal. The goal is answering 50 multiplication problems in one or two minutes (I can’t remember which, because MATH!) and my child is at 21. I may have closed my folder so no one could see her number (no names were used in the graph). I know my child. I know she is used to things coming easily and the minute she is tried, she shuts down, especially with numbers. Why couldn’t she have taken my sense of style gene instead of the Frankenstein-like Numbers Bad?

At the boy’s meeting, there was a similar occurrence. He is youngest in his class, having just turned 3. Many in his class are either nearly four or already four (meaning they turned four after September 30 so couldn’t go into the pre-K 4 class). At letter recognition he is third in his class (even though I know he knows more letters than he let on when tested). But he’s not first. And it pissed me off. And I wanted to know who numbers two and three were so I could push them down and pee on their mother’s shoes.

I will admit to looking around to see what other parent(s) may have had the smug “my kid rules” face but everyone was holding the number that represented their child close to the vest. I finally caught sight of one woman’s number. I looked at the graph still on the projector and my heart sank. Her number barely had a bar above it. That meant 0-5. Her child knows 0-5 letters. Yet I’ve seen her child. He is one of the rough and tumble boys, one of the ones who would clearly have no problem pulling himself into a moonbounce. He probably knows how to work the oven and can make himself breakfast. One of those boys who is not afraid to go headfirst down the slide or swing from the monkey bars by his feet. He has scars. My boy is coddled. My boy doesn’t even know that Spiderman comes on band-aids, he’s gotten hurt that infrequently. He has book smarts, yes, but he has nary a street smart. When it comes to comparisons, I don’t even know why this one is registering, but damn. It is. I kind of want them to play together now, so he can teach Z to jump off of semi-high walls without needing someone to catch him. Z could in turn teach him the alphabet. Barter system on learning.

The oldest girl’s parent conferences are today. I did the other two; daddy’s handling this one alone. I don’t know if it’s a good thing; I haven’t yet coached him on finding the failing child to make yours seem smarter. Besides, ours is failing in at least two subjects so there’s no place to go but up!

The point is, there will always be another child. That other child. The gifted kid. The kid who did this first, but can’t do this. The kid who can’t do this, but does this with ease. The kid who does everything effortlessly, winning at everything, passing every test. At times, your child will be each of these children. At times, your kid may do nothing correctly. And you know what? As long as you are there guiding, teaching, and helping, your child will become exactly the child he or she was meant to be. You don’t want your child to be just like another, doing things on the same scale or timeline. Let it be. And always be willing to pee on their parent’s shoes.