I Love You, Let’s Break Up by Real Life Parenting 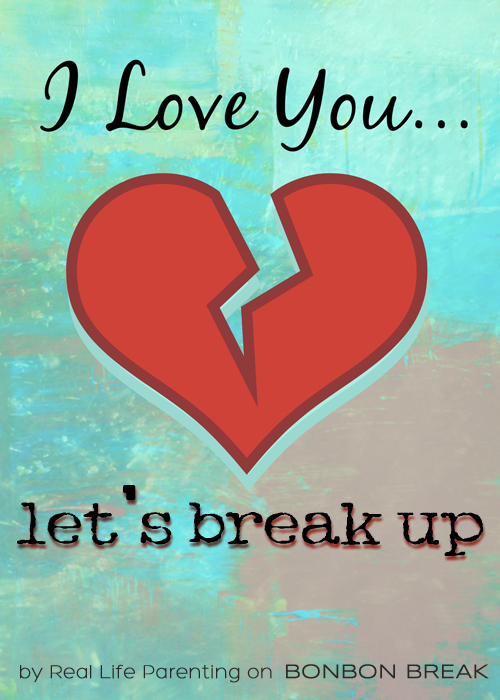 When I realized Hubbinator was the guy for me, I freaked out and broke up with him. That’s a totally normal response, right? I mean, isn’t that what everyone does when they feel like they’ve found The One? Well, that’s what I did. I guess you could say I was stupid unconventional.

I dated lots of guys before him. Lots. My stepdad will happily corroborate that. He joked that I had a “3 Week Revolving Door” … and he would make it known, to any guy who made it past that threshold, they were clearly special because it rarely happened. I just figured dating was supposed to be fun and easy–especially at the beginning. Especially for teenagers. If issues were cropping up in the honeymoon-iest possible time in a relationship, I knew it wasn’t going to work out. So I would break things off and move on … usually in the first few weeks. Holy Crap on Cupid’s Arrow! My stepdad was right!

The reasons for breaking up with a guy varied:

•      Never called me. In order to call this “dating,” we have to actually talk to each other.

•      Called too often. My mom said we have to keep the phone line open in case any telemarketers are trying to call.

•      Had no ambition. No, it wouldn’t be awesome to live in your mom’s basement forever.

•      Had no common sense. You thought throwing the entire, unopened box of mac and cheese into boiling water would make it faster and easier? Really?

•      Kissing him was gross because he felt like a brother to me. I’m pretty sure there’s a law against this.

•      And, apparently, You Seem Perfect For Me And I Think I Want To Spend The Rest Of My Life With You. I love you. Let’s break up.

In my defense, I was only nineteen when I had that realization. Which led to the thought that at nineteen I would never have a crush on anyone else. Never kiss another guy. Never have another first date. That seemed Big and Scary. So, obviously, when faced with these, you have a choice to make. An instinct kicks in, right? Fight or Flight. I chose flight.

I’m not sure this is working out. I mean–it’s going really well. We have lots of fun together; everything is easy. You’re funny and smart–and Jesus, Joseph, and Mary, do you ever have nice legs! I love spending time with you and I feel like a better person when we’re together, which obviously means we should break up. You know, there are lots of fish in the sea that aren’t perfect for me like you, and I need to keep up with that whole Revolving Door thing. So, what I’m trying to say is “It’s time to move on.”

He was blindsided by the conversation and didn’t say much.  He was hurt and surprised; I’m guessing the last thing he saw coming was a break up from The Most Awesome Girlfriend He Ever Had (those are my words although I’m sure he’d agree–well, except for the part where I broke up with him … there’s that pesky detail sneaking in again!)

Later that day, I called a friend and told her I broke up with My Future Husband. She wasn’t the swearing kind of girl, so I knew it was serious when she said, “Oh, wow, Jen. That had to be so hard. I’m sorry. I understand. Well, I don’t understand. Not at all. Like, seriously, I totally don’t get it. I mean, what the hell were you thinking??!” Uh, I dunno. It just felt so right and easy and perfect with him, so I freaked out.

The next day, I called The Man I Would Marry Four Years Later to ask if we could talk. I explained my Freak Out. He laughed about it and we “unbroke up.” He was incredibly forgiving and called me a dork. Actually, he gave me the nickname “The Anti-Celine” … as in I Was The Opposite Of Celine Dion Who Sings All About Love And Romance. Well, the joke was on him because she also sang a song called I Love You, Goodbye. Maybe I wasn’t so Anti-Celine after all.

Once we were back together, it really was like a love song. Everything was perfect–fun and easy. To celebrate his graduation at the end of that year, we took a trip to Fort Meyers Beach in Florida. After sixteen hours of him behind the wheel, it was my turn to drive while he slept. About fifteen minutes into my effort, my eyes got heavy. I tried to snap out of it (for ten whole minutes) before I woke him and said I was sleepy. He teased that his “almost half hour nap was very refreshing.”  Yep, this is definitely The Guy for me!! And, would ya’ look at that–no freak out! You’ve come a long way, baby!

Years have gone by now. We got married, bought a house, got practice kids (cats), sold the house and moved, had two real kids, moved again (five more times, actually), changed jobs. You know, living normal life with ups and downs–sometimes not much like a Celine Dion love song, others like a TV sitcom.

Three years ago marked nineteen years of dating for us. It was a big deal as we approached the milestone where Hubbinator was part of my life longer than he wasn’t. It seemed so monumental. So I said “This is crazy … I’m kind of freaking out! Do you know what this means?!” And without missing a beat, he said, “You’re breaking up with me?”

I suppose I had that coming.

ABOUT Real Life Parenting: Jennifer is a mom of two teens, wife of one grown-up, and food bowl filler of the family cat. She has spent some years as a stay-at-home-mom and others as a high school teacher. She writes about the good, the bad, the ugly and sometimes the very funny at her blog, Real Life Parenting. She was the Blogger Idol 2013 runner-up, has been featured on Bonbon Break and Erma Bombeck Writers’ Workshop, and is a contributing author in the book The HerStories Project: Women Share the Joy, Pain, and Power of Female Friendship.