What I’ve Learned: I Can Outrun Zombies 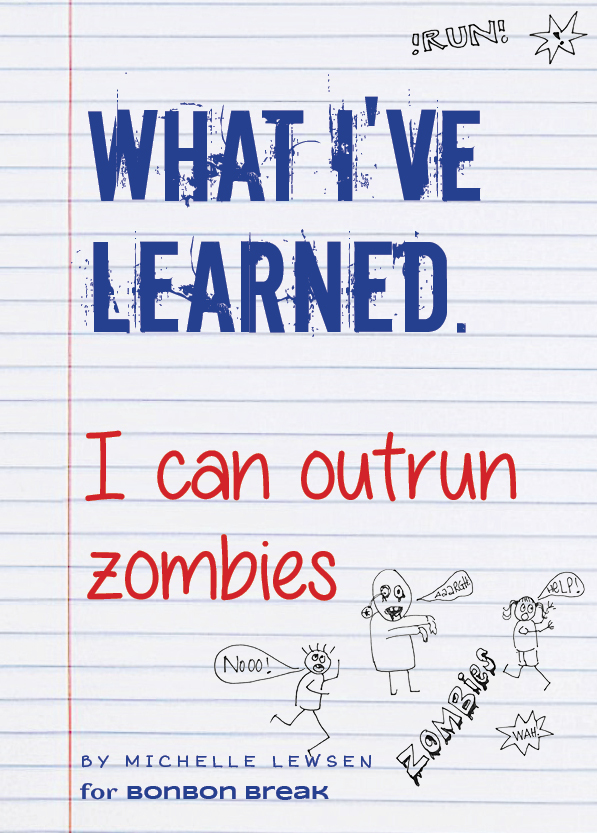 This morning, after dropping the kids off at school, I found myself in a helicopter, hovering over a post-Apocalyptic landscape when suddenly someone began shooting at us. As the helicopter started going down, the voice in my earpiece told me to grab my parachute and jump to safety. Heart pounding, I followed directions and, since I had no idea what was about to happen, I continued to listen to the voice in my earbuds.

“The helicopter is down!”, the voice shouted. “Come in! Come in! Are there any survivors? Hello?”, I heard him breathlessly call out. Then, “Yes! I see movement!”. Mr Earpiece continued, “Hey you, Runner, I see you, and I’m going to help you to get to safety. Listen carefully, there’s a swarm of Zombies 50 metres away and they’re gaining on you. You need to start running as fast as you can!”

At this point, you’re thinking I’ve lost the plot, aren’t you? Well, this wasn’t a weird dream, my friends. This was real. Really, it was!

Yesterday, I downloaded the “Zombies, run!” app on my iPhone in a bid to add excitement to my runs. What I just described was the beginning of my run this morning.

Picture it: there I was, at the local park, wild eyed and running from imaginary zombies. The audio in this app is so well produced that my heart really was pounding as I flung myself enthusiastically into this apocalyptic fantasy scenario.

Now, where were we? Ah, yes, zombies were 50 metres away. The voice continued, “You’re going to need to speed up, Runner Five, they’re gaining on you.” Thud thud thud, my heart and running shoes thumped in unison. Earpiece Man then added, sweetly, “Know why I’m calling you Runner Five? Because the last four runners…well…they didn’t make it.”

“Oh, no! They’re really gaining on you now! They are twenty metres away…no, ten! Run as fast as you can!”

This would be a good time to mention to you that I forgot to put on a sports bra this morning (I didn’t foresee the vigour that being chased by Zombies would require. Silly me, so unprepared for the apocalypse…) so, by this stage, there was a swish swish boing to accompany the thud thud thud.

“Don’t look behind you! They are right on your heels!” Oh holy hell, this stuff sounded way too real! People  in the park stared, bewildered as this wild-eyed, wildly-swinging-boobed woman sped past the playground, huffing and puffing.

Then, they amped it up. I could hear zombies breathing in my ears. BREATHING IN MY EARS, PEOPLE.

“Well done, Runner Five, you’ve outrun them!” (Hooray, Earpiece Guy, I also lost all the elasticity in my boobs. Whoop.) “The bad news is that everyone in the Settlement earns their keep, so we wont let you in if you don’t go through the hospital to collect supplies.”

Through the hospital I ran, collecting supplies (aka past the playground full of mums and babies enjoying a sunny Summer’s day. Lucky them, not being chased by zombies and being denied saviour by mean Settlers). According to the narrator voice (yes, I had more than once voice in my head), I collected 3 first aid kids, crutches, antibiotics and a sports bra. Oh, the irony. What use was an imaginary sports bra to me and my now-sadly-saggy bosoms?

The zombies chased me for a total of 45 minutes until I finally arrived, red-faced, panting, sweating and laden with important supplies (at this stage I had three sports bras – clearly a much-demanded item in Apocalyptic times, FYI) at the Settlement.  I tucked my boobs into my waist band and caught my breath.

What a fabulous app, what a horrendously divine run, what saggy saggy boobs.

My big achievement today: I wasn’t killed by Zombies! (Next mission, however, I’ll arm myself with a real sports bra. The imaginary ones don’t work as advertised…)

While I wasn’t compensated by the creators of this app for this post, I will earn a few cents if you download the app and join me in the madness by clicking this affiliate link:

ABOUT MICHELLE: Michelle Lewsen is Editor at Bonbon Break. She has 18 years’ experience in the advertising industry and multiple International Writing awards under her belt. In 2013, she was thrilled to be selected as a BlogHer Voice of the Year in the “Inspiration” category. She is  also the founder of theycallmemummy.com – a website for women (parents and non-parents, alike) covering a wide range of topics from parenting to work-life balance to mental health and fitness.