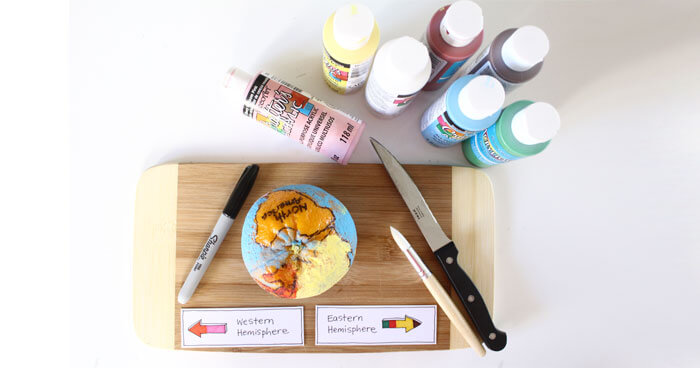 Teaching young children about the world needs to be hands on, yes they can see the world around them but the size and how diverse it is out of their sphere of understanding. Hands on work with the children is the best way to get them to understand, and this fantastic Hands On Geography Lesson; Teaching Hemispheres is such a fantastic way to get them interested and remembering.

Z (3 years old) loves and already knows all the seven continents, but I wanted to show him the concept of Western and Eastern hemisphere.

So here’s what we did:

Western and Eastern Hemisphere – Cutting an orange in half

First, I decided that I needed to show Z how the Western and Eastern hemispheres come about. Concrete learning is very important for children aged 2-6 — it is the way they are able to learn before moving to an abstract level.

I took an orange and drew a rough impression of the seven continents, making very sure that when we cut the orange in half, the hemispheres would turn out correctly. Then I used acrylic craft paint to paint the continents.

I hand-wrote and drew the labels for Western and Eastern Hemisphere with arrows. The arrows work as a control of error in this exercise. I also colored the arrows with the continent colors (except Antarctica which is just white.) Although he can’t read yet, he can roughly guess words using the beginning sounds — in this case it’s “w-w-western” and “ea-ea-eastern.”

I find it so thrilling when the activities I do with Z spark a deeper interest, curiosity or question. You can see the gears in his mind are just cranking away! He is already wondering about “up and down” and so the Northern and Southern hemispheres would definitely be another lesson in the near future, along with compass directionality.

Then I thought we can incorporate a little art into our lesson, after all when a child reproduces his work, the lesson becomes reinforced in his memory.

We used paper plates and liquid watercolor to reinforce this lesson. Our brushes are from Ikea and I have to say they are pretty good!

I created a rough outline of the continents — first using pencil, then a marker, then using crayons. I apologize that my outline was really bad. You may have noticed that Antarctica in the Western hemisphere is way off! Plus I spelled Antarctica wrongly and just realized it. I learn something new every day through my children!

Then I let him paint away! The continents were a breeze for him to paint.

Then he had to paint the oceans. And painting carefully around the continents isn’t an easy job for a 3 year old, it requires some practice. He went really rough in the Western hemisphere and poor South America is totally covered by water, but after I demonstrated how to carefully paint around the lands, he did much better in the Eastern hemisphere.

The paintings and the labels will be left on his shelf for further exploration and repetitive work. I love how he is making his own learning resources! (except the labels) 😉

ABOUT ELAINE: Elaine is a blogger at Planting Peas who writes primarily about Montessori inspired learning and fun kids activities. She lives in Canada, and is blessed with a loving husband and two wonderful children ages 3 and 8. She is a simple, typical mom-next-door who loves to rediscover the joys of learning with her children and hopes to share, inspire and help others through her journey and experience.