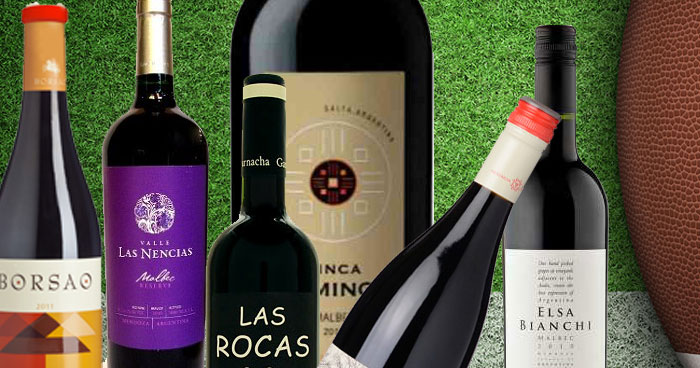 Pick a winning wine every time. Easier said than done.

Knee-deep into football season it’s easy to fall back on wines you know because, let’s face it, the game is on, the house is a swamp, your husband is cussing at the television and the last thing you want to do is roam the wine aisle and come home with a loser. I should mention at this point that the kids are extending their go-go gadget arms out of the cart, handling every bottle within reach? What a game! Except in this game, winning means a pool of fermented grapes awash in the end zone. Score none for me. Boo.

So, how do you win the last man standing and fantasy league of the wine world? It’s simple. Go against every rule your husband and his friends have. Every last one!

1. Always pick the away team wines. And by away, I mean AWAY! Go long. Way long. Go French. Go Spanish. Go Argentinian. Go anywhere, but the states, and you’ll be in 1st and goal range. The rationale is: a lot of alcohol is consumed during a game and cost is always an issue for the mom-enade, right?

2. Don’t show loyalty, it’ll put your Sunday tailgate party into a tail spin. Like Cabernet? Opt for Malbec. Want Pinot Noir for grilled salmon? Make a trade for Grenache. Is Chardonnay your favorite QB? Drop her, she’s injured. Pick up a white Rhone blend or a verdejo.

3. Pick based on the uniform!  Like a label? That’s reason enough to try something new during football season. Like the description? Go for it. I find it more fun to take a risk. It’s often sweeter than going with your first string.

4. Pick the old guy sitting on the bench. Give that dusty old bottle of wine a shot. Chances are it was brought into a store when someone who knew wine worked there and has been collecting dust ever since they left. This means you may have a diamond in the rough. A bottle has developed over time and hopefully increased its potential.

5. Pick the rookie!  Little-known wine grape varietals nab smaller salaries as they build their name. Sh*t, I’m going to fly my Seahawk 12th Man flag here, but c’mon, RGIII winning Rookie of the Year over Russel Wilson? I rest my case. Go for the underdog!

Okay, I’ll admit, I’ve had enough fantasy football wife years to play fantasy games of  my own device. I remember douchebag dog killer, Michael Vick. For him, I’d pick Mad Dog Orange Jubilee, it’s not wine AT ALL and I can’t imagine he’d have any taste whatsoever. Besides, he deserves the worst hangover that EVER was. EVER!

Then there’s Aaron Rodgers, who replaced Brett Favre for the Packers and seems well groomed to be the next Madame Ponsardin of Veueve Cliquot, yellow label Champagne, reliable every year. He’s nice to look at too, right ladies? And, hey, the dude came from Chico, CA, and made something of himself, let’s give him a toast!

Next up? Peyton Manning. The man only Bronco fans believed would stage a comeback. Manning, with the talent he’s showing after countless surgeries? I’ll bestow the ranks of Bond wines from Napa on him. Even the labels are made of money. The wine will age well over many years much like Manning has.

Okay, are you with me? I rarely watch pro ball except my hometown Hawks (I’m an avid college football girl and UW Husky alum) and yet, here I am, with an arsenal of useless football knowledge that I play fantasy wine pairing with. So, are you ready for some football…wine? Someone over at Annheuser Busch just put a hit out on me, I’m sure. Ah, well, here goes!

Why? It’s for chili and meat, silly. Plus it’s cheap and delicious.

This wine is as likeable as a great artisan chocolate bar. It’s round and full, has wonderful creme de cassis and dried red fruits notes and is a stellar pick with meats.

Why? Because I LOVE Grenache and you should, too. It’s your great friend who gets along with everyone, even if she’s a 49er fan and you’re a Seahawk.

Gobs of blackberry, cherry, vanilla from oak aging and a spicy, lengthy finish. It’s good for a 1st Down!

The Rookie (only because of price): Borsao Garnacha, Spain $8

Borsao–WOW! So nice for the price and I’m constantly winning people over with its raspberry, blackberry, spicy goodness. It’s sheer awesomeness!

ABOUT LAUREN: Lauren is the writer, photographer and designated boozehound behind mamasomm.com. When she’s not deducting wine nuances for her job as a wine, beer & spirits buyer for an indie grocery store, she can be found cooking, drinking entirely too much coffee, reluctantly chauffeuring, happily reading and barely housekeeping for her two toddlers and her hubby (fortunately he drives himself!).

Lauren incorporates parenthood and alcohol with responsibility and a sense of humor. Her message? Don’t fear wine, get to know it. Have a question? Ask me!

She’s a Certified Sommelier with the Court of Master Sommeliers and has a Journalism degree from the University of Washington.

Baked Parmesan Crisps by Under the Table and Dreaming

Polenta with Slow-roasted Tomatoes and Pesto by Daisy’s World