Dan Turner: You Are the Problem 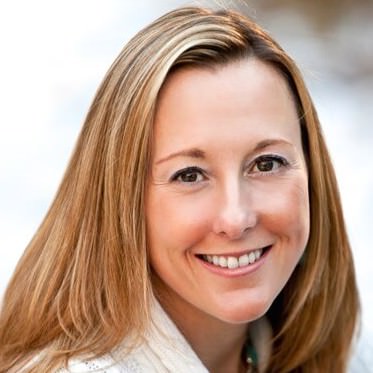 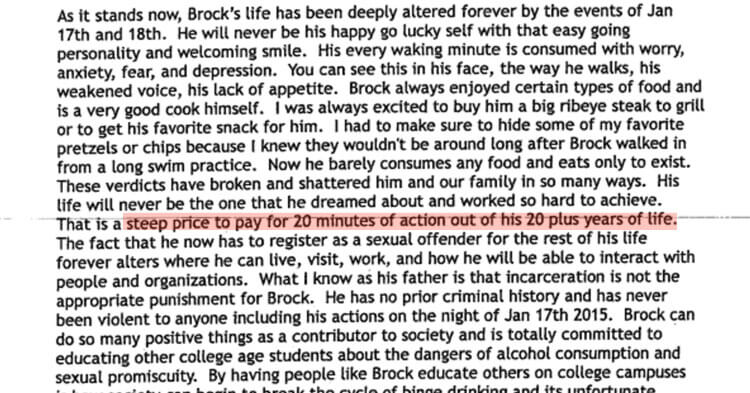 I bet if you and I broke bread and shared a bottle of wine, we’d have a lot in common.

I’m a parent too, and I would love to hear how you raised such a gifted, smart athlete.

I would guess you spent countless hours driving your son back and forth to early morning swim practices, rising before five a.m. several times a week. I am sure you gave up entire weekends to watch him swim at competitive meets and spent thousands of dollars on coaches, gear and training. I imagine your family sacrificed quite a bit to chase Brock’s dream, what became your dream, of scholarships and possibly even the Olympics.

I can’t fathom the joy you felt the day he signed his letter to attend Stanford University, one of the most prestigious schools in the country. Your heart must have burst with pride at what your son achieved.

I bet you could tell me stories about the time he shaved seven seconds off an event at a State championship or when he spent an extra hour in the pool to get his turn perfected so he could beat a record time.

I get it. Winning in the pool often comes down to milliseconds, and momentary mistakes have consequences.

You seem to forget this small fact.

And that’s why you are the problem, Mr. Turner. Your statement detailing the impact this event had on your son omitted one small detail: his victim. The lack of acknowledgment and empathy you offer the woman he assaulted behind a dumpster demonstrates that you believe your son is above reproach. The insinuation that Brock’s sentencing was unfair suggesting that county jail with probation (instead of the usual mandatory sentencing of several years in lock-up) is a “steep price to pay for 20 minutes of action.”  You imply that your son’s feelings of despair and anxiety for the loss of his future trump the irreparable harm and lasting damage he caused the young woman, her family, and her boyfriend.

Your son’s life changed the moment he decided to pursue a woman so intoxicated she could not speak or even stand on her own. That mistake — that crime — cost him his Olympic hopes.

Your discounting his role in this event will cost him something much more: any chance of learning that his actions have measured consequences. You gave your son — and every other young man on campuses across the country, an out for rape.

It must be heartbreaking to watch your child’s life destroyed because of what may have been his first drunken binge at a frat party. This pales in comparison, however, to finding out your daughter was violated in rubbish by a young man that didn’t even know her name. Living with the fact that the convicted perpetrator has no remorse about the crime, and in fact, won’t even admit to it, must be unbearable.

But life is made in moments, Mr. Turner, and drinking wasn’t your son’s only bad decision that night.

As the victim so eloquently stated in her letter to your son:

“You said, Being drunk I just couldn’t make the best decisions and neither could she.

I do not know how you chose to raise your son, Mr. Turner, nor can I judge. I am sure you are doing what you feel is in the best interest for him.

But I beg of you,  decide at this moment, this very second, to hold your son accountable for his actions. He made an incredible mistake and will pay for it for the rest of his life. It’s your job to help him understand that what he did was wrong; not make it easier for him.

His victim was not sexually promiscuous. He did not have consensual sex. It was not a run-of-the-mill college encounter. Drinking is not an excuse.

He committed a violent crime and needs help. If you don’t understand this, you need help.

The moral lines remain blurry in today’s world, particularly for those gifted with athleticism, intelligence or wealth. No longer can we blame our kids’ poor decisions on violent video games, rap music or films that glorify criminal behavior. It comes down to us, the parents, Mr. Turner. It’s up to you to help your son see his wrongdoings, and give some semblance of closure to his victim.

You can have unconditional love for your child and hold him accountable — at any age and under all circumstances. You can be loyal to your family and responsible to the outside world. You can still hold your six-foot-two-inch son tight and teach him to own up to his actions, even if that means losing his — and your — dreams.

Brock cannot “educate” others until he first understands his crime, and make no mistake about it, this was a sexual assault, not a drunk night gone awry. Unfortunately, because you do not hold your son accountable for the rape, and Santa Clara County Superior Court Judge Aaron Persky sentenced him only to six months in county jail and three years’ probation, the message is loud and clear to other potential offenders: you are not responsible for your behavior if you get drunk, especially if you are a world-class athlete.

You are part of the rape culture, Mr. Turner. You are the problem.

You may be interested to know I’m raising athletes too. My three girls follow their sports with passion and vigor. We spend our weekends trekking all over the Midwest, cheering loudly for every achievement and encouraging them to work hard and play harder.

I don’t see scholarships to elite colleges in our future, though, and certainly not the Olympics. Their father and I have more modest dreams: we hope they graduate high school and college, and then move on to live happy, fulfilling lives.

And we pray they won’t get raped.

Because we are scared, Mr. Turner. We are scared that one day our girls will drink too much at a party, experiment with drugs, or trust the wrong person, and the direction of their life will change in that one second because someone like your son Brock wasn’t held accountable; because you made his Olympic dreams more important than his victim’s ability to sleep at night.

He is not the victim, and the sooner you stop treating him as such, the sooner he may realize the impact he had on an innocent young woman’s life. Your attempt at marginalizing your son’s assault only ensures another young man will do the same.

The devil did not make him do it. The alcohol, while having an impact, did not make him do it. And I hope for your sake that Brock does not come out one day and point his finger at you, Mr. Turner, stating that it was, in fact, his parents coddling that made him believe he could get away with anything and everything, including sexual assault. The “affluenza” defense is very real in America.

There are no amount of anti-drinking ads or lectures your son can give that could make this a net-positive for the victim. She will pay for his decision for the rest of his life. And because you and your son are not acknowledging his actions, the culture of rape at our colleges, particularly among elite athletes, continues to grow.

You are part of the problem, Mr. Turner. Take twenty minutes — and the rest of your life — to think about that.

I am sure your son’s victim will.

From the victim’s letter to her assailant at sentencing:

“As a society, we cannot forgive everyone’s first sexual assault or digital rape. It doesn’t make sense. The seriousness of rape has to be communicated clearly; we should not create a culture that suggests we learn that rape is wrong through trial and error. The consequences of sexual assault need to be severe enough that people feel enough fear to exercise good judgment even if they are drunk, severe enough to be preventative.” 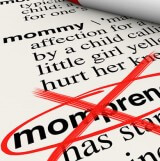 Stop it with “Mompreneur” 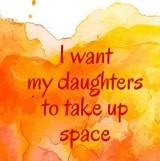 I Want My Daughters to Take Up Space

Whitney is the mom to three tween daughters, a communications consultant, and blogger. She is trying to break out of the typical suburban mom mold despite the fact that she is often seen driving her minivan around town to soccer tournaments and PTA events. She shares her views on parenting, relationships, and w(h)ine at Play Dates on Fridays.
Next Article