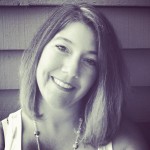 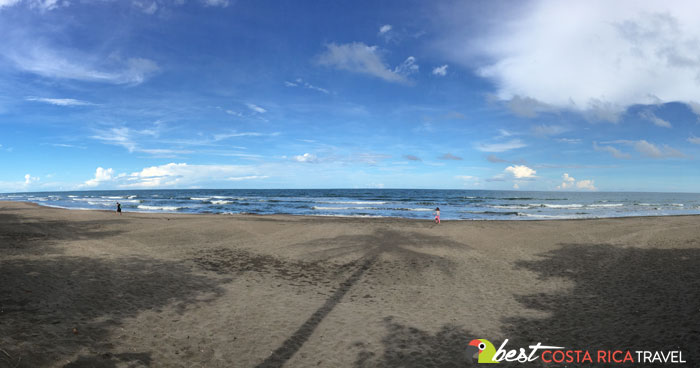 Are you new to our adventure? Here is how it all began.

On the first leg of our family trip, we journeyed from San Jose to Pavona where we caught our boat to Tortuguero, on the Caribbean coast of Costa Rica.

From the moment we hopped onto the boat and headed through the canals, we were completely consumed with the scenery. Lush jungles surrounded us, and birds, monkeys and basilisks were easy to spot. Well, they were easy to spot thanks to our guide, Jimmy.  He is a pro at picking out little things to show us along the way from wildlife to spots of historical and cultural importance.

When we arrived at the lodge, our minds were officially blown. From the rooms to the food, everything was wonderful and beautifully appointed. It wasn’t overdone, but clean, comfortable and, honestly, perfect.

We all had a GREAT time at the pool, whether I was just working poolside with the palm trees swaying or all of us were splashing and diving under the bridge and hiding from one another behind the island in the middle of the pool.

The activities were varied, but the one constant was Jimmy. In his usual fashion, he came running up to us one morning and yelled, “Run out to the beach!” We all went running across the manicured lawns and paths to the white sand beach and saw a beautiful Green sea turtle heading out to sea. In the evening, we were able to see baby turtles head out to sea. While we were relaxing, he was always searching for something extraordinary for us to see.

Boat rides through the canals of the Tortuguero National Park were a definite highlight. We saw the Agami heron, monkeys and more. We loved hearing the story of the Great green macaws and then seeing them fly overhead. It literally took our breath away. When an area is taken away from it’s people through logging, you know it is coming back when you see animals like the Great green macaw finding its home there again. They are a beautiful symbol of good change.

Here is what my crew thought about our first destination:

Neil (The Adventurer / Husband / Dad): I like that we saw a hit list of the animals and birds that we really wanted to see. We saw a Green sea turtle out of the water during the day and we were able to take some great pictures. We were able to see baby sea turtles going back to the water and aricaris and the Agami heron. We saw spider monkeys, Capuchin monkeys, and Howler monkeys; so we were able to see all three species in this one leg. We were able to see Montezuma’s oropendulum which is one of our favorites because it was the first bird Val and I saw and were able to identify on our first trip to Costa Rica; so that was awesome.

The coconut tour was unbelievable. We learned how important the coconut was to the people on the Caribbean coast. They literally needed it to survive and they used every single part to make money and for dietary purposes.  Their medicine cabinet was in the garden. For example, they would use the bark of a tree for a toothache. They would use the oil and eat the shell of the coconut for anemia. It was an incredible learning experience.

Cole (Age 8): What I liked is that we got to see a lot of iguanas and I could chase them. I got to look at them and I took a few videos, but they didn’t turn out too good. I also went to the pool with a tower and I swam under it. So cool.

I also saw basilisks and super cool turtles. Today we went scared a basilisk and saw it run across the water. So cool. We saw Howler monkeys, Capuchin monkeys, and spider monkeys. We saw how to cut and carve coconuts. I think it was a really really really really cool experience. I also had a good time with Jimmy, he took us out birding and we went to a national park that is on the water. Isn’t that interesting? Oh, and our boat driver, Neste, was awesome, too. We went birdwatching with Jimmy. He is SUPER good at finding everything.

I also found a coconut on the beach and worked on it for a couple of days to open it. When I finally opened it, I put it down on top of my mom’s suitcase and it accidentally all spilled all over. It was pretty funny! (Editor’s note: Um, ya.)

One of my absolute favorite parts was seeing the Great green macaw.

I learned that coconuts have coconut water inside and I learned how to make coconut milk AND we made coconut candy. Oh, my yummy. That coconut candy and the coconut drink it was SUPER good. That’s my last sentence about Tortuguero.

Oh, wait!  I also got to see iguanas and chase them through a maze which was cool because they were the animal I studied for my animal report. A sad thing was that we went on a night hike and saw a dead baby turtle, BUT we got to see a live baby turtle. Actually, A LOT of baby turtles. Dang. That was so cool.Oh! We got to see a big big big big Green sea turtle. It was SO amazing to see!

Kate (Age 5): What I liked was that we saw some parrots on our first day and we also seen the basilisks and seen the geckos and lizards. And the swimming pool was deep and shallow. That was awesome. We got to see baby turtles and the big turtle and we went swimming in the pools. The pool waterfall was a tiny bit scary, but not really. Ok, not. We got to see Great green macaws, caiman and geeeeeeeez so many other animals. Which ones? Let me think about that a little bit more.

I thought it was hilarious (pronounced HUH-ware-ee-us) is that we saw a huge gwee-ana, gee-ana…wait, what is it called? (Iguana) Oh ya! Iguana! It was orange. Isn’t that funny? And we saw it in the tree. Oooooooh and the spider monkeys and hearing the Howler monkeys (insert Howler Monkey imitation). That turtle was SO speedy! I couldn’t believe that, could you? I mean it was a baby and zip zip zip zip down the beach. Great green macaws! We saw Great green macaws! I really loved that. That big turtle was SO slow on the land.

Let’s talk about coconut candy. We shredded it and mushed it and cooked it with fruit juice and sugar and a bunch more things and I ate it in a LEAF! So good. Drinking the coconut drink was good with coconut on the side. I didn’t even know that I liked coconut like that before and now I know I REALLY like it. Daniel Tiger was right, “Try new things ’cause it might taste gooooooood!”

It was a non-stop learning experience. We loved the Coconut Man! The coconut drink was AMAZING and there was something in it that reminded me of tapioca. It turns out, it is from green coconuts and it really enhanced the flavor and texture of the drink. Honestly, it was so hot and that drink was so refreshing. It was perfection. As we learned, we were able to enjoy the beverage and then he made coconut candy, which the kids STILL bring up all of  the time. We learned about the difference of fresh coconut, coconut oil, coconut milk and coconut water. Each one has unique attributes and benefits. The icing on the cake was that he had the kids plant a coconut. In 12 years, they will be able to come back to Tortuguero and harvest their own coconuts from their tree.

From beginning to end, this was pretty much my constant state of being in Tortuguero:

One thing that we love about touring with Best Costa Rica Travel and Jimmy is that when you are traveling between destinations, he stops trucks to grab palm oil seeds, and pops into a stranger’s yard to grab achiote (with permission, of course!). Along the way, we stopped in a banana grove to talk to some of the workers about the bananas grow and how the harvesting happens. It is a constant education.

From Tortuguero, we headed to Sarapiquí. Stay tuned for details from that leg of our Costa Rica adventure!

Costa Rica: A Family Adventure and How It Came to Be

All photos were taken by Neil and Val Curtis and may not be used without expressed permission.