Moms & their Teenage Sons: You’re not as different as you think! by Science of Parenthood 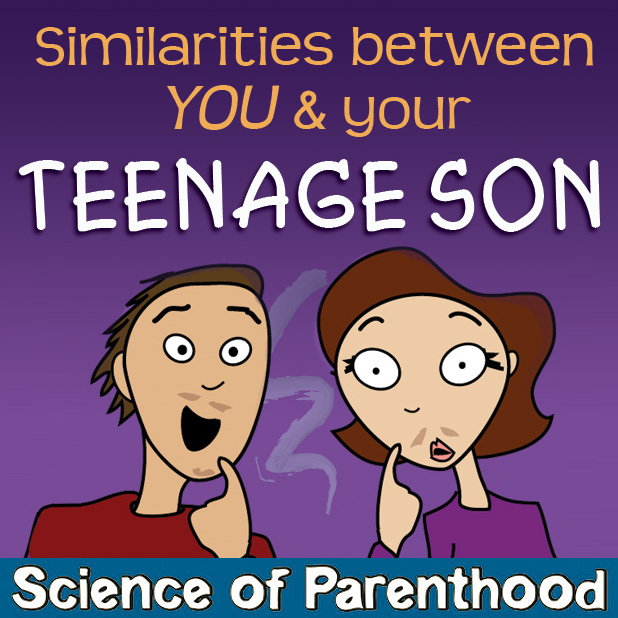 They say that when your little boy becomes a teen he’ll morph into a raging ball of hormones, eating everything in sight and tearing, hulk-like, thorough all of his clothing. Super! So will you, mom! If you follow the typical American timeline of having at least one of your kids in your mid-thirties or so, you’re right on target to be armpit deep in peri- or full-blown menopause at the same time your child screeches around Tween Corner and floors it right into Teen Straightaway.

Take heart! While it may seem as though you and your precious baby now have zero in common, you might be surprised at the new things you now share. For example:

Daily monitoring of facial hair: You both spend hours in front of the mirror hoping to catch a chin hair as it sprouts.

Interest in exercise: Your son’s emerging physique encourages him to pump iron. You hit the gym in a desperate effort to keep everything from sliding even further south.

Focus “below the belt”: With paradoxical levels of wonder and panic you’re both asking, “What is HAPPENING down there??”

Inability to sleep: He’s up all night texting and playing video games. You’re up until dawn with hot flashes and night sweats.

Increased acne product usage: There is nothing sadder than sharing acne products with someone in their target market when you are several decades out of it.

Wardrobe malfunctions: As your son explodes out of every shirt and pair of jeans you buy him, you burst out of every bra and waistband.

Body Geometry Shift: His body begins to form an upside-down triangle, while yours starts to resemble triangle sitting decidedly right-side up.

Obsession with the passage of time: He is itching for everything and everyone to go faster, FASTER! You are praying things slow down for just one damn minute.

Inflated spending on space-age materials: While you replace all your clothing with Spanx-ified versions, he’ll be investing heavily in the Trojan brand.

See? SO much to talk about! Not that either of you will want to.