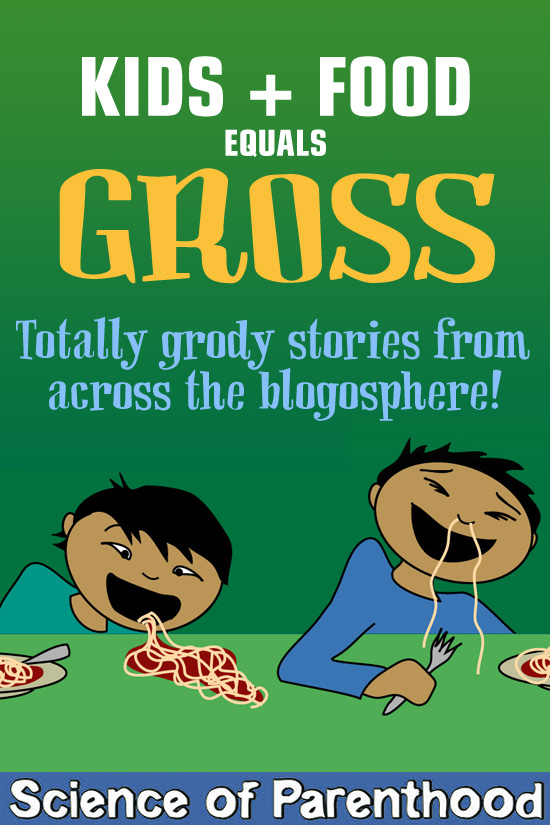 This was going to be a story about me and my kid’s disgusting experiences with food. Then I thought, I bet our friends and readers have MUCH better stories! Let’s crowd-source this bad boy!

Of course, I’m still going to share my favorite gross kid + food story from when my kiddo was little. Here we go:

I’d walked into preschool one day as my then-2-year-old came bounding over to proudly exclaim, “I’ve got a RAISIN in my NOSE!”

Because my baseline for most emergencies is “This isn’t happening,” my first thought was, Huh. Is he for real? It’s not like him to make up something random like that … I’d better look.

Surely, this is not happening …

I tried to look up his nose, but it was pretty dark in there. Honestly I couldn’t see much. But then … maybe … wait … I thought, Is that …? Crap! That IS a raisin! And it is WAY UP IN THERE.

In an attempt to get it back out he had really jammed it up into his sinus cavity. Super.

Shit! This was totally happening.

At this point his preschool teacher had become aware of the situation and was quietly freaking out, hoping that I wasn’t going to start loudly freaking out.

I had a feeling going in after it was going to be a mistake. Sticking pointy, metal tweezers up into my wiggly son’s skull seemed like a bad call. As a kid, I had never been that good at that game Operation. In this case, the “zap” would likely equal a gushing nosebleed.

Then … genius struck! I hopped him up onto the counter and told him to hold still because this was going to feel weird (Note: that was the last time the phrase This Is Going To Feel Weird didn’t make him take off running). I plugged the opposite nostril and asked him to open his mouth. Then I blew a short, firm blast of air into his mouth.

The air had nowhere to go but out the raisin-blocked nostril. Out came the air along with the mucous-covered raisin. Right onto my cheek. Ah, glorious motherhood!

I think I became his teacher’s favorite parent that day because a) I didn’t freak out b) I didn’t blame her and c) I made that raisin my bitch.

But enough about me and my snot-coated adventures. Let’s hear from our friends! We put out the call on our Facebook page asking for readers’ favorite gross kids + food stories. As expected, they did not disappoint! Enjoy! (But maybe not during lunch.)

Go Big or Go Home
My 4-year-old felt raisins stuffed in his nose was just “child’s play” and way overdone — so he wedged in red grapes instead; one in each side. Fearing an ER visit, I was somehow able to extract them out with tweezers. After a hysterical hug, I turned around to find the baby shoving tweezers into his little nostril. All in a day’s role-modeling! — Stephanie Mark Lewis

Experiment Gone Awry
One time, when my son was 4, he sucked Sprite up through his nostril with a straw. He couldn’t smell anything for days. Apparently, that is terribly painful as well. He never did it again. — Michelle Poston Combs at Rubbershoesinhell.com

Points for Creativity
My daughters like to use their long hair as a napkin. It’s just perfect for wiping excess ketchup off of their hands. — Jessica McNeill Azar at Herd Management

You Can Make What Out of Pasta??

My kid turned pasta into a penis and other stuff. Here’s a picture. If you look closely you’ll see how much time and effort he spent making sure all of the “bits” were represented. Face? Meh. Feet? Screw it. Penis and testicles? I’M ON IT. Abbie Gale at AllThatMakesYou.com

At my grandma’s 90th birthday dinner, my son gagged on a piece of BBQ beef. I wasn’t at the table, but my brother was. He said it was the most disgusting thing he’d ever seen because he brought it back up and then proceeded to eat it again. Meanwhile, my brother sat there and watched my child CHOKE. Fucking asshole. — Jen Mann at PeopleIWantToPunchInTheThroat.com

… And Speaking of Vomit
Way way back, when GoGurt (that semi-liquid yogurt in a tube) first came out, our son was dying to try it. I bought some and let him have one as we pulled into the driveway. It was a hot day, and the air conditioning didn’t work in the car, so EVERYTHING in the car was sort of warm. He jumped out of the car and sucked down the entire lukewarm contents of a tube. And then promptly spewed it all over the front porch. That was 16 years ago. He hasn’t eaten yogurt since! — Laura Ehlers at Coast Of Illinois

What Goes Down Comes Back Up

My kid started choking on a piece of spaghetti. She then proceeded to pull the noodle out — with her mouth wide open, so the noodle was coming from her throat — then threw up all over the table. I swear every kid does that at least once. — Michelle Grewe at Crumpetsandbollocks.com

Gotta Have Some Gum

How about wanting a piece of gum really badly, then reaching under the diner table and grabbing a random piece from there. Ewwww! — Janet Hughes at bodynsoil.com

ABS: Always Be Snacking
My son once asked for snacks to be brought to the bathroom as he took a dump and I said hell no. Shitting and snacking don’t mix. – Deva Nicole Dalporto at MyLifeSuckers.com

In One End … And Out The Other

My toddler was pooping in her tiny potty in our MINIVAN on a road trip … while eating a bowl of rice crackers. (GAG) — Stephanie Smith Sprenger at Mommy, For Real

Want Ketchup With That?
My daughter insists on ketchup with her sunny side up eggs. The ooey gooey-ness and the colors make me gag. Her plate looks like a crime scene. On Sesame Street. — Kathi Hooper Landers at Fourminutemusings.blogspot.com

And for my NEXT Trick …
I was out for dinner with my parents and 7-year-old nephew when he started choking on a mozzarella stick. I had to leap across the table and pull it out of his mouth. It was like a bad magic trick — that cheese just kept on going. My mother, sitting next to him, just stared in disgust. — Alyson

Well, two days ago, I was a few seconds too late to stop my toddler from plucking rice out of my dog’s fluffy tail and eating said rice. Important note: We had not eaten rice in almost a week. Was I sure it was rice? There are a few other things that look like rice, but they are all bugs so that’s my story and I’m sticking to it. – Jessica Rapisarda at Welcome to the Bundle

Mommy Says We Have to Share!
My daughter was eating her chicken nuggets outside the other day at the top of the slide. It took us a few minutes to realize that she was chewing the nuggets, then pulling the chicken parts out of her mouth and whipping it all across the fence into the neighbor’s yard. She only wanted the coating, but knew she was expected to eat the chicken. I give her points for creativity at least. And I don’t like those neighbours anyway. Maybe the raccoons will move over there. — Tara at Dontlickthedeck.com

How NOT To Nuke Food
My son never wanted me to throw his McDonald’s Happy Meal leftovers away. Once, when I was sleeping (which is why parents don’t sleep), he almost set the house on fire by putting the WHOLE Happy Meal, wrapping and all, in the microwave. — Lisa R. Petty at lisarpetty.com

Cleanliness is Next to Soupiness
I have a video of my 2-yea- old “massaging” a bowl of Ramen noodles. — Jenn Rian at Coolestfamilyontheblock.com

OH MY GOD, WE HAVE A WINNER
Our 1-year-old dipped a washcloth in the toilet, then started sucking on it. He, of course, giggled at how horrified his big brother and I were! — Shari at MomShar.com