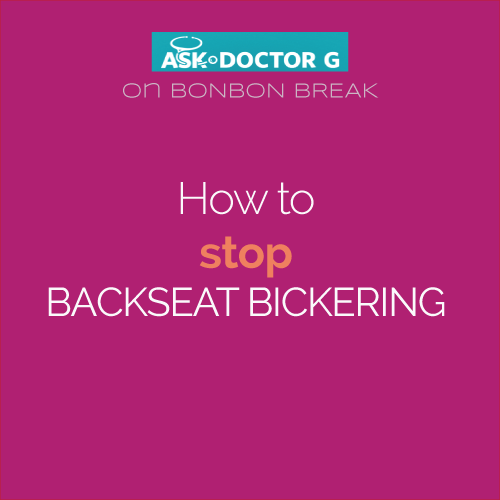 Summer is coming, and we’re planning some travel. With four kids, it has to be a destination pretty far away to motivate us to by six plane tickets! So we spend a lot of time in the car. And nothing ruins a drive faster than bickering. “He’s touching me!” “You’re on my side!” “Gimme that!” It is nails-on-a-chalkboard, isn’t it?

Stop the bickering in seconds!

This is not my own tip, as I freely admit in the video. I heard this idea on a travel show on the radio, years before I even had kids. But I know sheer genius when I hear it!

ABOUT Dr. G: Deborah Gilboa, MD is a Family Physician, mom of 4 boys, international speaker, and author. She developed the “3 R’s of Parenting” to empower parents to raise respectful, responsible, and resilient kids. Her new book released September 2014, Get the Behavior You Want… Without Being the Parent You Hate! She is a frequent contributor to ABC, CBS, WQED, Huffington Post, Parenting Magazine, and others. Check out her free downloadable tools to make your parenting more effective!

CONTINUE READING IN THE FAMILY ROOM or VISIT DR.G on BONBON BREAK