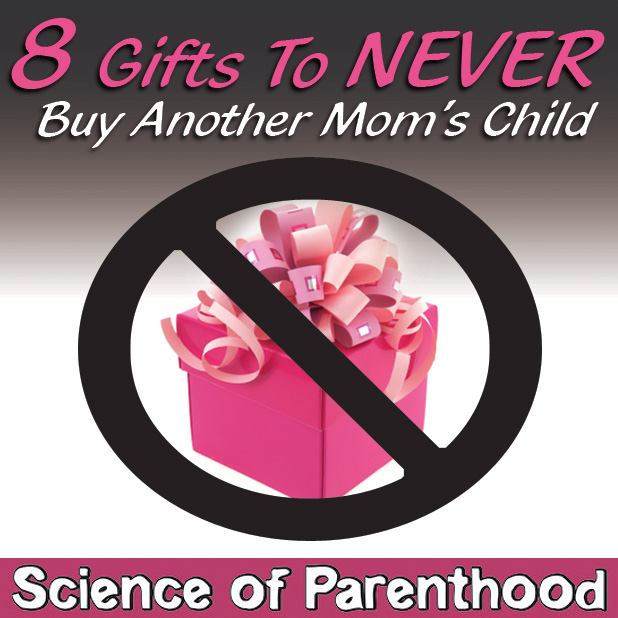 This weekend we’ll be celebrating our son’s eighth birthday. And while my son is giddily counting down the days until he is finally another year older, for me, his birthday comes with a certain measure of dread. For even more than the thought of hosting 20 third-graders hopped up on sugar and determined to wreak as much havoc as humanly possible, I dread the birthday gifts they’ll leave behind for my son when they go.

* Something the kid will hate

* Something the kid will love

* Something that he’ll love … but that will earn you the stink-eye on the playground and ensure that you are forever blackballed from the cool moms drink-a-thons.

So, as a public service to moms everywhere, I’ve rounded up the absolute worst offenders in the birthday gift-giving and party-favor department — though these rules hold true for any other occasion that requires the giving of gifts.

If you want to keep your mom friends — and good ones are sooo hard to find — under no circumstances should you EVER give the child of a fellow mom ANY of these eight Producers Of Hell On Earth. And if you’re ever tempted to do so, just remember that eventually your kid will have a birthday party — and payback is likely to be deafeningly loud, ridiculously sticky and/or unable to be removed from upholstery despite repeated professional cleanings.

Anything that makes the ears bleed. Remember Spinal Tap (“This one goes to 11”)? Any gift whose decibel level makes an Ozzy Ozbourne concert seem like the Quiet Zone is not the stuff of gift bags. And this goes DOUBLE for those toys whose Off buttons are cunningly hidden inside a panel that requires a specific screwdriver not typically found in a standard tool-kit to access. I used to wonder why one veteran mom (grandmom, actually) persisted in giving my son board-books and wooden puzzles that made every kind of siren noise, engine whine and construction clang known to humankind … until I realized she wore a hearing aid. If a mom will require a cochlear implant after prolonged exposure to a given toy, for the love of all that’s good and holy, leave that fucking thing on the shelf.

Anything whose repetition will land you a suite in the Rubber Room Hotel. A subset of the Toys That Make The Ears Bleed category, these kinds of toys loudly tootle out songs that you cannot get out of your head with an ice pick — though after a few rounds you will desperately want to try. Give a kid a gift that plays the synth-pop version of It’s A Small World on an endless loop, and no jury of her peers will convict that kid’s mom for what she will do to you once she hunts you down.

Anything that makes Chucky look like a cuddly Cabbage Patch doll. Like the pink pig one of my husband’s aunts gave my son one Christmas. This little piggie, which came dressed in a glittery red Santa suit and oinked out Jingle Bells when you pulled its tail, looked like the result of a Deliverance/Amityville Horror mashup. And it went from the gift bag right into the garbage bag.

Anything that Daddy will think is HIS. These gifts usually come with a remote controller. Or they fly. Or they have a remote control gizmo that makes something fly. And while this SOUNDS like a great gift idea, what happens when Dad spies the RC Anything nestled in the tissue paper is that his Inner Child jumps out and grabs it. Your child will never see it again.

Anything requiring Mom’s participation. As any working mom will tell you, this is just wrong, wrong, wrong. Mom needs toys and projects that will captivate her kids so she can work in peace. NOT toys that require her to read instructions and mix stuff together while her kid sits next to her playing Minecraft till everything is set up. Or toys that require her to jump up from her desk every five minutes because “I need help, Mommy.”  If a kid can’t take it out of the box and immediately start entertaining himself, preferably for hours, it’s a no go.

Anything Living. My friend Tina’s twin girls once left a birthday party with a pair of goldfish in a favor bag. G-O-L-D-F-I-S-H. And not the fluorescent baked kind either. WTF??? Sending a kid home with a living goldfish in a bag isn’t gifting a child with her first pet. It’s saddling a Mom with the obligation to race out and find replacement fish every few days when the darn things inevitably get scooped up by the Great Fish Net in the Sky. Fortunately, that hasn’t happened to us yet, but I’m floating a rumor that I’m allergic to goldfish, just in case.

Anything that comes with a bazillion little tiny pieces that will inevitably scatter throughout the house. This was my bad, fellow moms. Learn from my mistakes. Back in our nursery school days, I actually did buy a little girl in my son’s class a jewelry-making set because what little girl doesn’t want to deck herself out in lots and lots of jewelry? Unfortunately, I had forgotten that the little girl’s father has a fucking doctorate in OCD. That is, until I got their note “thanking” me for such a “thoughtful” gift … “all 800 pieces of it.” The other thing I’d forgotten is that the little girl’s mom is an FBI agent. She knows my whereabouts. And has a gun. Oops.

Anything that involves glitter, glue, dye or any combination thereof. Proof that karma is a bitch, the same year I gave that little girl’s dad an Anxiety Attack In A Jewelry Box, my two-year-old came home from a classroom birthday party with a favor bag containing a bottle of red glitter glue and one of those paddles with a ball attached to an elastic band. Glitter and glue are two items that should never be anywhere near a two-year-old. It’s been six years, and I’m still looking for THAT mom so I can smack her with her own paddle.

* If you want her to EVER speak to you again.

A version of this story originally appeared on Lifescript’s Health Bistro blog.